The Newsreader shows an industry, and a country, on the cusp of change 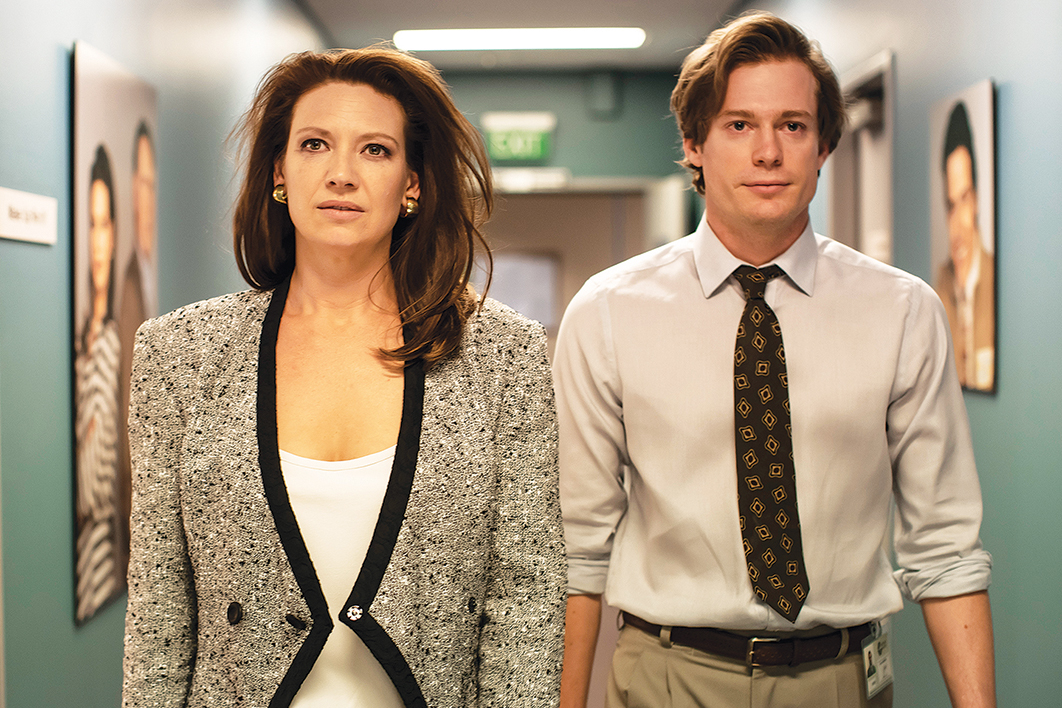 It might be an alarming thought for those of us who still imagine the 1980s as the recent past, but the ABC’s The Newsreader may well be the first series from that decade that takes us into the realm of period drama.

This six-part series is the latest in a long line of TV series and telemovies set in Australia’s 1980s, including dramatisations of the magazine industry (Paper Giants: Magazine Wars) and the lives of prime minister Bob Hawke (Hawke), ultramarathon runner Cliff Young (Cliffy) and rock group INXS (INXS: Never Tear Us Apart). Each appealed to the nostalgia of two groups who have money to indulge their taste for it: boomers and generation Xers, who were either young or middle-aged during that decade.

But more years have passed, making The Newsreader as much period drama as The Doctor Blake Mysteries, or — going back further — the long-running serial The Sullivans. The latter, set in Melbourne in the second world war, began screening about three and a half decades after the beginning of that conflict. The Newsreader is set in 1986, thirty-five years ago.

Centred on a television newsroom, the romantic drama at the show’s heart involves “difficult” star newsreader Helen Norville, played by Anna Torv, and ambitious up-and-comer Dale Jennings (Sam Reid). It is hard to avoid the parallels with the American romantic comedy Broadcast News (1987), in which the telegenic “star” is the blond, glitzy and shallow newsreader Tom Grunick, played by William Hurt. That film’s romance lies in the triangle between Grunick, the talented and highly strung Jane Craig (Holly Hunter) and the intellectually substantial but physically unremarkable Aaron Altman (Albert Brooks), who is destined to be the also-ran in both his professional career and his love for Jane.

The Newsreader’s Helen combines many of the qualities of Broadcast News’s Tom and Jane. Like Tom, she is glamorous, popular and an on-screen natural: the cameras love her. Like Jane, she lives for her work, she wants news to be more substantial and serious, and her private life is a bit of a disaster. Dale is likeable and handsome in a slightly dorky kind of way — the kind of colleague who is subjected to good-natured teasing to his face and mild ridicule behind his back. He keeps a videotape collection of all his TV appearances, has worked a little too hard to get his voice right, and blows his first chance to read an “update” by reading too fast — a colleague suggests he’d make a great race caller — and then too slow. (I was again reminded of Aaron in Broadcast News who, finally given the chance to read to camera that he had long craved, sweats so profusely that he seems in danger of collapse.)

A love triangle is developing in The Newsreader, too, although not one that would have been risked in a mainstream comedy like Broadcast News. Gay cameraman Tim (Chai Hansen) is sufficiently obsessed with the developing relationship between Dale and Helen to let Dale know that his interest is other than platonic. And there are plenty of hints that the boyish Dale’s sexuality remains somewhat unresolved.

TV often evokes past times through their consumer technologies, and the 1980s — the last decade before the digital revolution — especially so. At the beginning of the first episode, the producers of the 6pm news have a mishap with some footage on a video cassette: a replacement has to be made. Messages arrive on fax machines — more than the computer, the key office technology of the era. Our eyes are assailed not by bright pastels of the kind often used to evoke the 1960s and 1970s but by the relentlessly subdued beiges, tans and fawns of wood-panelled settings, if not of Jane’s spectacular shoulder pads.

But the office politics speak to our own times as much as the 1980s. Those who have the most power are male, stale and pale; I’m no expert on the subject, but I have a feeling this world wouldn’t be completely unrecognisable to today’s journalists. The experienced boss, Lindsay (William McInnes), is both exasperated with Helen and dependent on her for ratings — and ultimately protective of her in an old-fashioned way that is tinged with the hint of sexual attraction. The male anchor, Geoff Walters (Robert Taylor), evokes something of the gravitas of the two venerable Brians of 1980s TV news in Australia, Henderson and Naylor; but his insecurity and taste for intrigue mean he can’t quite pull it off. His highly ambitious wife Evelyn (Marg Downey) stokes his ambitions, convincing him that great days are still ahead for him.

Women’s power is more fragile, uncertain and conditional. Helen drives a hard bargain, but because she teeters on the edge of falling apart she never quite carries the freight of that very 1980s figure, a woman succeeding in a man’s world. Perhaps better evoking women’s professional life in that era is Noelene (Michelle Lim Davidson), a Korean-Australian, who is seemingly the newsroom’s most competent employee. It’s clear she’s going to spend a career being taken for granted and cleaning up after people like Rob Rickards (Stephen Peacocke), a likeable enough Aussie sporting jock without too many social graces who seems to be vaguely sweet on her.

Each of the three episodes so far has centred on a historical event evocative of the time: Halley’s Comet, the Challenger space shuttle disaster, and the release of Lindy Chamberlain. In this weekend’s episode, it will be the wedding of Prince Andrew and Sarah Ferguson paired with the bombing of the Russell Street Police Station. All sorts of other period references are strewn through the first three episodes: Paul Hogan makes an early, obligatory appearance as Australian of the Year, and it isn’t long before we are discussing AIDS and, on a lighter note, the new butterfly enclosure at Melbourne Zoo and the Cabbage Patch Kids.

There is something slightly fetishistic about all of this: the effect is sometimes like “We Didn’t Start the Fire,” that Billy Joel song packed with historical references. But history is essentially used as a way of orienting and providing the setting for the romantic drama. No one is likely to come out of The Newsreader with a much better understanding of the 1980s than they already have, and it is hard to imagine anyone who didn’t live through the decade making much of the many events that are referenced.

The Newsreader is enjoyable enough, sometimes funny, pleasingly nostalgic and well acted. The writing is engaging rather than sparkling. But perhaps the gestures to banality are part of the point, for the series is self-conscious about the stereotypes, clichés and fictions in which television news trades, then and now. And it is in its evocation of that media world — one that was on the cusp of radical transformation — that The Newsreader might be at its sharpest. While it is hardly an elegy, its characters do sometimes appear to be sleepwalking into a night that will bring to their cosy little world greater terrors than anything their own times were capable of sending their way. •

Frank Bongiorno is a historian at the Australian National University and author of The Eighties: The Decade that Transformed Australia (Black Inc., 2015). He is writing a history of the political lives of Australians.

The Chair’s portrayal of academic life has a blind spot 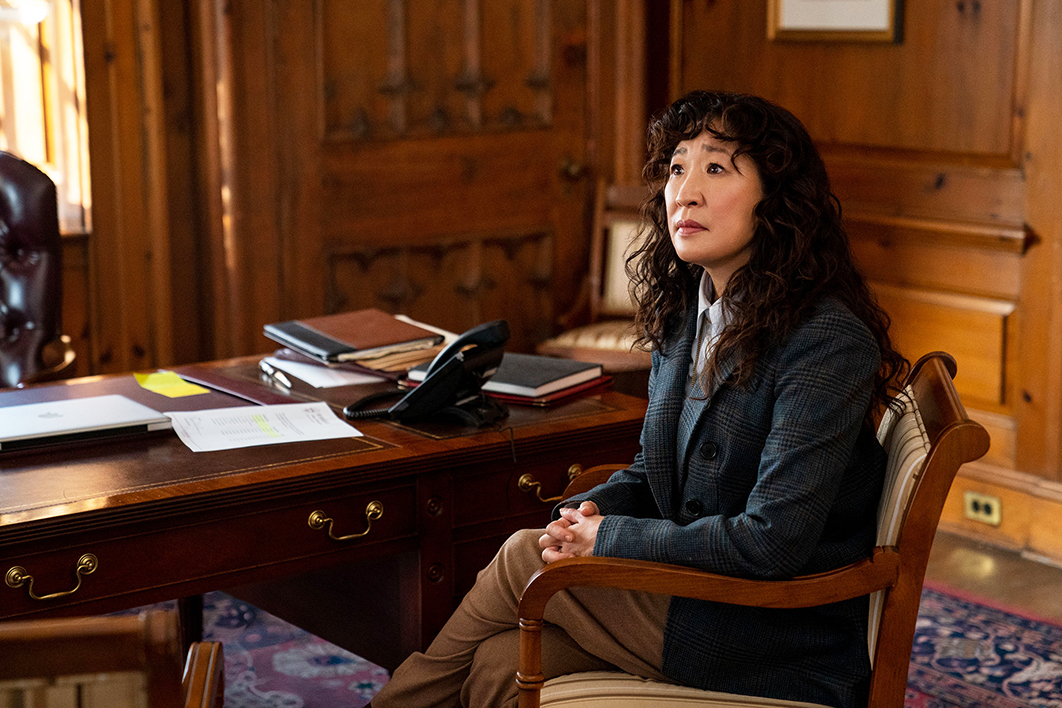