Writers writing about writers and writing 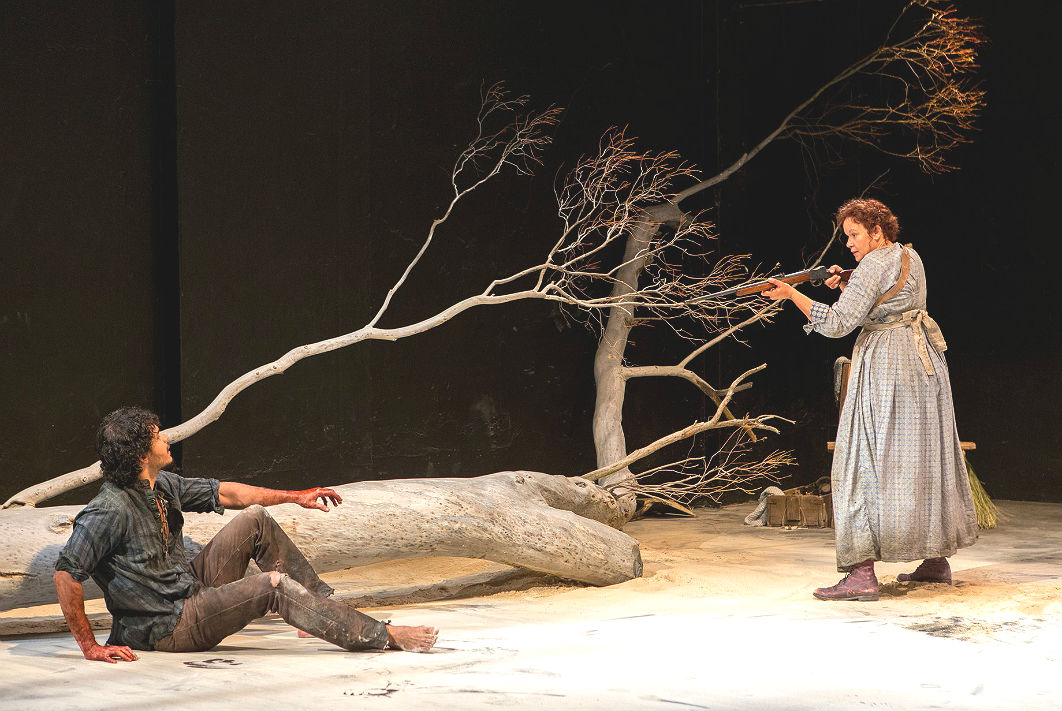 Blown out of the water: Leah Purcell (right) with Mark Coles Smith in Purcell’s adaptation of The Drover’s Wife. Brett Boardman/Belvoir St Theatre

A Wife’s Heart: The Untold Story of Bertha and Henry Lawson
By Kerrie Davies | University of Queensland Press| $29.95 | 256 pages

The recent award of the Prime Minister’s Prize for fiction to Ryan O’Neill’s Their Brilliant Careers: The Fantastic Lives of Sixteen Extraordinary Australian Writers came as a surprise — not because the novel isn’t clever and well-written, but because it is directed at literary readers, at the kind of people who know their literary history and can enjoy the book’s jokes about Australian writers’ lives. It seems like a return to the metafictional enthusiasms of the 1980s and 1990s with its references to Nabokov, Borges and Perec, and its imagining of an Australian Kangaroulipo movement, modelled on the French oulipo enthusiasts for Alfred Jarry’s pataphysics. O’Neill invites his readers to laugh at the parallel lives of his imagined Australian authors, including Nobel Prize winner Matilda Young, the “Chekhov of Coolabah’’ (a kind of anti–Henry Lawson), and the plagiarist Frederick Stratford, a customs officer who rebranded banned works by Guy de Maupassant, James Joyce and others for the Australian public. The novel plays with what we know about our literary heroes, but it also reprises the furphy that our literary culture promotes a range of phoneys, hoaxers and imitators.

Frank Moorhouse’s The Drover’s Wife occupies similar territory. Its collection of stories, parodies and critical essays riffs in various ways on the Lawson short story. Some of the pieces are “genuine” items of literary criticism and journalism, some are fictions that do no more than reference elements of Lawson’s story, others shift into the double imaginary world of metafiction and parody. O’Neill is represented in this collection by an extract from his 2014 PhD thesis on experimental short fiction in Australia, one of the straight critical articles Moorhouse features. A 1980s atmosphere is present here, too, in the games the writers play with Lawson: the frolic documented here began back in 1975 with a story by Murray Bail.

Moorhouse begins with the thirteen-page 1896 version of Lawson’s story, which must then bear the weight of the accumulated speculations and fictions that follow it. He takes an editor’s privilege of writing five introductory pieces about the background to the story, its representation of women and “sexual tension,” Lawson’s “gender precariousness” and the changes to the original versions of the story, in particular its depiction of Aboriginal people. These culminate in Moorhouse’s own take on Lawson — that his intense friendship with his mate Jim Gordon may have been sexual.

Moorhouse argues for a gay Henry Lawson whose relationship with Gordon, recently examined in Gregory Bryan’s Mates: The Friendship that Sustained Lawson, represented an intimacy never broached directly in his writing. He imagines a kind of Brokeback Mountain relationship, giving a romantic gloss to mateship on the track. While their wives stay home with the children, the mates are imagined enjoying a consoling sexual intimacy. Moorhouse is open about his reasons for seeking this reading of Lawson: it speaks to his own experience of a sporadic sexual relationship with another man through their years of marriage to, or uncoupling from, women.

Another recent book on Lawson, Kerrie Davies’s A Wife’s Heart: The Untold Story of Bertha and Henry Lawson, reads the writer’s life from an opposite direction but with an equally personal perspective. Davies projects her own experience of a retreating husband and single motherhood onto Lawson and his wife, Bertha. She does sterling archival research to expose Lawson as a drunken wife-beater, incapable of supporting his children. Bertha comes out of this version of their story as a heroic survivor, rather than the widely accepted figure of the vengeful wife who put her husband into prison for his failure to provide maintenance.

It seems futile to protest that these readings are ahistorical: that the frequent comments during his lifetime on Lawson’s “effeminacy” do not imply homosexuality, or that Davies’s recent experience of single parenthood is a cakewalk compared to Bertha’s battles in the days when women’s access to work was restricted and social services virtually non-existent. Of course, it is possible that Lawson could have beaten and confined his wife, abandoned his children, run off with the maid, drunk himself to incompetence, and also had an enduring sexual relationship with his mate. How does this change how we read his stories? Reading emerges from these books as a various, individual experience in which a reader can select whatever he or she likes from a story. The pieces collected in Moorhouse’s book offer us a series of these readings, most of them ironic and skewed to a sexual interpretation of the story.

The story by Bail that set this metafictional game in train was inspired by Russell Drysdale’s 1945 painting, a painting that has nothing to do with Lawson’s story of a woman abandoned in an isolated bush hut with her children, apart from its name. Drysdale’s woman is on the track with the drover. There are no children in sight, and Bail writes in the voice of her abandoned city husband, who has been left to care for them. The story wipes away all Lawson’s concern for the isolated and endangered woman, turning it into a comedy of masculine indignation. In 1980, Moorhouse replied to Bail’s speculations with a “conference paper” by an Italian-Australian literature expert, Franco Casamaggiore, who had fallen for the sex-with-sheep jokes of visiting Australians. The poor Italian scholar elaborates on the links between the painting and the story and the identification of the wife with a sheep. Lawson’s fragile story sinks beneath the weight of this boyish mockery.

Women writers challenged these parodies, with Barbara Jefferis publishing her version later in 1980, and Anne Gambling writing a contemporary version in “The Drover’s De Facto” in 1986. That year, Damien Broderick joined in with the voice of the dog, who begins: “Call me Alligator.” Ten years later the game was taken up by Mandy Sayer and David Ireland, both writing about the painting, with another flurry of parodic stories dating from 2006 to the present. I fervently hope this hasn’t become a standard exercise in Australian creative writing courses.

Moorhouse brings together all these versions and variations, regardless of their merit or interest. Most of them are fun to read, with Louisa Lawson’s essay “The Australian Bush-Woman” standing out as more detailed and impassioned than her son’s famous story — though we know that he based it on his mother’s experiences in the bush. The longest piece in the collection, Madeleine Watts’s “Afraid of Waking It,” is also the strongest, though its story of the exploitation of a lonely young woman by a pair of old artists makes only tangential allusions to Lawson as it tracks its way around the inner west of Sydney.

As one might expect, Moorhouse emphasises sexual rather than political responses to Lawson and his writing. He takes little note of the reference to the drover’s being a failed squatter, a “careless” man like Middleton in Lawson’s poem “Middleton’s Rouseabout”: “Type of a careless nation/ Men who are soon played out/ Middleton was.” I would like to speculate that the drover’s wife followed Louisa Lawson’s example and headed for the city with her children, like so many others, as drought and economic depression took hold by the 1890s, but then I would simply be adding my own contribution to the thread.

Much more important is the postcolonial, Indigenous reading Leah Purcell brought to the story with her 2016 play of the same title. Moorhouse includes the notes by Purcell and the play’s director, Leticia Cáceres, from the recent Currency Press edition of the play. The play must have been produced just as Moorhouse was completing his book, and one can sympathise with his difficulty in trying to include some notice of it here.

These notes give only a sketchy idea of Purcell’s drama, which blows previous versions of the story out of the water. She imagines her drover’s wife armed with a gun, facing up to the swagmen and troopers who come her way and ready to protect the Aboriginal man who calls on her for help. She is both a more abused and a much more formidable figure than the women in the other stories, and the secret she is hiding is redolent with anger and violence. Her son’s declaration that he “won’t never go drovin’” amounts to a commitment to join her in outlawry.

Moorhouse struggles to come to terms with the racism evident in the changes Lawson made to his original story, which expanded the references to the midwife “Black Mary” sent by “King Jimmy,” and described the Aboriginal man who built the wood heap as “the last of his tribe and a King.” He calls these additions “coarsened music-hall caricatures” and is disappointed that Lawson seems to have approved them. He recalls that he accepted, as a child, the conventional wisdom that Aboriginal people were dying out, despite the presence of Aboriginal children in his primary school class, but he undermines his good intentions by adding, “Now it is the Anglo-Saxon tribe that is dying out,” with an unfortunate echo of the familiar white nationalist rhetoric.

This proliferation of writers writing on writers suggests that publishers have lost faith in the ability of academic critics — the people Moorhouse generously calls scholars — to offer interesting or helpful readings of Australian writing. Perhaps all the arguments about literary theory and identity politics have drawn them away from the task of clear explication of the fiction of their compatriots. Perhaps it is simply more exciting to publish a creative response to a work of literature rather than a close reading by a self-effacing critic. This is a matter of personal concern, as I edit a series of books intended to give academic scholars the chance to examine the work of Australian writers at length; it seems to be pushing against an overwhelming preference for personal responses from other fiction-makers.

With its series of essays by writers on writers, Black Inc. has joined this trend, beginning with Alice Pung on John Marsden and Erik Jensen on Kate Jennings. Each of them addresses the writer in question, making a sustained case for admiration of the work. At a time when some parents have criticised the gloominess of the texts set for high school students, Pung insists that it is important that teenagers are exposed to the darker side of life, especially when they are likely to be struggling with difficult personal circumstances.

Jensen wears his heart on his sleeve, declaring Jennings’s Snake to be “the great Australian novel.” His interviews with the writer suggest a friendship that extends to sympathetic reading of her fiction. His essay is clear, entertaining and full of interesting context that will send readers looking for Jennings’s work. “Snake failed to find an audience,” he tells us. “It never had a good cover, its subject was unfashionable. Several times it was described as a descendant of Henry Lawson’s short story ‘The Drover’s Wife’.” Of course, a section of Snake appears in Moorhouse’s book.

These essays appear to be a return to what was once called “literary appreciation,” criticism that engages with the writing and reads it sympathetically in context. They are a welcome addition to the array of responses to Australian writing, most of all because they are an invitation to go back to the original writing and read it for itself. ● 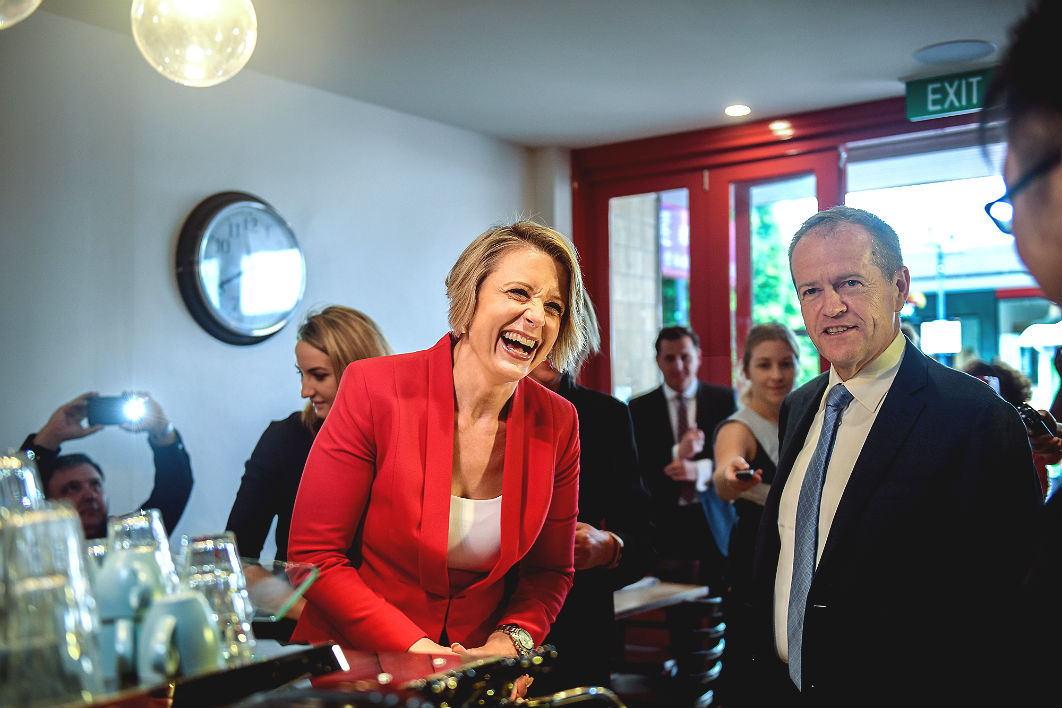