Yes, it is our ABC

The gulf between the views of the public and the ABC’s vocal critics is large and growing, writes Rodney Tiffen 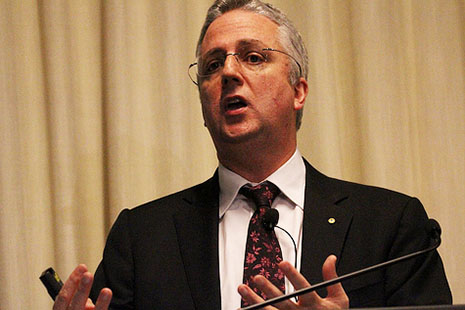 RUPERT Murdoch’s Australian newspapers are not going gentle into that good night. Although their lamentable circulation performance suggests that grim days await them, their rage is undiminished. And the Australian has maintains a particular rage against its most enduring target, the ABC.

In recent weeks the paper has published almost twenty stories about the pay packages of prominent ABC broadcasters – packages that pale beside the remuneration rates seen as unremarkable among its commercial competitors. But that was just a prelude to its more intense coverage of the decision by the Guardian and ABC to publish leaked material revealing how Australian intelligence had tapped into the phones of, among others, Indonesia's President Yudhoyono and his wife.

The leaks provoked intense diplomatic tension between Australia and Indonesia, and commentators in the Australian were overwhelmingly of the view that they should not have been published by the ABC. With its usual percussive campaigning, the paper found many ways to hammer its theme of ABC irresponsibility. On Tuesday this week, for instance, the topic took up more than half the paper’s front page, and included a very long article claiming that “some” have claimed that ABC chief executive Mark Scott and Guardian editor Alan Rusbridger are involved in a “bromance,” evidenced by the way that they are “praiseworthy of each other” – yes, “praiseworthy” – in private and public.

On Wednesday, the media in general, and the Australian in particular, reported the strong criticism of the ABC and its left-wing bias expressed at Tuesday’s meeting of the federal parliamentary Liberal Party. Among the variety of sanctions proposed was Senator Cory Bernardi’s suggestion that the internet publishing activities of the “taxpayer-funded behemoth” should be terminated.

The echoes of the Howard era are almost deafening. During the 1996 election campaign, the Coalition foreshadowed a public inquiry into commercial television and promised to maintain the ABC’s funding levels. Once elected, it quietly abandoned the inquiry into commercial TV and then, citing the budget deficit, announced a major inquiry into the ABC, with its main term of reference the need for the national broadcaster to adapt to a reduced budget. What the head of the inquiry, Bob Mansfield, discovered was the strength of public affection for the ABC. In the end, he recommended cuts to international broadcasting (which would not offend substantial domestic constituencies) and changes to how the broadcaster managed its properties, a recommendation that was thankfully ignored.

With its public harassment and its appointment to the ABC board of ideologues who lacked any sympathy for the national broadcaster’s mandate, the Howard government inflicted considerable damage. A funding squeeze meant that the ABC’s budgets declined relative to its major commercial competitors. But the strong public regard for the ABC that Mansfield had discovered was its major protection against stronger frontal attacks.

If the contrast between vocal opinion (as represented by conservative Liberals, News Corp newspapers and commercial talk-radio announcers) and public opinion was wide in 1996, it is almost unbridgeable now. To get a sense of how out-of-step the ABC’s loudest critics are, it’s useful to begin by looking at public opinion about the media as a whole.

The Australian Election Survey, conducted after the 2010 election, asked respondents to express their degree of confidence in thirteen different groups and institutions. The armed forces came top, with 91 per cent expressing either a great deal or quite a lot of confidence. Perhaps surprisingly, universities came next, at 80 per cent. The two institutions at the bottom were television (23 per cent) and, still lower, the press (17 per cent).

Although opinion polls show great variation depending on the phrasing of survey questions, the general theme is scepticism about the media’s performance. In May 2011, for instance, Essential Media – which now polls regularly on this issue – found that only 35 per cent of respondents agreed with the statement that the media usually report the news accurately, while 54 per cent disagreed. On the question of whether the media usually report all sides of a story, the split was an even more unfavourable 21–69. On their capacity to hold politicians accountable, the media did better, almost evenly split 45–43.

Sometimes public regard for the media is even lower than might be imagined. Following the Abbott government’s travel rorts scandals in October, Essential asked respondents to rate ten industries and organisations as either “extremely corrupt,” subject to “some corruption,” or “not at all corrupt.” The media topped the list with a 34 per cent “extremely corrupt” rating, just ahead of government, on 32 per cent, and building and construction, on 25 per cent.

Contrasts in attitudes to individual news organisations are equally interesting. In a 2010 online survey conducted by Polimetrix, which I designed with David Rowe and Paul Jones, respondents were asked to rate ten different groups and organisations on a “feeling thermometer,” with a higher rating indicating more favourable feelings. The ABC rated highest, with a mean of 6.7, and commercial TV coming second, on 6.0, ahead of the two major political parties Labor and Liberal on 5.0. News Limited newspapers rated 4.8 and commercial talkback radio 4.7, both well ahead of the bottom-rating group, asylum seekers, on 3.4.

When Essential asked respondents to rate their trust in sixteen institutions and organisations in March 2013, the High Court rated highest at 74 per cent; the ABC came second, at 70 per cent, ahead of the Reserve Bank (64 per cent) and charitable organisations (52 per cent). The TV news media came in ninth, at 30 per cent, and newspapers were eleventh, at 27 per cent. The same question had been asked two years in a row, and the ABC’s rating has been heading up, while TV news and newspapers remained broadly flat.

In August, Essential posed a more focused question about trust in media coverage of the 2013 election. Contrasting those who had a lot and some trust, with those who had not much trust and no trust at all, ABC TV ranked highest with a 58–17 ratio, while commercial TV had a 29–53 ratio. Among newspapers (according to respondents in the relevant state for each title), the Age had the best ratio (42–34) and the Sydney Morning Herald ranked second (39–37). The Australian split evenly (31–31), while the Murdoch tabloids were well into net negative ratings – the Herald Sun 30–51; Daily Telegraph 25–49 and Courier Mail 23–41.

Essential had carried out a similar survey in July 2011, but had only asked people to rate newspapers they regularly read. All came out on the positive side of the ledger, but there was quite a hierarchy: the Age was at the top (79 per cent of its readers expressing trust; 18 per cent distrust); then the Sydney Morning Herald (74–25); the Australian (69–27); the Courier-Mail (65–34); the Herald Sun (54–44) and last the Daily Telegraph (52–46). Among these respondents, in other words, almost half of its own readers didn’t consider the Telegraph trustworthy.

The generally high regard for the ABC carries over into support on particular policy questions. For example, in our 2010 Polimetrix survey, 80 per cent thought that in the modern world public broadcasting was still important, with only 6 per cent thinking its time had passed. In June 2013, an Essential Poll found a clear majority (57–15) opposing privatisation of the ABC and SBS. In October 2012, Essential reported that 34 per cent thought the ABC should receive more funding, with another 32 per cent considering current levels about right and only 17 per cent believing it should receive less funding.

A consistent – indeed a stark – picture emerges from this polling data, but it is not one you are likely to see highlighted in the Australian. The public has little confidence in the news media as a whole, and the ABC is, overwhelmingly, the most trusted and respected media institution in the country. •

Rodney Tiffen is author of News and Power (Allen and Unwin) and Scandals: Media, Politics and Corruption in Contemporary Australia (UNSW Press). His new book, Rupert Murdoch: A Reassessment, will be published in February by NewSouth.