Zimbabwe steps into the future

Regardless of the result, this week’s election has pressed the post-liberation reset button 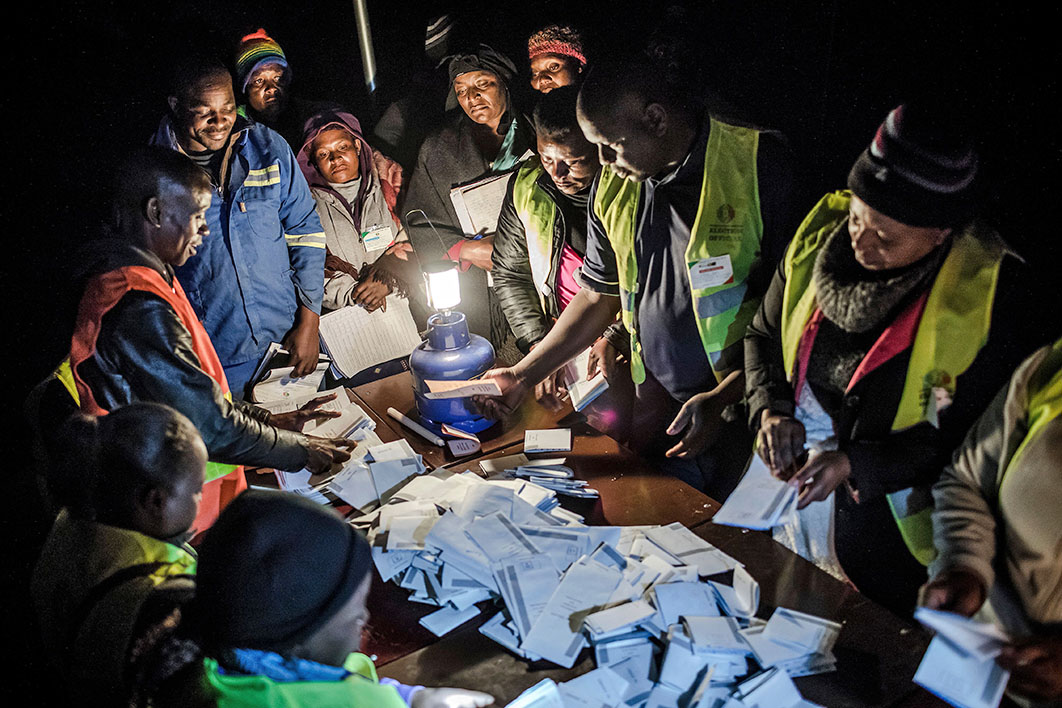 Another step: observers check votes at a polling station in Mbare, a suburb of Zimbabwe’s capital, Harare, on Monday. Luis Tato/AFP/Getty Images

More than three-quarters of Zimbabweans have only known one presidential election result: a victory for comrade Robert Gabriel Mugabe. Until this week, that is. Last November’s “not a coup” replaced Mugabe with his former deputy Emmerson Mnangagwa, who had gradually but decisively been assuming control of the levers of power. While some commentators anticipated that the elections would be postponed amid the upheaval of changing leaders for the first time since liberation from white minority rule in 1980, Mnangagwa stuck to the 2013 constitution’s timetable and elections were held on Monday. For the first time, the former deputy headed the ballot for the ruling ZANU-PF party.

Mugabe’s departure is not the only novelty of this ballot, which was held on the same day as the country’s parliamentary election. Also missing was Morgan Tsvangirai, stalwart of the opposition Movement for Democratic Change, or MDC, who contested the presidency in 2002 and at every election since. Tsvangirai carried considerable moral authority in the early years of this century, holding together a coalition of opposition, trade union and progressive forces, and bearing the scars of beatings at the hands of ZANU-PF. After he was denied an official victory in the 2008 elections, the outcry installed an internationally brokered national unity government that survived until the 2013 election.

By then, Tsvangirai’s lustre had waned, and since then his coalition has only become more fractured. He died in February this year.

Inheriting the MDC mantle is lawyer Nelson Chamisa, contesting these elections for the seven-member MDC Alliance. Chamisa turned forty earlier this year, only just attaining the age qualification for presidential candidates. In a society where deference to age is deeply ingrained, Chamisa’s youth has presented a challenge. On the up side is the desire for generational change in leadership and the appeal to an overwhelmingly youthful population (although a quarter of the population is under eighteen and too young to vote).

Chamisa’s relative youth is not the only factor that made his MDC inheritance a contested one. His ascension pushed aside a senior female MDC figure, Thokozani Khuphe, who had been Tsvangarai’s deputy and served as deputy prime minister in the national unity government. The boys’ clubs (young and old) on both sides of politics have been increasingly exasperating for the many highly competent and energetic female politicians who have been kept just below the pinnacles of power.

Khuphe contested the validity of Chamisa’s assumption of the MDC leadership, presenting as a candidate in these elections for MDC-T (the “T” standing for Tsvangirai, as opposed to an earlier iteration of splits in the party, the MDC-N, headed by Welshman Ncube). Khuphe also labours under the burden of coming from the minority Ndebele population, which predominates only in the south of the country.

Another high-profile woman among the twenty-three candidates for president was Joice Mujuru, who was a very young firebrand in the liberation struggle. Her rise to the vice-presidency in 2004 came at Mnangagwa’s expense, and she was dismissed by Mugabe in December 2014, probably because she was becoming too popular within ZANU-PF. Her attempts to form a strong rival party — initially People First and subsequently the People’s Rainbow Coalition — struggled to gain traction.

For his part, Mnangagwa has spent the eight months since his ascendency to the presidency assiduously assuring Zimbaweans that a new era is under way. He has repaired relations with the international donor community, maintained close relations with China, declared Zimbabwe newly open for business, and even held a meeting with white farmers to assure them of a role in restoring Zimbabwe’s place as the region’s breadbasket.

On the ground, however, there’s a sense that little has changed. The economic challenges remain profound, chief among them the task of stimulating growth when you don’t have your own currency. (Since the hyperinflation of 2008, Zimbabwe uses the US dollar.) Corruption persists as a threat to progress at both micro and macro levels. And any future government will have to chart a course between encouraging inflows of money and becoming dependent on development assistance.

Western development agencies congratulate themselves on squeaky-clean funds distribution, but their practices often induce a different kind of corruption of the spirit. Money flows to projects whose objectives are set by the external donor, local recipients become practised in the art of telling the donors what they want to hear, and the hard choices in resource-constrained environments are never faced.

Mnangagwa has sought to reinvent himself as the technocrat best able to navigate these choppy waters. Indeed, he may well be able to position Zimbabwe to benefit from the contest for supremacy between China and the West. He has set his face assuredly to the future, not least because his past includes the 1980s Gukurahundi killings, which obliterated the Ndebele as a political force.

At the time of writing, the outcome of the presidential election has yet to be declared, but ZANU-PF has gained a handy majority of seats in the parliament. If Chamisa happened to win the presidential vote, it would be a shock equivalent to Mohamad Mahathir’s return to power in Malaysia.

The MDC Alliance leader would face all the same challenges as Mnangagwa, but may be less well-placed to overcome them. His campaign showed some worrying signs. He has cloaked himself in a facile religiosity, accompanying many of his campaign tweets with the hashtag #godisinit. In 2016 he graduated as a pastor from the same theological college that has produced some of Zimbabwe’s more prominent self-appointed “prophets,” hugely popular in Zimbabwe with their combination of prosperity gospel and fire and brimstone.

Chamisa was able to attract crowds over the course of the campaign, but many of his promises — high-speed rail, US$15 billion of investment from America (denied by the US embassy), rural airports to air-freight produce to Europe — were fanciful. When he claimed to have been endorsed by Rwanda’s president, Paul Kagame, the response from Kagame was to say he’d never met him — and Chamisa’s riposte, a tweet of a photo showing him shaking Kagame’s hand at a public occasion, was hardly convincing.

But if the Zimbabwe Electoral Commission does declare Chamisa the victor, it will dispel any fears it is prepared to rig elections for the government. By contrast, if Mnangagwa is declared victor, the MDC Alliance is already preparing the ground to declare itself robbed. Within hours of the polls closing, social media was flooded with claims Chamisa had won, along with purported tally sheets from electorates and claims that Mnangagwa had fled the country.

Meanwhile, like a hammy actor prolonging his death scene on stage, Mugabe gave an election eve press conference to declare he would not support the ZANU-PF candidate. Amateur theatrics is the last thing Zimbabwe needs now.

In the reality-based universe, the Zimbabwe Electoral Commission appears to have been doing a thorough and diligent job. International election observers are on hand to give assurance, regardless of the outcome. Whatever the next couple of days hold, Zimbabwe will have taken another major step to forge its future. ●

Update: Following the Electoral Commission’s announcement of the substantial parliamentary majority for ZANU-PF, running street battles between MDC Alliance supporters and police broke out in Harare. The army was called out to suppress unrest with force, and three people were shot dead. Underlying the protests are the high levels of frustration at the lack of real change in the country. Announced results also showed major divisions across the country, with some overwhelmingly MDC-supporting areas and a (larger) number of areas solidly behind ZANU-PF candidates.

The fact that the MDC Alliance was loudly proclaiming victory even as polling booths closed suggests it is trying to recreate the 2008 international outcry at a stolen election. To date, though, criticisms of the poll from international observers have been muted. The European Union’s election observer mission lamented the biased coverage of the election campaign by the state media, but at this stage has made no criticism of the vote count, although it reserved the right to make a final report in three months.

For its part, the Electoral Commission has attributed the delay in announcing the presidential poll result to the unprecedented number of candidates, all of whom have the right to send scrutineers to check the collated ballots. By the time the presidential vote is announced — and given the parliamentary results it will almost certainly be a strong win for incumbent Emmerson Mnangagwa — the government will be hoping the violence has burnt itself out.

Michael Bartos is an independent researcher based in Portland, Victoria. He spent seventeen years as a senior United Nations official, including serving as UNAIDS Representative in Zimbabwe from 2013 to 2016.

Towards an Indigenous Voice

The committee’s report represents a mature and respectful response to the Uluru Statement. Lukas Coch/AAP Image 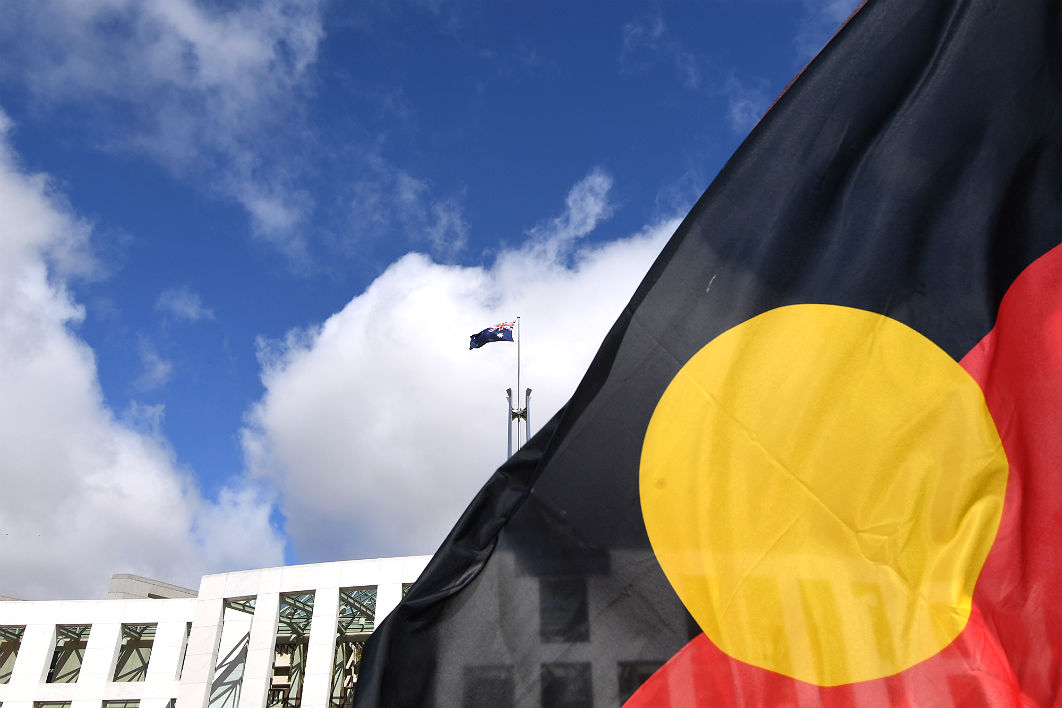 The committee’s report represents a mature and respectful response to the Uluru Statement. Lukas Coch/AAP Image