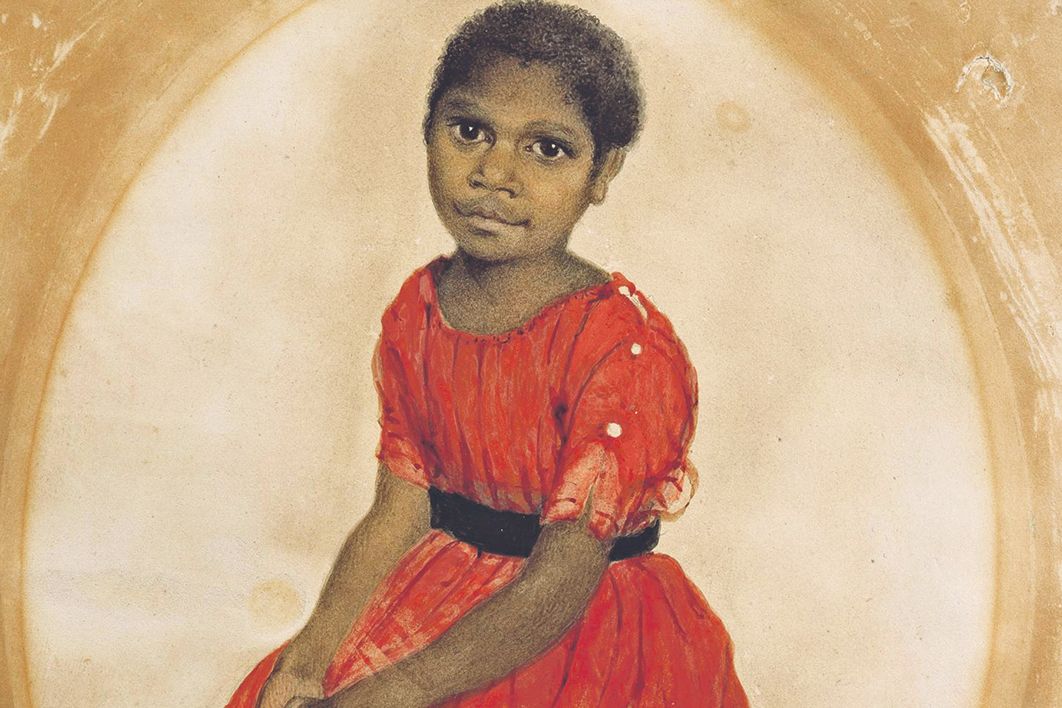 Taken from her own people as a young child and exposed to the luxurious but alien environment of Government House in Hobart, Mathinna experienced both the best and the worst conditions faced by Tasmanian Aborigines in the mid nineteenth century.

A member of the Port Sorell group of Tasmanian Aborigines, she was born around 1835. Tasmania’s Black War had ended, and her father, Towterer, and mother, Wanganeep, had been among the many Aborigines moved to Flinders Island by the Europeans in the early 1830s. There, the Aboriginal death rate would prove to be catastrophic. When Towterer died in 1837, apparently of consumption, the commandant, George Augustus Robinson, noted that he left a wife and an infant child whom the authorities called Mary. Wanganeep married Palle, of the same Aboriginal group, but she herself died in 1841, when Mathinna was six.

Jane Franklin, wife of the governor of Van Diemen’s Land, had developed an interest in the Tasmanian Aborigines. Like almost all the British, she believed in the “great chain of being,” a ranking of races that predated evolutionary theory, with Europeans at the top and everyone else in descending order according to their degree of observable “civilisation.” Indigenous people were seen as scientific curios and Franklin wanted to learn as much as she could about them. It was this thinking that led Europeans to take children in “for their own good,” creating the first generation of stolen children. Franklin was one of the earliest Europeans to try her hand at “Europeanising” Indigenous children.

The Franklins visited Flinders Island in 1838, and later that year Jane asked Robinson to send her a black boy. Robinson sent Timemernidic, a boy of about nine. Franklin left it to her stepdaughter Eleanor to teach him, and in October Eleanor wrote that “he is anxious to be able to read and write well.” Timemernidic “waits at table and does other little things,” she went on. “But unfortunately he is very idle and obstinate, so that it is difficult to keep him to his duty, unless he is constantly watched.”

Franklin was discouraged. “You have heard of my unsuccessful experiment to civilise a native boy,” she wrote to her sister Mary. Timemernidic was given a job as a seaman, and Franklin decided to try again with a younger and, she hoped, more malleable child, this time a girl. By 1841 Robinson had sent Mary to her.

“I could not learn her native name when she was sent to me,” Franklin wrote, “so I called her Mathinna after the name of a necklace made of shells which the natives string together & put on their neck.”

Mathinna lived in the schoolroom with seventeen-year-old Eleanor, who in May 1841 wrote to a cousin: “my little pupil Methinna (a native girl) is waiting for her lesson, and every few minutes interrupting me to shew me her work.” Mathinna dictated to Eleanor a letter to her stepfather Palle, back on Flinders Island.

“Said one day I do love my God,” added Eleanor. “I think she is affectate [affectionate] & intelligent.” From this description, Mathinna seems to have been lively and eager to please, and she had a kind and warm-hearted carer in Eleanor, who arranged a European playmate for the little girl. Before breakfast, Eleanor and her father would stroll in the garden while Mathinna, according to a bystander, “would be darting about, or climbing the trees with hand and toe, native fashion, peering down with wild bright eyes out of the lofty foliage.”

Franklin had Mathinna’s portrait painted by the artist Thomas Bock, noting that “she is dressed in a scarlet frock with a black leather girdle which sets off her naked black arms & legs to great advantage.” But Franklin became as disillusioned about Mathinna as she had been about Timemernidic, describing her as “very troublesome and disobedient” (she was eight). She “retains much of the unconquerable nature of the savage,” wrote Franklin, including “extreme uncertainty of will and temper, great want of perseverance and attention, little if any, self controle, and great acuteness of the senses and facility of imitation.” Why Franklin’s view of Mathinna was so different from Eleanor’s is not clear, but Eleanor certainly exhibited greater sympathy and understanding.

By July 1843 Franklin had had enough of Mathinna and sent her to the Orphan School in Hobart. Later that year the Franklins returned to England, and there is nothing in the records to suggest that the girl had any chance of accompanying them.

Mathinna was returned to the Aboriginal settlement on Flinders Island the following year. By now Palle had died, and she had no family to care for her. In a letter written when Mathinna was twelve, the superintendent’s wife said that she was treated vindictively by the white staff, and was wretched, dirty and miserable. Shortly afterwards, the remaining Aborigines on the island were moved to a former convict station at Oyster Cove, south of Hobart, and the four girls in the group, including Mathinna, were sent to the Orphan School.

This seems to have been a happy experience for Mathinna. On one occasion, the governor’s wife, Lady Denison, visited the school, and the girls showed her a native dance and sang an Aboriginal song and an English hymn. The matron professed to be treating them with indulgence, allowing them to follow their own devices more than other children because they could only be brought into civilised habits by gradual degrees.

Mathinna might well have led a contented existence if she had been able to stay at the school. But in 1851, when she was fifteen, the authorities decided she was too old to remain there and should be removed to the Oyster Cove settlement or, “should anyone be willing to receive her,” taken into domestic service. No one was, apparently, so she went to Oyster Cove.
This is the last definite mention of Mathinna in surviving documents. As far as we know, Franklin did not enquire after Mathinna, and the fact that her name doesn’t appear in any later record of Tasmanian Aborigines may indicate that the authorities were embarrassed by the fate of her protégée.

We do know that Mathinna died young, and it is likely that either of two recorded deaths at Oyster Cove refers to her. In their despair many Aborigines took to drink, and in 1852, Aminia (or Amenia, or Armenia), “a Native Aboriginal woman,” became drunk at the North West Bay inn and while walking home fell on the road with her face in a puddle. She was found dead the next morning. Was this young woman Mathinna, who would have been sixteen or seventeen at the time? Aminia is not mentioned anywhere else, either at the Orphan School or on Flinders Island.

But it was believed at the time that Mathinna committed suicide by drowning herself in the river, as the Mercury reported in August 1879: “Mathinna, the unfortunate favourite of Lady Franklin, who, after her patroness left the colony, passed through so many sad trials, which terminated in her committing suicide, by throwing herself into the River Derwent, where she was drowned.”

It would not be surprising: after being taken from her own people at seven, she was expected to fit into an alien, if reasonably kindly, environment at Government House. From the age of nine she had no family and no protector, and could fit into no community. She was made miserable back in the Aboriginal settlement, spent three or so years in the relatively mild though still alien Orphan School, then at only fifteen was returned to the badly run Aboriginal settlement, where there was no happy outcome for anyone. •

The Ambitions of Jane Franklin, by Alison Alexander, Allen & Unwin, 2014

Alison Alexander has worked as a freelance historian and as a lecturer and tutor in history at the University of Tasmania. Her biography of Lady Jane Franklin won the National Biography Award in 2014.

A comet across the feminist landscape 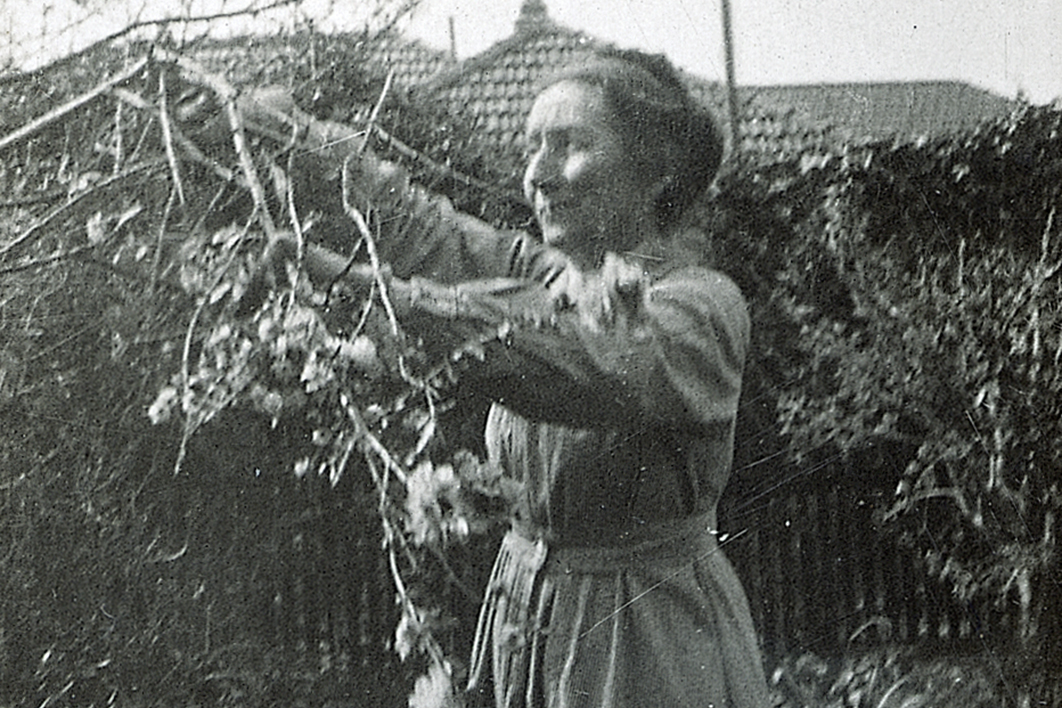