A transcendence that can’t be explained away 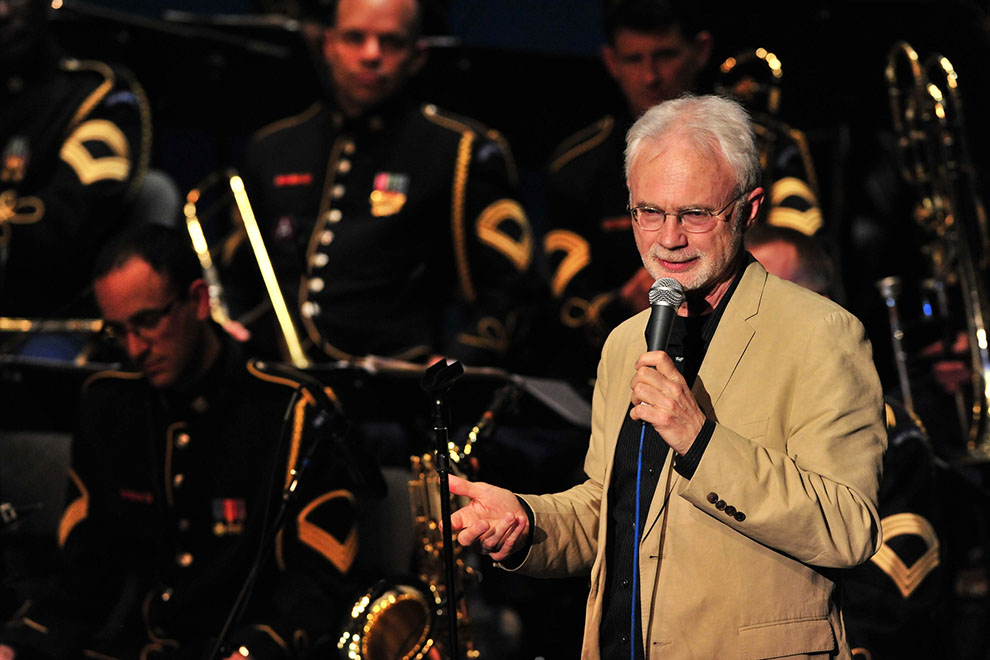 Versatility: John Adams with the United States Army Band at a performance in May last year. US Army Band/Flickr

John Adams is one of today’s most successful composers for the concert hall and opera house, producing a constant stream of new works that audiences welcome around the world. His music, unfailingly well-crafted, is a personal synthesis of all that has gone before. And yet I wonder if even his admirers fail to see his versatility. To Adams’s detractors, his is the brash, glib face of American post-minimalism, recycled affect dressed up in garish orchestration; and sometimes it seems that this, broadly speaking, is also what his fans believe. Except, of course, they think it’s a good thing.

Listening to the recent recording of his symphonic work City Noir (2009) and the new Saxophone Concerto (2013), you can certainly hear how it is possible to arrive at such a conclusion. In the former work, Adams takes the clichés of film noir – musical and otherwise – and renews them. There is something impressive about this ability to garner worn-out sounds and gestures and bring them back to vigorous life, and Adams doesn’t let you down in this regard. His music surges with colour and energy. It is just that I’m not sure how much I care (admittedly, it made me want to watch Double Indemnity again); and I’m not sure I care that much more when Adams puts saxophonist Timothy McAllister though his paces in a concerto that is partly a homage to bebop. No one alive does this sort of thing better than Adams, and both works receive blisteringly good performances from the St Louis Symphony under David Robertson. But, in the end, I do find the thrills disappointingly conventional.

Disappointing compared to what? Well, compared to some of Adams’s other music. There are, for instance, his earlier, more minimal works such as American Standard (1973) – three slow, rather spooky pieces that gently poke around in the undergrowth of popular music forms (marches, hymns and jazz standards), making them sound simple, but very strange. Or there are the equally minimal, but considerably more radiant Shaker Loops (1978) for string septet and Adams’s first orchestral piece, Common Tones in Simple Time (1979). It is not the minimalism I go for here, so much as the clarity and boldness of the music. City Noir uses a big orchestra brilliantly, but takes far fewer risks.

But in recent years, the composer seems to have found some of his older qualities again. In On the Transmigration of Souls (2002), his 9/11 piece, Adams leads us away from the thrust and sparkle of his other orchestral writing and back to the half-formed, half-forming pre-eloquence of American Standards. It is a perfectly judged musical memorial to the victims. But it is in El Niño (1999–2000) and The Gospel According to the Other Mary (2012), the latter also newly available on CD, that Adams seems most daring. Where El Niño, inspired by the dawning of a new millennium and concerning itself with renewal, is styled a “Nativity oratorio,” The Gospel According to the Other Mary is a “Passion oratorio,” and while both works are intended for the stage, they seem closer to the sacred choral works of Bach than the opera house. The clean lines and easy diatonicism that characterise these pieces take us back to Shaker Loops. They have their big blustering moments – no argument – but above all they are refreshing, direct and affecting, and they may well turn out to be the composer’s greatest legacy.

Like all Adams’s dramatic works, these oratorios are collaborations with the director Peter Sellars, and here again the Bach connection is important. As a director, Sellars has several times taken Bach’s choral works and staged them, his approach as close to dance as to drama. Indeed, he referred to his staging of the St Matthew Passion for the Berlin Philharmonic as a “ritualisation.” That pretty much describes his approach to these oratorios of Adams, where the stories are told by the singers more than acted out. There used to be a Hollywood convention that you didn’t show the face of Jesus – it was some sort of blasphemy for an actor to represent him, so you only ever saw his back or his feet. In The Gospel According to the Other Mary, we do not hear his voice, his words given instead to a trio of counter-tenors or the chorus or one of the three main characters – the siblings Lazarus, Martha and Mary Magdalene. That’s “the other Mary,” by the way, and she’s not the repentant whore of popular reputation, but a psychologically damaged woman with powers of intuition.

This oratorio is, above all, her story; we see Jesus’ death and much else through her eyes. In addition to words from the Old and New Testaments, Sellars, as librettist, has assembled his text from the writings of poets, novelists, mystics and social activists, nearly all of them female. Adams has said that Mary finds it impossible to disentangle the spiritual and the erotic, and in Louise Erdrich’s poem “Mary Magdalene,” which Adams sets here, she moves easily from one to the other as she washes Jesus’ feet, before delivering her alarming peroration: “It is the old way that girls / get even with their fathers – / by wrecking their bodies on other men.” Adams’s setting starts out sultry, then becomes passionate, but then, instead of building to a climax with Erdrich’s last lines, he pulls back, having the singer deliver those final words quietly. But nothing can stop that climax and it arrives, moments later, as the chorus sings Hildegard of Bingen’s “Antiphon for the Holy Spirit.” It’s a hymn of redemption, but also of life, and Adams doesn’t hold back.

You do not have to be religious to appreciate something transcendent in Adams’s music, any more than in Bach’s Passions. Indeed, I don’t know that you would really call Adams’s oratorios “religious.” But “transcendent,” I think, is the right word, and transcendence is what music does better than the other arts, because it is so hard to account for. Tributes to film noir and bebop are well and good, but they are of our time and place, and it is the mundane that Adams’s oratorios transcend. The music is often wonderfully lyrical, often dynamic, and frequently strange (the three counter-tenors, in particular, can sound quite disarming). But the music always seems necessary, and part of that necessity is that it can’t be explained away. •

Composer Andrew Ford presents The Music Show at 10 am and 10 pm each Saturday on ABC Radio National. His latest book is Try Whistling This: Writings about Music.