Adding to the ambience

Wallpaper music? There’s more going on than you might think, writes Andrew Ford 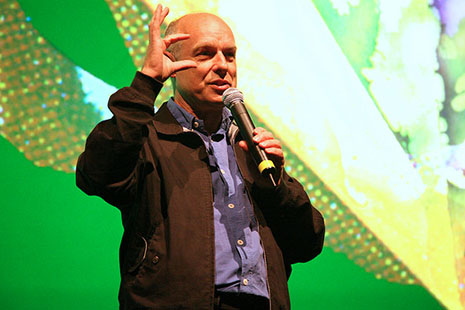 Creeping up on us: the very persuasive Brian Eno. Scott Beale/Flickr

YOU will, I hope, forgive the name-dropping when I tell you that it was Brian Eno who finally convinced me that there was a point to ambient music, and that it could, in fact, inspire the keenest listening. Until I interviewed him on The Music Show a few years ago, I had always been dismissive of the genre: music that was not for active listening was like visual art that was not meant to be looked at, or that’s how it seemed to me.

“Wallpaper music” is the slur most frequently levelled at ambient music by its detractors, and I dare say I have levelled it myself. But it’s not necessarily a derogatory term. Because the thing about wallpaper is that while we might not notice it much of the time, or even most of the time, occasionally and without warning it will creep up on us, and before we know it we are examining it closely. Perhaps we are staring into the middle distance and suddenly we focus on the familiar pattern. Perhaps we then begin searching for the joins; perhaps we marvel at how carefully the rolls of paper have been matched; perhaps they haven’t been matched, and we notice that. In any case, the wallpaper now has our full attention. (Please don’t tell me I’m the only one who does this.) Eno explained to me that this was how he always wanted his music to work.

Brian Eno effectively invented ambient music, and in one of his most famous works, his target audience was an airport full of busy travellers with bags to check in, places to go and people to meet or farewell. Listening to music is not high on their list of things to do, but there it is anyway, playing quietly in the background, adding to the ambience of the place, and – this is the important bit – some of those travellers will, in their own time and perhaps just for a few minutes, suddenly become aware of it. They will listen perhaps casually, perhaps with an intensity born of the very oddness of hearing this music in an airport.

The truth of the matter is that the opposite can happen in a concert. You might have gone along to hear this band or that singer, but it’s a relatively common experience to tune out, to become distracted, and to miss a few songs or half a movement of a symphony. Eno’s Music for Airports – like ambient music in general – acknowledges the ways in which we listen and the distractions that prevent us from listening, though in the case of this particular piece it is the music itself that arguably forms the distraction.

The title of Stephen Whittington’s new string quartet, Music for Airport Furniture, is a double homage to Eno and to Erik Satie, who in 1917 composed the first of the pieces he called Musique d’ameublement (Furniture Music). In fact, it was more a Dadaist pose than truly ambient music: when spectators at an art gallery fell quiet so as to listen, Satie implored them to keep talking. Whittington’s piece isn’t necessarily ambient either, though I suppose it depends where and when you play it. Its slow tempo and repetitious nature lends itself to ambience, but the Zephyr Quartet’s performance certainly held my attention.

What is interesting is how one begins to hear things in the music as it repeats. A particular sequence of chords gradually begins to seem darkly suspenseful – it helps that one or two of them might have come from the pen of Bernard Herrmann; a descending phrase comes to resemble the main theme from the slow movement of Beethoven’s first “Razumovsky” quartet. Perhaps this is deliberate; perhaps my mind is playing tricks. But, crucially, when the music stopped after a mere twenty-two minutes, I very much wished it would continue. I suspect that may be a clue to its ambient nature. The piece didn’t seem over; no argument had been clinched because none had ever been advanced. It was just that the sounds had ceased to exist and now it felt as though something was missing. With a non-ambient piece – for example, the aforementioned Beethoven quartet – you don’t regret its passing, because the music had made its point. But when there’s no point being made, and the music might easily go for another hour, the arbitrariness of its stopping seems almost violent.

This is still more the case with the Necks’ new album, Open, which does indeed go for another hour before coming to a most perfunctory end. The label “ambient” is often applied to the Necks, though they rightly resist it, as indeed they resist “jazz” and “minimalist” and any other labels that come their way. But “ambient” suits Open rather well. Some of the Necks’ music contains quite dynamic passages, with strong, driving rhythms; Open is more gentle, even decorative in feel. And while the Necks’ live performances are completely improvised, this CD seems to contain a few overdubs, enriching the textures, some of which are rather lush.

Meanwhile, drummer and percussionist David Jones, who is happy enough with both “jazz” and “ambient” as descriptors, intends his new recordings as mind-altering music. At least, he hopes to “open up pathways to inner peace.” This is not at all the same as Eno’s idea of ambience, because the music, although gentle and mostly slow, has a purpose, and to fulfil it, it demands to be listened to – at least at first. But the tracks on Meditations on Peace and Soundtrack for the Mind are sometimes rather intricate, and always beguiling in their exploration of timbre. Moreover, “Biosphere,” the final track on Soundtrack for the Mind, has an epic, journeying quality that carries you along with it. Play these CDs in airports and you may find people missing their flights, for the longer you listen, the more interesting Jones’s music becomes.

Perhaps, in the end, ambience is in the ear of the beholder. •