The microphone gave a new authenticity to pop vocals, writes Andrew Ford. Can it do the same for classical musicians? 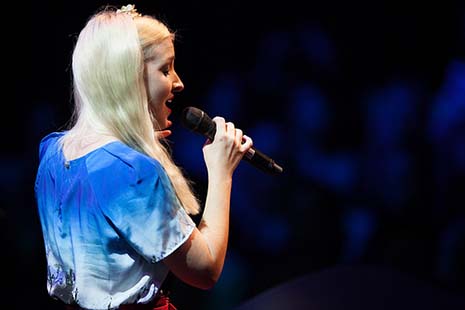 MY FAVOURITE moment in one of my favourite pop songs of recent years, “The Last Day on Earth,” comes just before Kate Miller-Heidke starts singing.

There is much to admire in the song itself, from the basic conceit (“It’s the end of the world / And you’ve come back to me / In my dreams”) to the wistful tune, to the faux-fey delivery of apocalyptic lines such as “The ground below is crumbling /… / The stars are all exploding,” to the little flecks of chorus superimposed on the middle-eight that turns into an endlessly repeating secondary chorus. All wonderful stuff. But still my favourite bit is Miller-Heidke’s short, sharp intake of breath at the start of the song, completely in tempo and suggestive of wide-eyed surprise. Like the ultra-sweet voice that sings the song itself, the breath is a reminder that the most important instrument in pop music is the microphone, in this case placed quite close to the singer.

Obviously pop music hasn’t always had the microphone. Before it did, popular singers, like classical singers, had to make themselves heard above the band. But because these singers generally lacked classical techniques – which in any case would mostly have sounded wrong – they were forced to belt out their material. Al Jolson is a good example of this somewhat raucous style. Another is Ethel Merman, who persevered with the technique long after microphones became available.

What the microphone made possible in pop music was a complete range of vocal manners, from the most hectoring to the most intimate. It was the intimacy that was new – and quickly disapproved of by many a moral guardian – and it went hand in glove with a drop in vocal range. Without amplification, the most effective voices – the ones that carried best over a band – were the soprano and the tenor, but now that singers had no need to project, alto and baritone voices became fashionable. Bing Crosby, Frank Sinatra and Perry Como are just three of the more famous baritone crooners, and in the first volume of his Crosby biography, A Pocketful of Dreams, Gary Giddins points out that after Rudy Vallée there would be no big-name tenor in pop music until Elvis Presley came along.

Presley, of course, sang a very different sort of music, and in at least one case he and his producers used the microphone differently. The rather cavernous sound of “Heartbreak Hotel,” which nowadays would be achieved with the flick of a switch, was created in 1956 by having Elvis back away from the microphone, retreat to the far end of the studio and project. A touch of Ethel Merman, in fact.

Among classical musicians, the microphone is still viewed with suspicion. There are those who think it’s cheating, others who insist it destroys their sound. The idea of cheating is obviously silly – you might as well say that recording is cheating – but amplification can certainly change a performer’s sound.

It all depends what you’re trying to do, though. If you are hoping to integrate normal speech with an orchestra – for example in a piece with a narrator – then the voice must be amplified. It is only a small step to amplifying the singing voice. I recall once hearing the soprano Cathy Berberian use a microphone when singing Ravel with an orchestra in London’s Festival Hall. She could have reached the back row with her unamplified voice, but chose instead to employ a more intimate tone, which she rightly considered appropriate for that composer’s Two Hebrew Songs.

The principal use of amplification in our concert halls is to overcome poor acoustics. In the Sydney Opera House, Opera Australia regularly “enhances” its sound in the opera theatre, and the Australian Chamber Orchestra has been known to do the same in the concert hall next door. Audiences tend not to notice the subtle improvement. On the contrary, they are more likely to notice when it isn’t there and the acoustic is correspondingly thin and dry.

The Kronos Quartet now plays every concert with amplification. As with Kate Miller-Heidke and Bing Crosby, it comes down to conveying intimacy. Increasingly, the Kronos’s repertoire is written with amplification in mind, but I have also heard them play Berg and Shostakovich amplified.

More traditionally minded string quartets might consider following suit. They will argue that they want to give their audiences an authentic experience and that authenticity precludes microphones. But there’s nothing authentic about a quartet playing in a 2000-seater hall. String quartets are not built to fill large auditoriums; by definition, chamber music requires a room. Haydn and Mozart, Beethoven and Mendelssohn wrote their quartets to be played in people’s homes – grand homes, admittedly, but still in rooms that were a lot smaller than a modern concert hall. The best way to listen to this music is in a similar room, but who can afford to put on the top chamber musicians in such surroundings?

If amplification can recreate an intimate acoustic in a big concert hall, I’m all for it. Here is your authenticity. The alternative is that you’re not really hearing a string quartet at all. You’re merely seeing it play in the distance. •