Labor promised a more respectful, diverse and family-friendly parliament. Has it delivered? 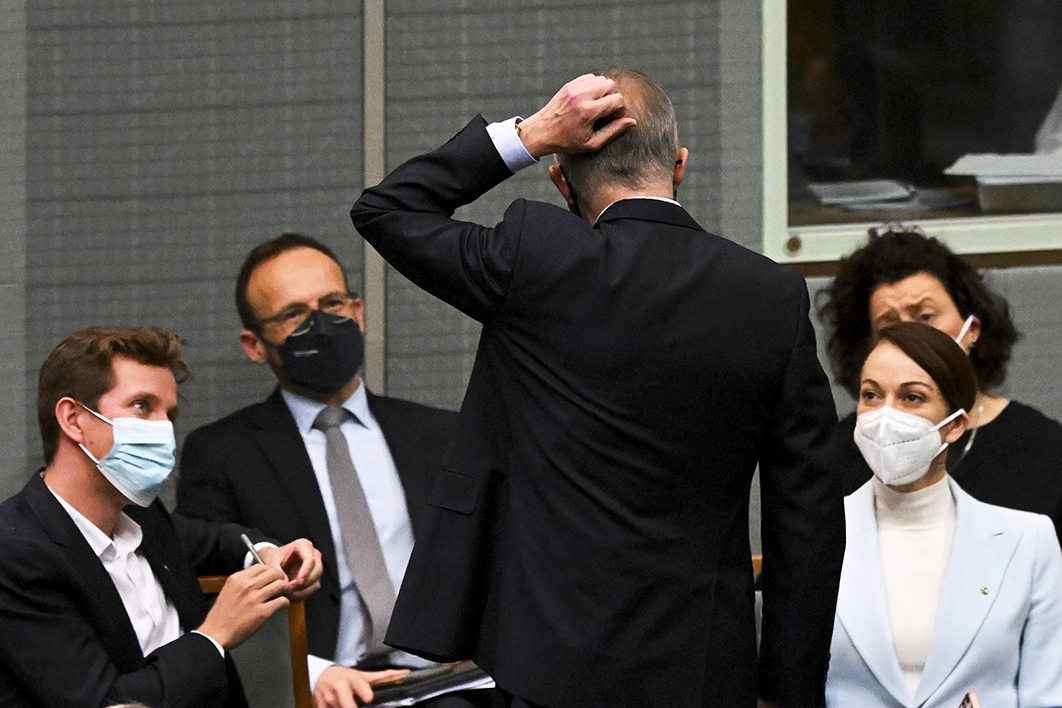 Jacqui Lambie, a Tasmanian independent senator for almost a decade, says parliament is the “best I’ve seen it in a very, very long time.” Even the building’s cleaners seem happier under the new government. As she told the ABC on Tuesday, “it doesn’t feel like I’m walking into the morgue.”

Tasmanian lower house independent Andrew Wilkie, a federal MP since 2010, doesn’t miss the Morrison days either. “The last parliament, particularly towards the end, became increasingly nasty, toxic and hateful and it was not a nice place to come to work,” he tells me. While conceding his politics are closer to Labor’s, he says the parliamentary atmosphere changed “greatly and instantly” post-election.

As Wilkie sees it, Albanese and House leader Tony Burke are noticeably more collegiate. “They are going out of their way to work with the big [sixteen-member] crossbench. I feel there is some sincerity in that. I don’t think it’s just theatre.”

Along with Wilkie, I spoke to independent MPs Helen Haines and Zali Steggall, both of whom also sat in the last parliament. All three described concrete signs of change post-election. “There is a tangible change in the willingness of government to listen, to engage, to be accessible,” says Haines, who holds the Victorian regional seat of Indi.

Crossbenchers have been given roles that have always gone, by convention, to major-party MPs. Wilkie and fellow independent Rebekha Sharkie were surprise appointments to the speaker’s panel, which provides substitute speakers to the lower house. Haines has been made deputy chair of a key parliamentary committee — the Joint Committee on National Anti-Corruption Commission Legislation — which she says is “almost unheard of.”

Crossbenchers now receive weekly government briefings on new bills. They have been given three questions in question time (up from one) and their questions are front-loaded into the session lest proceedings are cut short. And when they asked for more time to debate the federal anti-corruption bill this week, the government agreed (although it voted against Haines’s amendments on Thursday).

The record number of women in the building is also a major sign things are different. Women now make up 38 per cent of the House of Representatives, up from 31 per cent in the last parliament, and 57 per cent of the Senate, up from 53 per cent. “Just by the very simple fact there are more women around — that automatically shifts a bit of the dynamics,” Steggall says. “I feel like women are walking around taller.”

Equality advocates will of course note there is still some way to go. Despite recent gains, parliament is also nowhere near as racially diverse as the rest of Australia. But it is striking how different the lower house looks compared with the last sitting under the Coalition in March. Observing the chamber this week, it was as if someone had been let loose with a packet of crayons. The traditional sea of navy, grey and dark-grey suits was broken up by vivid pinks, purples, oranges and greens.

Greens Senate leader Larissa Waters, first elected in 2010, says that although the Senate already had equal numbers of women there is “no denying” the parliamentary tone has changed. She estimates that a press conference about endometriosis care earlier this month, led by Labor’s Ged Kearney, was attended by almost twenty female parliamentarians from across parliament. “I haven’t stood at a press conference with that many female MPs before,” the Queensland senator says.

Labor MP Peta Murphy has a long-held habit of doing a gender head count when she walks into a meeting. A former barrister and senior political staffer, she is used to being one of only a couple of women in the room. “It is relatively rare now that I go into a meeting or an event [at parliament] where women are significantly outnumbered,” she says.

Another small but significant change is Labor’s ban on divisions (or votes) after 6.30pm. If you aren’t listed to speak in an evening debate you are free to leave the building. Not surprisingly, this has been particularly welcomed by parliamentarians with small children who travel to Canberra. Labor’s Kate Thwaites, a second-term Victorian MP, says she “barely” saw her children under the old system. Now, she can be home in time for bed.

But if you thought parliament was now one big, happy democratic family, you only need watch question time. Numerous calls have been made (including by Murphy and Thwaites) for a ban on Dorothy Dixers. But on Wednesday this week Labor chewed up about half of question time asking itself tedious questions like, “Why are Labor’s early childhood education reforms important to the economy?.”

Meanwhile, both sides yelled and cackled in the same ridiculous pantomime. Those that weren’t doing this looked at their phones and tablets, utterly disengaged. A key focus for outrage was whether Liberal Jenny Ware was sitting in the right seat (she wasn’t) and whether she had phrased her questions about the industrial relations bill correctly (she hadn’t). Dutton called Labor’s points of order “petty” and “cute.” Labor MPs heckled back “brainiac” and “genius.” “I was embarrassed by it,” Wilkie said afterwards.

Liberals are unsurprisingly less upbeat about how politics is operating. They say parliamentary culture had begun to improve before the election. Kate Jenkins’s review of parliamentary workplaces last November meant offices already had more HR support. They are now grappling with the slog of opposition and doing their jobs with (as one staffer described it), “no staff.”

Other grievances and disappointments bubble away. The good vibes with the crossbench were tested by Albanese’s decision to cut their staffing levels before parliament resumed. The government says that crossbenchers would otherwise have more staff than senior opposition MPs. Crossbenchers say it makes it harder to get through their enormous workloads.

Over in the Senate, Waters says the process of consultation between Labor and the Greens — who hold the balance of power — is “not yet as smooth as hopefully it will be.” “I think the lower house ministers are still learning that the Senate is needed to pass legislation,” she adds.

With one more scheduled sitting week for 2022, some politics is being done differently but a lot is the same old. And if it has changed, perhaps we shouldn’t be too starry-eyed about it. Don’t forget, back in May, about a third of voters rejected the major parties. Some political observers think majority government in Canberra is on its way out.

Says Wilkie: “I’m not naive. This place is still a bunch of politicians going about politics. There are some political benefits for the government in looking collegiate and calm and businesslike.” •

Judith Ireland is an editor with the Conversation and a member of the federal parliamentary press gallery.