The Panama Papers have thwacked Britain’s prime minister. But he’s not out yet, says David Hayes in London 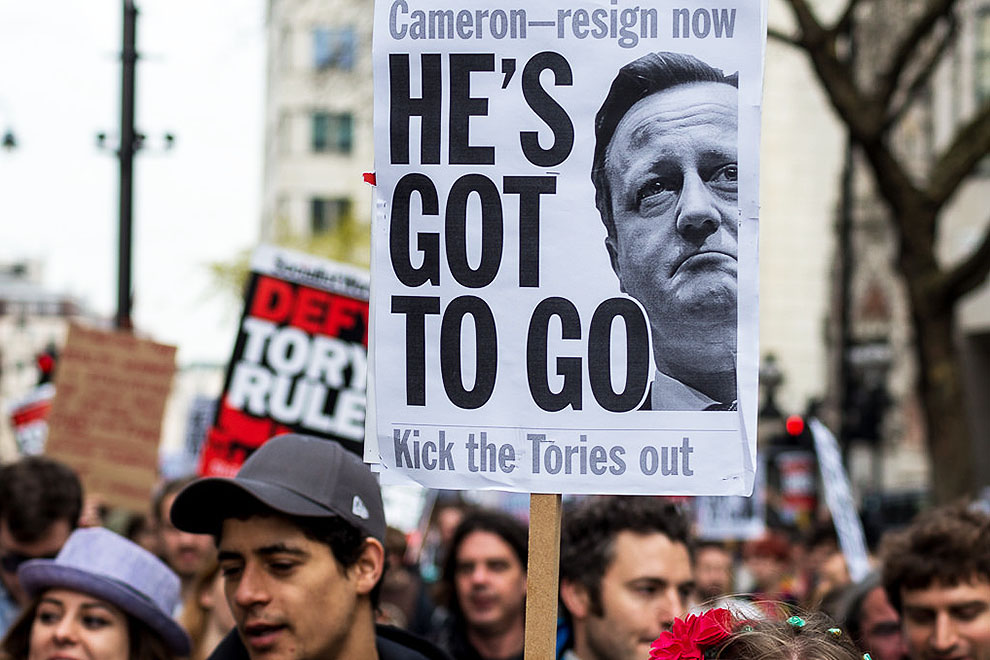 A personal form of loathing: protesters calling for David Cameron’s resignation in London over the weekend. The Weekly Bull/Flickr

David Cameron is in many ways the dream candidate to be snared in a financial imbroglio. As a child of privilege, inheritor of wealth and beneficiary of an elite education and an insiderish career path, Britain’s prime minister personifies what millions of British people most resent about their society: not just the facts of inequality and unfairness, but also the way they are perpetuated across the generations, with life chances shaped by the lottery of birth and those outside the charmed circle destined to “suffer as they must.”

This context, and the class perceptions woven into it, explains much of the savage glee at Cameron’s bumbling reaction to the local fallout from the Panama Papers leak. Among the 11.5 million documents extracted by a whistleblower from the files of the tax-haven law company Mossack Fonseca are those concerning a high-end investment fund, Blairmore Holdings, established in Panama in 1981 by Ian Cameron, who died in September 2010, four months after his son David entered 10 Downing Street.

Asked about his own financial affairs as the story broke on 4 April, and questioned again in subsequent days, the prime minister delivered his usual masterclass in smooth reassurance, though this time mixed with a fatal hint of evasiveness over detail. In particular, repeated statements couched in the present tense – “I have no shares, no offshore trusts, no offshore funds, nothing like that. And so that, I think, is a very clear description” – served only to entice the listening pack. It took until 7 April for Cameron to acknowledge that he and his wife Samantha had bought shares in Blairmore worth £12,500 (A$23,000) in April 1997, selling them for £31,500 (A$59,000) in January 2010.

More details followed, each reported with an ominous thud. (A thesis could be written on the contrast between the sadistic cast of the English press and the legalistic one of the American, a thought raised by turning to the New York Times during any British paroxysm in order to discover what is actually going on.) Blairmore had been set up in 1981 after Margaret Thatcher’s government lifted currency exchange controls. Its Panama domicile enabled its clients to avoid London’s corporation tax, though Britain-based investors would pay tax on capital gains. It operated with “bearer” shares, which anonymised ownership and were thus conducive to tax evasion. Cameron had also inherited £300,000 (A$560,000) from his father, the exact provenance of which (from offshore sources or not?) is as yet unclear.

By this stage, three days in, the new mediacracy – a potent, mutually reinforcing composite of breathless headlines and phone-ins, twitter feeds and talk shows, print stridency and online urgency, all released by the thorough, collaborative journalism of the participating outlets– was in full, and in many cases murderous, swing. In apposite 1789 terms, the tumbril was by now near the guillotine, to joyous acclaim from the boulevards. We’ve got posh-boy Cameron at last! Guilty from his own silver-spooned mouth! Off with his smarmy head! Panamagate (Scotland’s Herald actually used this term) would achieve what, so far, two general elections and two referendums had failed to do: knock the lord of presumption into amply deserved ignominy. Aux armes, tricotons! De cliquer jamais ne cesserons! Never stop clicking!

Cameron’s gilded background and polished mien has always attracted a distinctly personal form of loathing (most often, in a country of fifty-seven varieties of class coding, of the faux-proletarian kind.) Singer-songwriter Paul Weller berated him in 2008 for having fond memories of The Jam’s song “Eton Rifles,” guitarist-songwriter Johnny Marr “forbade” him in 2010 from liking The Smiths. This time, serendipitous return fire came from a newly ubiquitous 1969 song whose co-performer had just died: “Lock up the streets and houses / Because there’s something in the air / We’ve got to get together sooner or later / Because the revolution’s here, and you know it’s right.”

Labour joined the cacophony, with prominent figures calling variously for Cameron’s resignation and imprisonment. The party’s deputy leader Tom Watson – a candidate for the unlikeliest source of moral rectitude in British political history – hauled his necks of bull and brass around the TV studios. The Scottish National Party, on course for another election win in May despite burgeoning scandals, and the Liberals and Greens, glad of the publicity, added their scorn. Cameron’s own Conservatives, meanwhile, now thrilling to the chaos of civil war as the referendum on European Union membership on 23 June approaches, are barely able to muster even nominal support for their leader. A year after delivering a stunning, if narrow, election victory, the prime minister is beleaguered.

Yet by Saturday, at the end of the “worst week of his career” (the latest of many), he was as ever on parade, and in rueful mode at the Conservative Party’s spring forum: “I should have handled this better... I will learn the lessons.” It was no more than a holding moment, and many were unforgiving. His performance in the House of Commons on 11 April will in turn be the latest of many efforts to regain the political initiative.

Beyond his personal affairs Cameron has spoken often about the importance of tackling tax evasion. He made this the core theme of the G8 summit in Northern Ireland in 2013 (which in the event was diverted by Syria), and foregrounded the issue in Davos, Singapore and Jamaica. In 2014 he pressed the United Kingdom’s worldwide assortment of overseas dependencies and crown territories to compile transparent public registers of companies domiciled there, though with limited results. He will also host a long-planned summit on global anti-corruption in London on 12 May. The domestic tax authorities claim to have brought in more than £2 billion from offshore tax evaders since 2009–10, and £1.5 billion in additional tax revenue from Britain’s wealthiest people.

Seven days on from the Panama leak, however, the drama’s domestic momentum was behind Cameron’s own finances rather than corruption and concealment among the global mega-rich (what Gabriel Zucman calls “the hidden wealth of nations.”) This was confirmed later on 9 April when he revealed his last five years’ tax details, redeeming a pledge first mooted in 2012. The Sunday papers were on the case in an instant, several headlining the information that Cameron’s mother gave him two separate payments of £100,000 ($187,000) in 2011, potentially avoiding an inheritance tax bill of around 40 per cent of that sum. (The Mirror’s description, “tax dodge bombshell,” is typical.) The now proliferating story is outrunning even this most dexterous of prime ministers.

Nothing illegal in Cameron’s actions, nor those of family members, has so far been found or even seriously hinted at. In the absence of a killer fact, the press’s hyberbole fatigue and the public’s boredom may spare him real damage – at least until the EU vote, when a majority for “Brexit” would make his resignation inevitable.

But that’s not the end of the matter. In Britain (the contrast with the United States again comes to mind), public reputations are made and broken by culture and atmosphere as much as by law. Alertness to intangible shifts in the social and moral climate is thus a prized currency. At present the shift seems to be away from those with expansive portfolios and ample homes towards those with meagre payslips and pinched horizons. Cameron's trauma may signal that wealth far beyond the reach of most citizens – especially if it is held “offshore” – can become a liability to a public career.

Cameron is at least temporarily wounded, having lost a couple of points in the polls (echoing the impact of Malcolm Turnbull’s state income tax suggestion, as analysed by Peter Brent in Inside Story). His political mistake, an aeon ago as it already seems, was not instantly to report the income he had accrued on his father’s (legal, taxable, declared) fund. Instead he dissembled, perhaps because a protective filial instinct overrode his judgement. Trapped by his initial response, amid an escalating media frenzy, his belated admission was inevitably a bad look. The result has been open season: on his hypocrisy, sleaziness, deceit, untrustworthiness, and unfitness for office. And underlying all the calumny is the matter of class, the sense that Cameron cannot be “one of us” because of his privileged social origins. His almost plaintive last words in the interview confessing his Blairmore dealings – “I have never tried to be anything I am not” – cut no ice.

In this perspective, Cameron’s bit part in the Panama hacktivism has also made him a symbol of an era whose insecurities and fears combine with technology-enabled awareness of rooted inequality, inordinate wealth and systemic corruption. The fact that London itself is a central player in the laundering of illicit global funds, and that some of its Caribbean outposts (the British Virgin Islands, Bermuda and the Cayman Islands) and offshore dominions (Guernsey, Jersey, Isle of Man) are components of the global tax-avoiding archipelago, hands Britain a prime responsibility in bringing tax havens or secrecy jurisdictions (Nicholas Shaxson’s alternative term in his indispensable book Treasure Islands) into the light. After Mossack Fonseca, any British government will now be judged by that standard.

The deafening response to Cameron’s embarrassment in Britain has meant corresponding neglect of the wider information cascade, including the 140 political leaders named in the documents. Associates of Putin and Xi, Assad and Kim, Poroshenko and Macri have been almost invisible in much of the coverage. If seeing events in their true proportion is the beginning of political wisdom, then a degree of rebalancing would be timely.

But already the affair has marked British public life. The leaders of Scotland’s four main parties released their own latest tax returns on 9–10 April, while the Labour leader Jeremy Corbyn has promised to match Cameron’s openness. In classic British fashion – that is, on the hoof – a new and immutable tradition is hereby invented. The chancellor George Osborne, whose family is far richer even than Cameron’s, is next in line for a tax inquisition. After his misfiring March budget, his chances of succeeding Cameron may be further weakened.

More broadly, a new front in the war on tax secrecy has been opened up, one whose big targets are the pillagers and plutocrats who steal the people’s assets. But keeping those same people onside will require statecraft as well as moral fervour. Britain may be tiring of its moneyed elites, but neither is its temper Jacobin. The wrong people in the tumbrils and nothing done would lose this precious opportunity. Getting the law, the transparency, the enforcement and the politics right, hard as these are, is the only way through. •