Close, but not close enough

Lawrence Springborg has a glimpse of the summit, but the polls suggest he won’t get there this time, writes Brian Costar 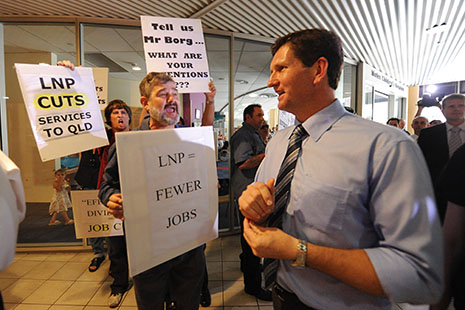 Above: Queensland LNP leader Lawrence Springborg is confronted by protestors during a visit to the Mater Childrens Hospital in Brisbane on Monday.
AAP Image/Dave Hunt

THE LAST THREE opinion polls, each recording a two party preferred vote of 51 per cent for the Liberal National Party and 49 per cent for the Labor Party, suggest that this Saturday’s Queensland election will be much closer than expected. Three scenarios are possible: the return of the eleven-year-old Labor government with a substantially reduced majority; the election of an LNP government; or a hung parliament in which the government will depend on small party and independent members.

The problem for the newly formed LNP is that it is trailing behind it two dead cats: the very bad defeats in 2006 and 2003. To secure the premiership, two-time loser Lawrence Springborg needs a swing of nearly 8 per cent and a gain of twenty-two seats. This is a big mountain to climb and while he is in sight of the summit he is not there yet.

A key determinant of this election is whether voters in Brisbane will accept the LNP as a truly new conservative party or reject it as a thinly disguised National Party – with all the historical baggage that brings with it. Springborg cannot win the election unless he can improve the LNP’s abysmal performance in the capital city, where it holds only one seat out of thirty-eight.

Fifty-one percent of the vote is a swing of 6 per cent on the combined conservative vote in 2006 – impressive, but not enough to take the twenty-two seats needed to form government. A uniform 6 per cent swing would see the ALP lose sixteen seats, producing a parliament of:

But the swing may not be uniform because of the highly regional politics of Queensland, which the opinion polls are not reflecting. Labor could successfully defend some very marginal Brisbane seats and lose regional seats which are beyond the 6 per cent margin, for example. •

Update, Friday 20 March: Another Galaxy poll, another 51–49 two-party preferred split in favour of the LNP. So tomorrow’s result will depend on regional variations and the extent to which Greens voters choose to take up the option of allocating their preferences, and preference Labor.

Brian Costar is professor of Victorian parliamentary democracy in the Institute for Social Research at Swinburne University of Technology.