Crossbench on a roll?

Where do the “Voices” campaigns have their best chances of winning seats at the next federal election? 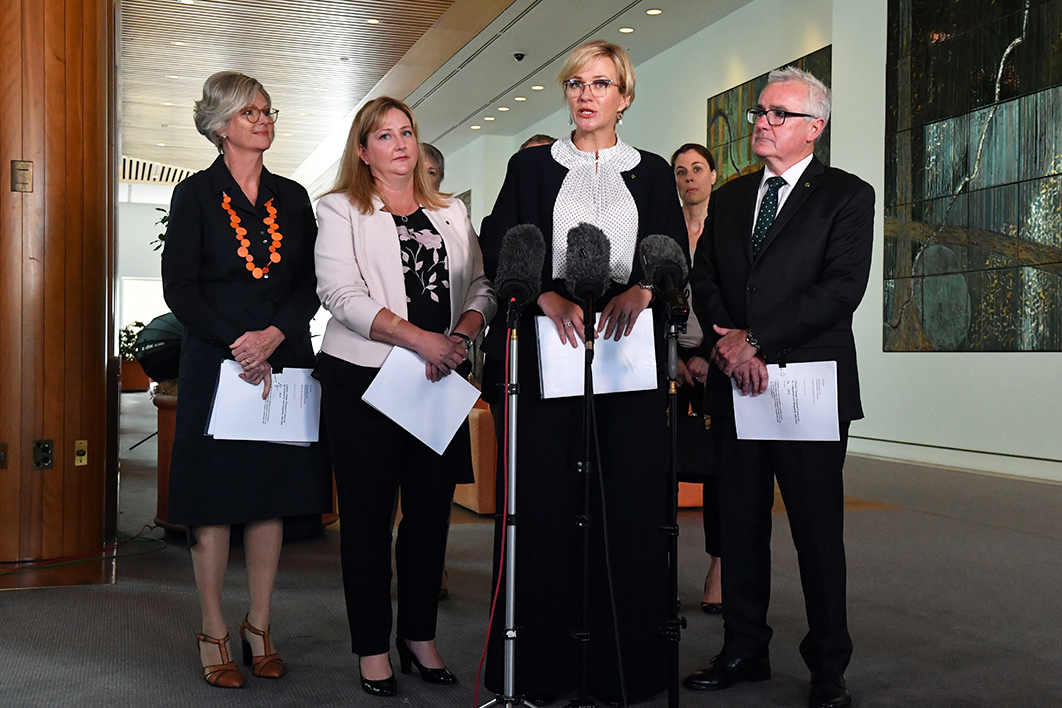 When Australians last cast their ballots for federal parliament, in 2019, the Coalition recorded its second-lowest primary vote since the second world war. Labor’s slump — the lowest vote in more than a century — was even more dramatic.

Of course, it’s the two-party-preferred vote that decides elections in Australia. But the declining major-party primary support increases the chances that minor parties or independents will pick up seats. And so it is that the current parliament boasts a crossbench of six out of 151 MPs, a postwar record.

In the case of Labor-held electorates, the chief threat remains the Greens, although since 2013 the Coalition has alleviated the pressure by routinely preferencing its main opponent ahead of the minor party. This has left the Greens with mostly Coalition-held electorates in their sights, or at least ones that they envisage winning with the help of Labor voters’ preferences.

“Preferencing,” of course, is simply a recommendation on how-to-vote cards. Evidence suggests these can sway a third or more of major-party voters.

For the Coalition, Labor’s preferencing habits take the sting out of the One Nation challenge outside the cities. That leaves a threat from independents in the bush, and a more recent insurgency from urban independents in hitherto-safe Liberal electorates.

Most House of Representatives crossbenchers have tended to arrive one of three ways. They move from the state arena (see Tony Windsor and Rob Oakeshott, and before them Ted Mack). Or, like Bob Katter, they enter parliament as a major-party MP and then spit the dummy. Or they get over the line with the help of a major party’s how-to-vote cards.

Labor how-to-vote cards got Helen Haines elected in Indi in 2019. If Labor had preferenced the Liberal candidate, or run dead (say with a two-sided card), the Liberal would have won. Haines’s predecessor, Cathy McGowan, also relied on Labor cards for her initial win in 2013, but not her 2016 re-election.

Adam Bandt and Andrew Wilkie have Liberal how-to-votes to thank for their initial 2010 victories in Melbourne and Denison respectively, and then used the benefits of incumbency to make sure they no longer needed them. In Bandt’s case that’s just as well; the Liberals haven’t preferenced him since.

Katter (these days leader of the Katter Australia Party) has only needed Labor’s help once since his 2001 departure from the Nationals: in 2013, after he cozied up too much to newly installed Labor leader Kevin Rudd. Election night’s 16 per cent swing to the Nationals gave him the fright of his life; Labor cards very likely saved him.

Those cards also got Kerryn Phelps over the line at the 2018 Wentworth by-election. But Zali Steggall’s 2019 win in Warringah was big enough not to need them. And the victory in Mayo in 2016 of Rebekha Sharkie — a member of the Nick Xenophon Team/Centre Alliance but from her electorate’s point of view an independent — couldn’t have happened if Labor had preferenced Liberal MP Jamie Briggs. (Had they preferenced neither, it could have gone either way.) Sharkie easily survived the 2018 by-election, and again in 2019, needing no help from Labor (though she received it anyway).

On the back of Phelps and Steggall comes the “Voices for” or “Voices of” movement. Actually, they claim they’re not a movement — that they use the word “voice” but there’s no connection. McGowan, formerly of Indi, has told Nine papers that “there is no franchise in place and any group using the ‘Voices for’ tag has chosen to do so quite separately,” but the mere fact that she has knowledge of it suggests… something. The Liberals have asked the Australian Electoral Commission to investigate.

Former high-profile Liberal “wet” Ian McPhee, best-known in the 1970s and 1980s, has endorsed Voices for Goldstein (his old electorate). Malcolm Turnbull is a fan.

What kind of electorate are “Voices” after? Safe (against Labor) high-income Liberal ones that find their party too (socially) conservative, particularly on climate change, but baulk at opting for the party of unions. Labor support needs to be low, because the independent wants to beat it into the two-candidate-preferred count. And the other crucial ingredient, so far anyway, has been an unpopular sitting member.

Sophie Mirabella was in her electorate Indi’s bad books in 2013, assisted by a ferocious campaign by a local newspaper. Briggs had been dropped from the ministry in late 2015 after allegations of creepy misbehaviour.

Wentworth 2018 was an empty electorate, a by-election, whose residents had witnessed their representative dragged out of the prime ministership by his own colleagues. Highlights of the campaign included a government Senate vote in favour of a white nationalist slogan and the Alan Jones horse-races-on-the-Opera-House-sails fiasco, which saw both prime minister Scott Morrison and the man destined to be Labor leader, Anthony Albanese, instinctively side with the far-right radio announcer. And Kerryn Phelps was a local with a national profile.

Tony Abbott was on the nose in Warringah in 2019 (he had been in 2016 as well), thanks mostly to his destructive behaviour after losing the prime ministership and his increasingly strident utterances on climate change.

Going into 2022, does any Liberal MP fit that bill? One that comes to mind is Christian Porter, assuming he runs again in Pearce. A Voices of Pearce is up and running, though the seat is not quite in the leafy blue-ribbon category.

Can previous election data point us towards vulnerable MPs? In Abbott’s case, yes: 2016 saw a big 9 per cent drop in his primary vote, double-digit support for independent candidate James Mathison, and the Greens elevated to the two-candidate-preferred count.

In Mirabella’s case, the 2010 data doesn’t particularly add up to writing on the wall. And Indi, of course, is not urban, let alone particularly wealthy.

Ranking the difference between their own and their parties’ performance in the House and the Senate respectively can give an imprecise idea of MPs’ relative personal votes. On that score, the vulnerable Sydney Liberals are Jason Falinski in Mackellar and Trent Zimmerman in North Sydney.

Mackellar was the site of Labor speechwriter Bob Ellis’s 1994 “swing” against Bronwyn Bishop at a by-election (not really a swing; he hadn’t contested before), which was credited with ending her leadership ambitions. Several times in recent weeks Falinski has responded via Twitter to his Coalition colleague Matt Canavan’s climate change cynicism. An independent, Alice Thompson, hit double digits in 2019 (which accounts for Falinski’s low showing on the table linked above).

North Sydney was the home of long-running independent state MP Ted Mack. In 2019, though, former NSW upper house Democrat Arthur Chesterfield-Evans got only a modest 4.4 per cent.

John Alexander’s low placing in Bennelong is partly a reflection of his high-profile Labor opponent, Brian Owler. Next on the list is Julian Leeser in Berowra.

Down in Victoria, Oliver Yates had a red-hot go in Kooyong last time, but was overshadowed by a high-profile Greens candidate. The Greens are perennially hopeful in Higgins, and Voices would be too. Tim Wilson in Goldstein seems torn between the ideologically charged Institute of Public Affairs identity that earned him preselection and his electorate’s decidedly Turnbullesque leanings. The electorate has a Voices page.

Individually, each of the MPs mentioned above is likely to survive, but the chances are good that one or two Voices candidates will pop up somewhere.

And if we’re after an indicator on social progressiveness, maybe we can go no further than the 2017 marriage-equality survey results. Wentworth was fourth out of 150, Warringah tenth and Indi sixty-fifth. Start from the top, zero in on Liberal-held seats, and watch those spaces. •

Did the campaign to punish Melbourne’s daily papers for questioning Dan Andrews’s government hit its mark?

After the initial violence, Melbourne’s protests against mandatory vaccinations and the two-week shutdown of the construction industry were quieter and less focused. James Ross/AAP Image 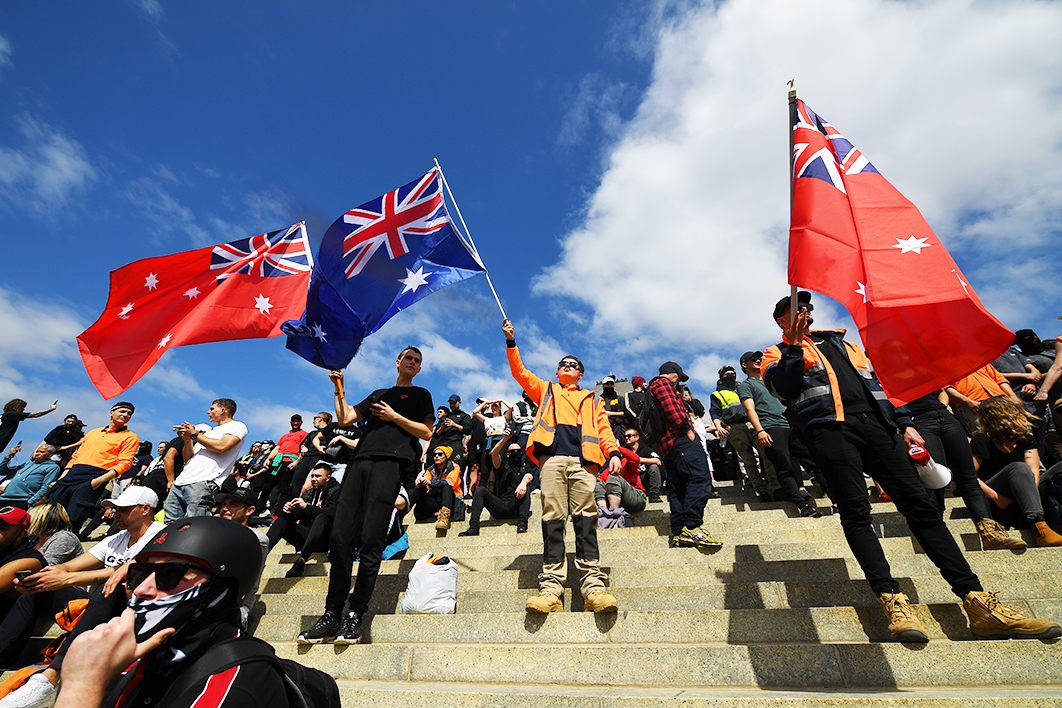 After the initial violence, Melbourne’s protests against mandatory vaccinations and the two-week shutdown of the construction industry were quieter and less focused. James Ross/AAP Image