Like most by-elections, the weekend’s vote in Groom hasn’t changed the wider electoral equation 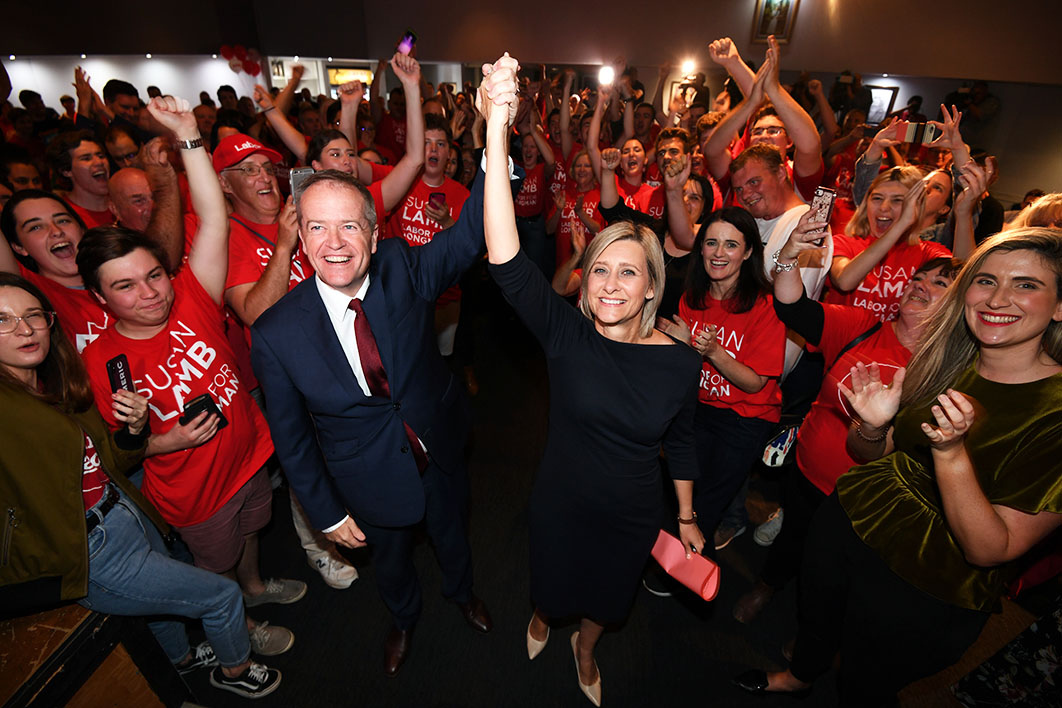 You must remember this: the swing to Labor’s Susan Lamb in the July 2018 Longman by-election helped cement Bill Shorten’s position as opposition leader and intensified leadership speculation within the Liberal Party. Dan Peled/AAP Image

At last count, Saturday’s federal by-election in the Queensland electorate of Groom saw a 3.8 per cent two-party-preferred swing to the Labor opposition. (As postal votes continue to be added, this will shrink a little.)

Is 3.8 per cent a lot? In July 2018 a 3.7 per cent swing to Labor in another Queensland seat, Longman, produced a flurry of excitement in the media, with scribes overlaying the figure onto the pendulum to produce horror stories for the government. The Liberal party room took note, and that contributed to prime minister Malcolm Turnbull’s demise the following month.

Why are we not witnessing similar hysteria today?

Longman dramatists would argue that it was a reasonably marginal electorate, while Groom isn’t, and that the big drop in the Liberal National Party’s primary vote (which mostly went to One Nation) made it a big story. Perhaps, but the swing to Labor after preferences, which is all that really matters, was only 3.7 cent. Most of that One Nation vote (some 68 per cent) ended up in the LNP’s two-party-preferred vote.

Some of the Longman histrionics came from Turnbull’s Liberal enemies manipulating journalists. As well, there was an election due within a year, the government was trailing in opinion polls, and the by-election result slotted in nicely. Note that the previous December the NSW seat of Bennelong had seen a bigger swing, 4.8 per cent, to Labor, but the popular take-out from that was all about Liberal John Alexander’s safely retaining it. Still, putting 4.8 per cent onto the pendulum would’ve been even more fun.

In New England (New South Wales) a couple of months earlier, Barnaby Joyce had picked up a 7.2 per cent swing. Woah. But no one applied that to the other side of the pendulum, or declared the government headed for a landslide re-election.

Longman just worked in a narrative sense. A government, headed for defeat, suffers swing at by-election, reinforcing what we already knew. Yes, it meant ignoring Braddon (Tasmania), held on the same day, which produced a tiny swing to Labor of 0.1 per cent. Hey, Queensland is more important at election time than the Apple Isle.

You ever get the feeling so much election commentary is a bit silly?

I’ve said it before and I’ll say it again: by-elections are grotesquely over-interpreted in this country. And in the mother country; in fact, that’s where we get it from.

What can we say about Groom? The Greens didn’t run, and that’s a first at a by-election going right back to when Tony Abbott won Warringah in 1994. (We’ve had thirty by-elections since then.) Why they made that decision isn’t obvious; they would presumably have received more than 4 per cent and qualified for public funding. (They got 8 per cent at the last general election.)

In fact, Groom was contested by only four candidates, which is very low by contemporary standards (though in the early days of Federation it would have been high). The last time a by-election field was that small was in Wentworth in 1995, when former Liberal leader John Hewson left politics.

The Liberal Democrats candidate came last, which was kind of predictable if we remember (as we should from time to time) that 90-odd per cent of Australians aren’t as interested in politics as we are. Hardly anyone outside the political bubble would have more than vaguely heard of that minor party, and the other one in the contest, Sustainable Australia, while enjoying even less exposure, at least has a name that can appeal viscerally. Greens weren’t running, remember.

Like Bullet Train for Australia (2013–17), the name is worth a per cent or two. Sustainable Australia, for those who dig a bit deeper, is somewhat anti-immigration, which is perhaps icing on the cake. It’s a bit like Family First used to be (although appealing to very different types of voters); you didn’t have to be religious to find the name appealing. In 2017 Family First merged with Cory Bernardi’s Australian Conservatives, and for some stupid reason dropped their own name in favour of his.

Australian Conservatives was a name from hell. And Liberal Democrats is just bland, but at least has the potential advantage of being easily confused with the Liberal Party. As David Leyonhjelm discovered in 2014. •