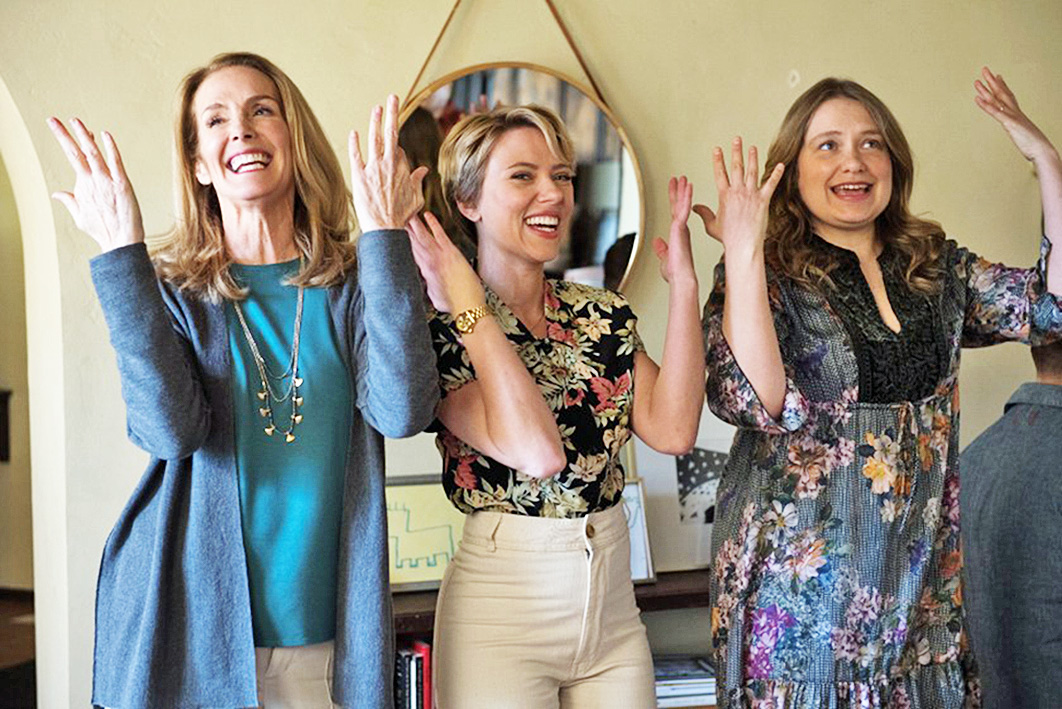 Giving it up: Scarlett Johansson (centre) performing “You Could Drive a Person Crazy” with Julie Hagerty (left) and Merritt Wever. Netflix

In the closing minutes of Noah Baumbach’s film Marriage Story, the main protagonists — antagonists? — each break into song. Nicole (Scarlett Johansson) sings “You Could Drive a Person Crazy” and in the following scene her estranged husband Charlie (Adam Driver) sings “Being Alive.” Both songs are by Stephen Sondheim. It’s a striking turn of events for several reasons, not least because the movie isn’t a musical.

Robert Altman’s Short Cuts (1993), also not a musical, contained several songs. That film was constructed from the interweaving of short stories by Raymond Carver, but with the addition of a single character, unique to the film. Tess Trainer is a nightclub singer, her career all but washed up. She’s played by the jazz singer Annie Ross and the film affords her set pieces in which she sings songs by Doc Pomus and Mac Rebennack (Dr John) and a specially written song, “Conversation on a Barstool,” by Bono and the Edge.

Ross’s function in the film is that of Greek chorus, and she sings because her character is a singer. But more commonly when movie characters break into song it is to reveal or underline something about themselves. In Broadcast News (James L. Brooks, 1987), Albert Brooks’s character Aaron, a news reporter snubbed by his network in favour of the dim but rugged-looking William Hurt, mixes himself a drink and rattles off some of the French lyrics to Francis Cabrel’s “L’Édition spéciale” to confirm to himself his superiority.

In The Savages (Tamara Jenkins, 2007), Philip Seymour Hoffman, playing a Brecht scholar with a failing love life, distant sister and father with dementia, listens in his car to Lotte Lenya singing Brecht and Weill’s “Salomon-Song” from The Threepenny Opera. It’s a song about disappointment and at first Hoffman hums along, before joining in the chorus (“How great and wise was Solomon”), in which Brecht points out that wisdom only gets you so far in life.

In Lost in Translation (Sofia Coppola, 2003), Bill Murray’s character gets up in a Tokyo karaoke bar to sing Nick Lowe’s “(What’s So Funny ’Bout) Peace, Love and Understanding,” the song underscoring his fish-out-of-water status in a group of much younger and mostly Japanese people who, nevertheless, cheer him on.

All these films find reasons in the plot for their characters to sing, but in Magnolia (1999), the director Paul Thomas Anderson creates magic by having his actors sing with no pretext at all. Again, the film is not a musical, but the director was apparently inspired by Aimee Mann’s songs, and several of these feature in the film, along with songs by others (including Harry Nilsson’s “One,” sung by Mann). Mann’s “Wise Up” is the song that creates the aforementioned magic, as the film’s characters take up the song, one by one, each in his or her own situation — snorting cocaine, say, or nursing a dying man. It’s the sonic equivalent of the moment in The Wizard of Oz when the film changes from black and white to bright primary colours. Not only are we “not in Kansas anymore,” we’re in a different sort of movie.

Something similar happens in Marriage Story. Baumbach provides his characters with reasons to sing — Johansson’s Nicole (an actor) is at a party, Driver’s Charlie (a theatre director), recalling Lost in Translation, is singing karaoke — but the nature and provenance of the songs are what is significant here. They are not only both by Sondheim, but both are from his 1970 musical Company. Moreover, they are sung in Company by characters in situations similar to those in which Johansson and Driver’s characters find themselves.

In Company, Robert — Bobby — is a typical young man of the late 1960s, a mixture of self-pity and self-justification when it comes to relationships with women. He thinks he’d like to commit, but until the right woman comes along feels obliged to play the field. Three of his exes confront him with “You Could Drive a Person Crazy.” In Marriage Story, the song, performed at a Hollywood party to celebrate Nicole’s divorce from Charlie, remains a trio — Johansson’s Nicole is joined in her performance by her mother (Julie Hagerty) and sister (Merritt Wever). It’s so much in the style of the original that you imagine Johansson studying Donna McKechnie’s version. In the film, the performance ends — as it does in Company — with the tagline: “Bobby is my hobby and I’m giving it up.”

From Nicole’s high spirits, we jump to a New York bar, where Driver’s Charlie is surrounded by sympathetic friends. When Robert sings “Being Alive” in Sondheim’s musical, his performance is punctuated by a running commentary from his own friends. Baumbach might have had Driver similarly interrupted, but it would have been a step into archness (some will feel the whole Sondheim trope is that, in any case). Instead, Charlie’s karaoke performance includes his own interruptions, as he gives himself Robert’s advice: “Is that all you think there is to it?”; “Don’t stop now! Keep going!” Driver not only sounds like Dean Jones, the original Robert, but seems also to have studied the voices of Robert’s friends from the soundtrack album. The whole scene is theatrically alienating and at the same time emotionally wrenching.

Marriage Story has received plenty of critical plaudits — rightly so, in my view — but the full effect of the musical scenes can surely only be felt by someone who knows Company and the original context of the songs. If you do, you will also feel the characters in Baumbach’s film slide suddenly, if not completely, into the characters from Sondheim’s show, then back again. I can’t think of another film that has a similar moment. •

As the implications of the ACCC’s recommendations on digital platforms continue to unfold, the political challenges aren’t getting any easier