Andrew Ford forges a relationship with his new piano 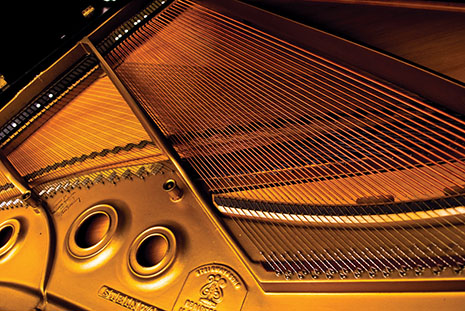 A FEW years ago I witnessed a curious incident at a concert in Helsinki, during a program of music by Harrison Birtwistle. The composer himself was in the audience, and the second half of the concert consisted of a performance of Secret Theatre, which is something of a late-twentieth-century classic. Beginning with a simple flute melody, this piece swiftly escalates into a virtuoso workout for fourteen instruments in which the players negotiate a complex labyrinth of multiple pulses, clacking and banging away in different metres and tempos for the best part of half an hour. On a recording, it is exhilarating; in the flesh, it is physically draining.

At the end of the piece, instruments drop out and the musical structure judders unsteadily to a halt, leaving only the double bass playing a long low C – its bottom note. Coming after all that hectic activity, the piece seems to expire as the bass fades slowly from earshot, like the dying breath of a big, proud beast. That night in Helsinki, the ensuing silence was broken by the sound of the audience exhaling, and then moments later an outbreak of appreciative applause, bringing the composer shambling to the stage.

Then came the curious bit. When Birtwistle walked on to take his bow, he paused as he reached the double bass and gave the instrument – not the player, but the instrument itself – a wry smile and a kindly pat, as though to comfort it.

Musical instruments often seem to be alive, and many of them have strikingly individual personalities. Plenty of musicians even give their instruments names.

My household recently took delivery of a magnificent instrument with an undoubted personality. It is a Steinway Style 1 – these days known as a Model A – that belonged to my late colleague Peter Tahourdin. His daughter, Sarah, who is a neighbour, couldn’t fit it in her house and so has lent it to us while she looks after our Japanese upright.

Now the Kawai is a perfectly serviceable instrument, particularly given my needs as a composer. You see, I can’t claim actually to play the piano, though my parents paid for years of tuition when I was a boy. But I do use the piano in my work, trying out combinations of notes, plugging away at chords, leaning in close to listen, pondering if it might all sound better with that middle note taken down two octaves. The Steinway, with its far richer tone, will perform even this fairly basic function considerably more effectively than the upright.

But there is no doubt in my mind that it was made for better things. It was built in New York in 1896, a year before the death of Brahms, and one can well imagine that composer’s late piano music being played on it.

Its first fifty-four years are shrouded in mystery, except that at some point it made its way to England. There, Peter Tahourdin’s mother sold her diamond earrings to buy the instrument for her son, a music student at Trinity College in London. It was housed in his student digs until he married, then, when Tahourdin and his wife and young daughters came to Australia in 1964, the Steinway came too. In Adelaide one hot summer’s night the Tahourdins were woken by what sounded like a pistol shot. The South Australian climate had proved too much for the seventy-year-old instrument’s rosewood-veneered poplar lid, which had dried out and then loudly split in two.

Even though the piano has just been beautifully restored, the split in the lid can still be made out if you look closely. It is as much a part of the instrument’s story – part of its personality – as the rich tone, fluent action and almost unavoidable legato, the art nouveau music stand, and the maker’s mark advertising the fact that it was built by “Piano m’f’rs to His Majesty the King of Prussia and Emperor of Germany, HM the Queen of Spain, HM the Queen of England, HRH the Prince of Wales…”

Sarah Tahourdin says she is happy that the piano is being used by another composer, particularly one who knew her father, which is kind of her and naturally I am very grateful. But the pianist Ian Munro has just pointed out a stark and simple truth, which, if I am honest, I already knew. He says that I now have a duty to practise. The reason I already knew this is that the piano, just there over my left shoulder, points out precisely the same thing every time I go near her. (Did I just write “her”?) •