Give our regards to Broadway

Urban romance was the hallmark of a great songwriting era 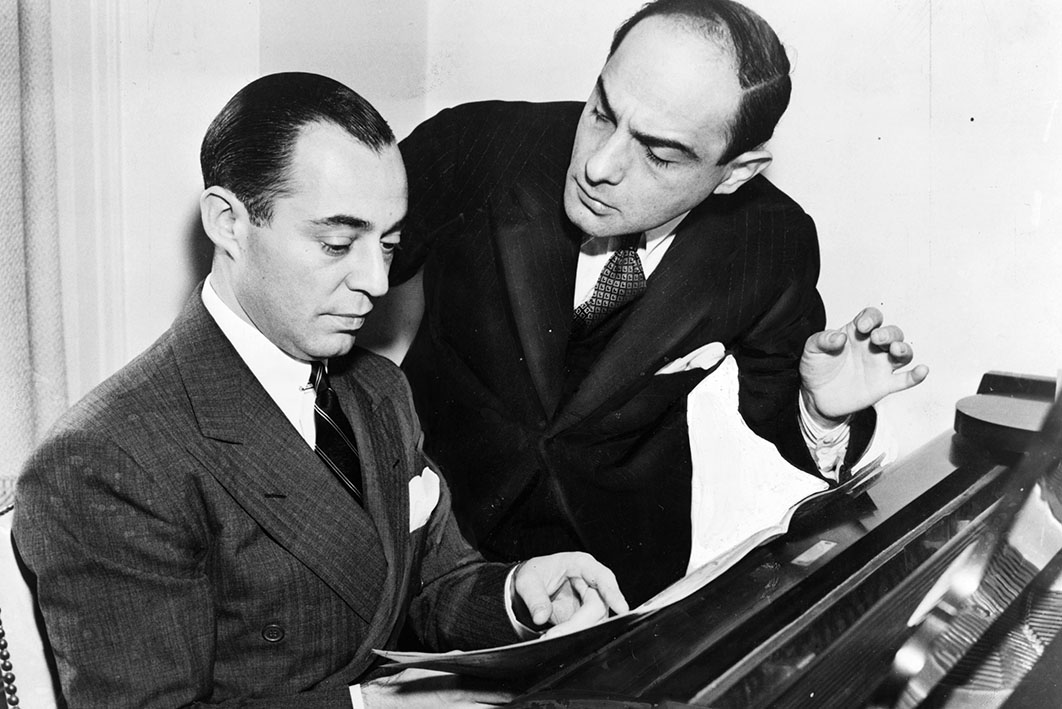 There must be more songs about love than any other subject. Being in love brings out the poet in us, and we can trace the tradition of singing our feelings back to ancient times. To adapt Cole Porter: Greeks did it, Egyptians did it, likewise Chinese and Indians did it.

The Old Testament’s Song of Songs (or Song of Solomon) is a book so devoted to poetic descriptions of love and sex that it doesn’t even mention God. Its poems date from around the tenth century BCE. The troubadours and trouvères of medieval France wrote about little else but love, though it was generally out of reach, and the Romantic poets of the nineteenth century, when not writing about nature, also tended to concentrate on love. In fact they often combined the two, nature providing the backdrop to romance, so that in songs by Schubert and Schumann, to words by Müller, Goethe, Eichendorff and Heine, declarations of love are made to the chirping of birds and rustling of leaves, while hearts break as brooks babble and mill wheels turn.

That changed in the twentieth century. New York City became the home of songwriting and the city itself the setting for most of its output. Love went urban. In the first song of Schumann’s great song cycle of 1840, Dichterliebe, or A Poet’s Love, Heinrich Heine’s words told of the magically wonderful month of May, when love sprang up in the poet’s heart as buds opened and birds sang; eighty-five years later, Heine’s great-grandnephew, Lorenz Hart, together with Richard Rodgers, would “turn Manhattan into an isle of joy” while having “the Bronx and Staten Island, too.”

Perhaps it was simply that the songwriters of the “Great American Songbook” felt at home in New York. The concept of home was important to Jews fleeing oppression in late nineteenth-century Europe, and that accounted for the families not only of Rodgers and Hart, but also of Irving Berlin, Vernon Duke, Harold Arlen, Yip Harburg, George and Ira Gershwin, Jerome Kern, Dorothy Fields and Oscar Hammerstein II.

A few of these were themselves immigrants. Irving Berlin, the composer of “God Bless America,” was born Israel Beilin in tsarist Russia; Vernon Duke (Vladimir Dukelsky) was also born there. But the majority were the children of immigrants. Harold Arlen and Yip Harburg, who together would write “Over the Rainbow” — in the end, perhaps, a more enduring American anthem than Berlin’s — were born Hyman Arluck and Isidore Hochberg. The Gershwin brothers were born Gershwine, the family having already changed its name from Gershovitz. Those not born in New York ended up there anyway, along with a host of other composers and lyricists.

In his new book, City Songs and American Life, 1900–1950, the American broadcaster Michael Lasser documents how the United States changed songwriting and songs changed the United States. Dozens of songs have “New York” or “Manhattan” in the title, hundreds have it in the body of the song. Even individual streets are named, Broadway being only the most obvious.

It wasn’t only that the setting of these songs was urban. Urbanity was their trademark. The songs that Rodgers wrote with Hart were a heady mix of romance and wisecracking sophistication. They showed off the lyricist’s literary skills (these songs are full of long words) as surely as his familiarity with modern slang. In the musical A Connecticut Yankee, Hart has Martin woo Alice (at King Arthur’s court) with a mixture of cod Shakespearean English and American slang: “Thou swell, thou witty, thou sweet, thou grand / Wouldst kiss me pretty? Wouldst hold my hand?” But it’s the slang that wins — “Hear me holler, I choose a / sweet lollapalooza / in thee.” In 1927, “lollapalooza” was a neologism.

The modern world is everywhere in songs about clubs and speakeasies, modern fashions and modern social mores. There are songs about recreational drug-taking (“Some get a kick from cocaine”) and aeroplanes (“Flying too high / With some guy in the sky”); household mod cons and motion pictures (“The radio and the telephone and the movies that we know / May just be passing fancies…”). And it wasn’t just modernity these songwriters wrote about, but sometimes, and rather knowingly, modernism. Lasser quotes Gene Buck’s lyric for Dave Stamper’s “My Futurist Girl” in the Ziegfeld Follies of 1914: “We’ll have a Futuristic honeymoon / In a Cubist house just built to spoon / If you’ll only be my Futurist girl.”

So much for lyrics — they are Lasser’s principal subject. What about the music? The jazz age saw to that. These songs were not themselves jazz, but ragtime rhythms and blues chords increasingly underpinned them. Songs began to sound modern, sometimes self-consciously. “Gershwin keeps pounding on tin,” wrote Ira in a line of the verse of his brother George’s “By Strauss.” Woody Allen’s choice of Gershwin’s Rhapsody in Blue (1925) was perfect for the opening of Manhattan (1979), his panegyric to New York City. This was what New York had sounded like at its most confident.

By then, of course, it was long over, and we can mark the moment at which songwriting moved on. Rodgers took up with a new lyricist, Oscar Hammerstein II. Musical comedy became musical theatre. Sophistication for sophistication’s sake was old hat. To be sure, the songs were still mostly about love, but Rodgers and Hammerstein’s shows were also about serious matters — about domestic violence and racism, nuns and Nazis — and they were not set in modern Manhattan but in rural Oklahoma and the South Pacific, nineteenth-century Bangkok and 1930s Salzburg. The sound of Rodgers’s music changed too, the influence of jazz — which by now was bebop — nowhere to be found. In any case, between The King and I (1951) and The Sound of Music (1959), there was a new music in the offing, and rock ’n’ roll was not specifically urban — it was universal. •

Books & Arts If not, try singing it Zora Simic 11 June 2021 Sinéad O’Connor eschews the notion that art can be “too personal”

Books & Arts Not singing, but being a singer Andrew Ford 14 May 2021 Who exactly were the New Romantics?

The month Victoria held its breath

After the fall: premier Jeff Kennett leaves a press conference on 19 October 1999 after conceding his government’s defeat and announcing his resignation as leader. Graham Crouch/Newspix 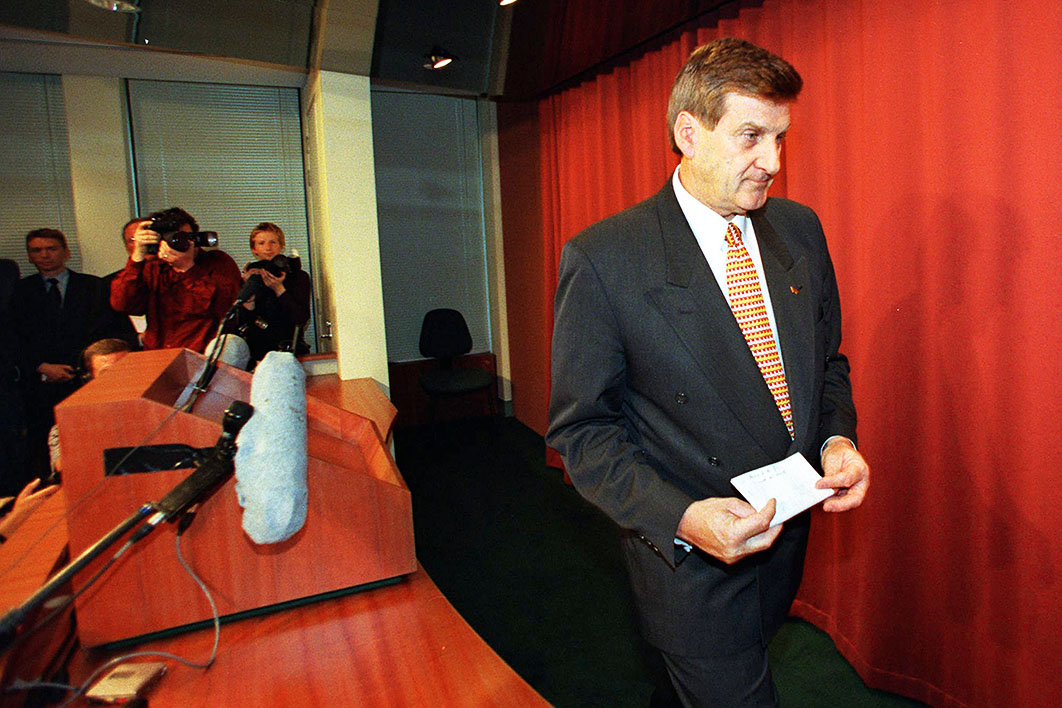 After the fall: premier Jeff Kennett leaves a press conference on 19 October 1999 after conceding his government’s defeat and announcing his resignation as leader. Graham Crouch/Newspix