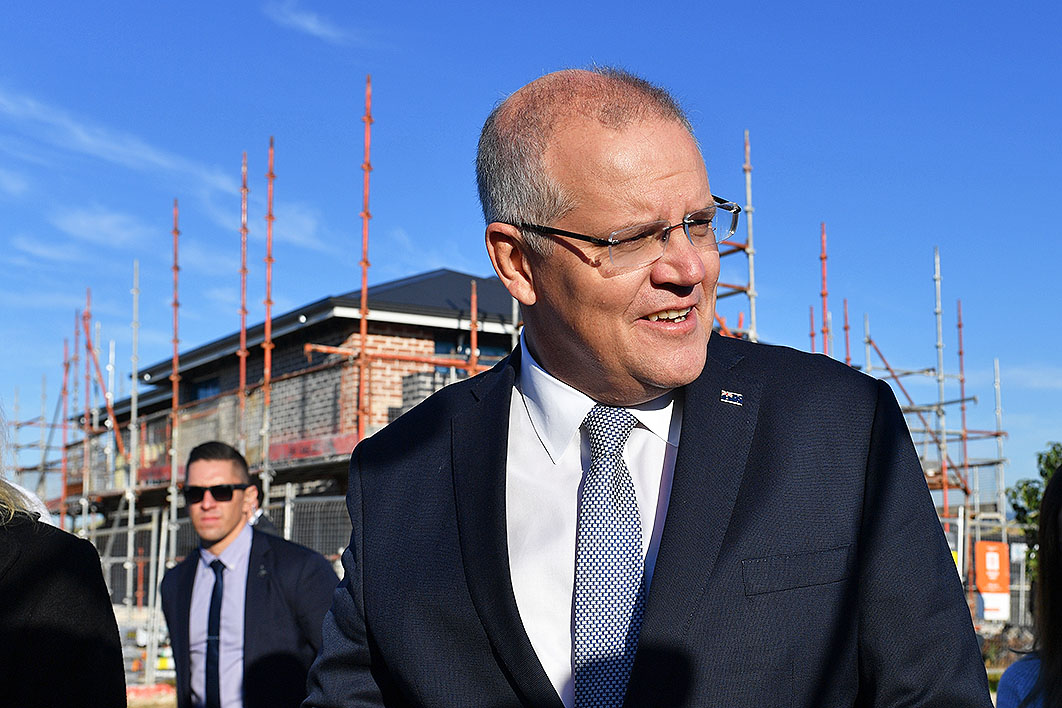 Scott Morrison and Bill Shorten each made two promises at the weekend. Both of them pledged to establish a $500 million fund to help first homebuyers enter the market. And Morrison promised $7 billion to build a road in Melbourne, while Shorten promised $10 billion towards the cost of a rail line.

The merits of the first homebuyers scheme have sparked a lot of debate, but the key point to understand is this: it would be a niche operation. In a housing market that in recent years has lent purchasers about $250 billion each year, the new fund at its peak would take on liabilities equivalent to 0.2 per cent of annual lending.

The transport projects announced in Melbourne, by contrast, are seriously big — and seriously unviable.

East West Link, the freeway the Liberals want to build under the inner suburbs of Collingwood, Fitzroy and Carlton, would unquestionably be a useful addition to Melbourne’s freeway network. You could drive from the Eastern Freeway at Clifton Hill to City Link at Flemington in ten minutes. It is very likely that if it is built, it will also include outlets that would shorten the journey from the eastern suburbs into the CBD and surrounding areas — and it’s those cars that the locals don’t want on their streets.

But it would be horrendously expensive. Tunnelling at freeway width costs well over $1 billion a kilometre. The whole 4.4 kilometre freeway was estimated to cost $7 billion in 2013; Morrison optimistically assumes the same cost now.

The link has been subjected to cost–benefit analysis three times, and has failed every time. The first, for the Eddington report in 2008, estimated the cost was about twice the likely benefit. The second, for the state Coalition government in 2013, was hardly any better, so the government assumed a lot of “wider benefits” to try to make it look good. And even a sympathetic Infrastructure Victoria, costing the plan at its own initiative in 2016, found the benefits would be well short of the cost: $3 of benefit for every $4 of cost.

One must add that standard cost–benefit analysis uses interest rates that are now quite unrealistic: the 7 per cent interest rate assumed is more than twice what governments actually pay. But that is true for all infrastructure projects. East West Link might well pass the test if the test were more realistic — but other projects would still return much more benefit for the same cost.

The best one can say is that East West Link would probably waste less money than the rail line Shorten has now committed federal Labor to help build: a ninety kilometre rail loop — also mostly underground — through Melbourne’s middle suburbs, from Cheltenham to Glen Waverley, Box Hill, Reservoir and Melbourne Airport, where it would connect with the future Airport Rail Link to Sunshine, and eventually, on to Werribee.

We have no cost–benefit analysis for this project, and for good reason. The Andrews government has airily declared that it could be built for $50 million, but no one believes that. If it were subjected to analysis, the Suburban Rail Loop would make the East West Link look good.

The loop would work only if future Victorian governments could do what past Victorian governments have been unable to do: shift Melbourne’s future growth from the outer fringe and the inner core to middle-suburban centres like Box Hill — or Sydney’s Parramatta, a more successful example — which would then grow to become so big that a circular train line to link them would make sense.

(I know that many readers assume that rail investments must be a Good Thing. There are a lot of good rail investments governments could make in Melbourne, as urban commentator Alan Davies has pointed out, but this is not one of them. And that view is widely shared.)

What do these three plans — the home loan guarantee, East West Link and the rail loop — have in common? None of them passed any economic assessment. All of them were dreamed up for political reasons. None was put through the normal policy process. Rather, in each case, the government first decided to commit to them — then let the experts work out what they would cost.

They were adopted, that is, because a government decided it needed them for political branding — not because they would be good investments for the state or nation.

When Labor governments set up Infrastructure Australia and Infrastructure Victoria, they promised us that the new agencies would provide open, transparent, honest assessments of proposed transport projects. It was like manna from heaven. But then reality struck.

Having set up Infrastructure Australia, the Rudd and Gillard governments refused to give it adequate funding. It had only eleven staff, and was unable to carry out more than a handful of project assessments. Its advice, when offered, was ignored. Under the Coalition government, it has been much the same, with frequent changes at the top leading to changes of assessments (of Brisbane’s Cross River Rail, for example) that appeared to be politically motivated.

Infrastructure Victoria has not been politically compromised in the same way, but it has been ignored. Its advice was exactly what Labor had promised: bold, insightful and independent. As a result, it was sidelined when Labor was planning its rail loop. Political staffers replaced the experts as the government’s sounding board, and source of advice.

As Marion Terrill of Grattan Institute has argued, most recently in its excellent Orange Book of advice to the next federal government, Australia must ditch this bipartisan addiction to choosing infrastructure projects on political grounds. Anthony Albanese too has sometimes voiced the same view, but as Labor’s infrastructure minister he would take office with his priorities already decided: a host of projects chosen for political reasons, with neither bipartisan support nor appraisal by independent experts.

Some government, some day, must be brave enough to break out of this habit of treating infrastructure as a political battleground. Two political leaders must be brave enough to take the lead to achieve it. Long ago in Victoria we had an all-party parliamentary public works committee that generally operated in a non-partisan way — as many federal parliamentary committees still do. That’s one key to a solution. The other is to let your infrastructure advisers do their job.

Scott Morrison’s housing plan is less a plan than a thought bubble with virtually no details attached. On Sunday we were told it would have a capital of $500 million, but by Monday Morrison was promising to increase that amount if there was more demand. His goal is to ensure that it helps homebuyers throughout Australia, but there is no mechanism to achieve that. Another goal is to favour homebuyers borrowing from banks other than the big four, but there is no mechanism to achieve that either.

The whole thing is a work in progress, made up in a hurry, so that the prime minister had something new to announce at his policy launch — which he fed to the Murdoch press first, so that they could mislead voters by making it seem much bigger than it is. Treasury had not been consulted on the plan, the Age tells us, and neither was cabinet.

But at least this policy will have small costs — which is why Labor was quick to sign on to it, to squash the issue. More than half a million properties change hands in Australia each year, but, as Morrison has presented it, no more than 10,000 would be eligible for this scheme. That’s just as well, because the way he’s done it makes it more risky than the New Zealand scheme it is based on.

Helen Clark’s Labour government introduced Welcome Home Loans, the New Zealand scheme, in 2003. It was then enthusiastically supported by John Key’s National government, although it remained small-scale. In 2017–18, it approved just 1674 loan guarantees, and its total liability was only around NZ$30 million.

Unlike Morrison’s idea, it is carefully targeted to help those in the bottom 60 per cent of the population — those who genuinely need the government’s help to buy a property. You can’t buy an above-average property using this scheme. To be eligible, you need to be on an income that’s at best roughly average. And you must be able to raise at least 10 per cent of the purchase price independently for your deposit.

(The New Zealand government and its offshoot, Kiwibank, have other ways to help you to do that, and they play a bigger role in helping young people buy a home. In a country without compulsory superannuation, the young are encouraged to save in a Kiwibank superannuation account, from which they can withdraw virtually all their money when buying a home, and receive a home-saver grant averaging about NZ$5000.)

Morrison has blown out those limits. His idea has the thresholds higher by half as much again as the New Zealand version: A$125,000 for a single borrower, A$200,000 for a couple. He didn’t mention any cap on the price of properties — nor on the value of the guarantees offered.

Moreover, instead of requiring applicants to have a 10 per cent deposit, he set that bar at only 5 per cent — with the government guaranteeing the banks for 15 per cent of the purchase price should the borrower default.

The lower you set the bar, the more likely it is that falling prices will leave the borrowers with negative equity: having a property that is worth less than what you owe on it. The lower the bar, the greater the financial pressure that borrowers will be under, and the higher the risk that they will default. And, as the banks warned in today’s Financial Review, the higher the interest rate they are likely to ask borrowers to pay.

One of the reasons why New Zealand’s scheme remains so small is that three of the big four banks (the same as ours, although two have different names) have refused to take part. Westpac is the only big bank participating, and Kiwibank (New Zealand’s fifth-biggest bank) writes 40 per cent of the loans.

If Labor wins Saturday’s election, one hopes it will study the New Zealand scheme carefully before deciding the design of its own scheme: it is now committed to it in some form or other, but it needs to find a way to maximise the benefits while minimising the risks.

At best, this could be a useful niche measure to help those who have been squeezed out of home ownership. As Grattan’s Brendan Coates and John Daley have pointed out in the Conversation, in 1981 even the poor in the twenty-five to thirty-four age group were mostly homeowners. Now fewer than one in four own their own home. Coates and Daley warn: “At this rate, almost half of retirees will be renters in forty years’ time.”

No political party will advocate that outcome, but that is where the existing policy is leading us. The balance has been tilted for too long in favour of housing investors. The Coalition lacked the political courage to fix it. Now, if the polls are right, Labor will have its chance. •