When Betty took over the Pram Factory 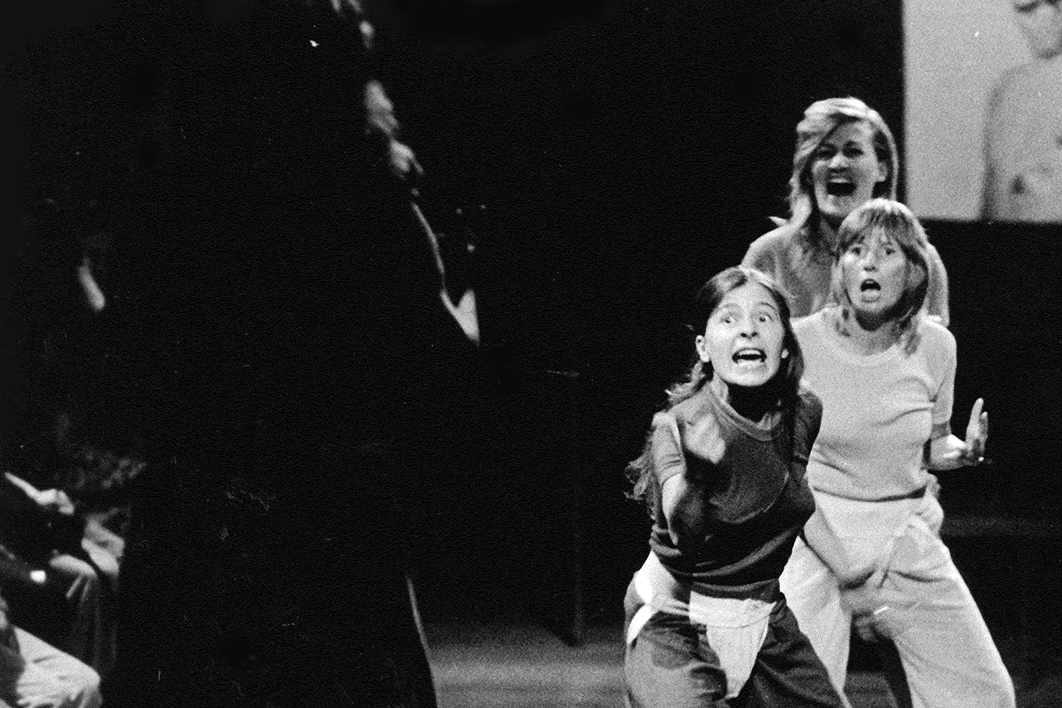 If you’re at all interested in Australian drama, you’ll know at least something about the experimental plays produced by the Australian Performing Group, or APG, in Melbourne in the early 1970s, most of them written by John Romeril, Jack Hibberd or David Williamson. You might also have heard of Betty Can Jump, a play devised by the women in the group, which usually appears only as an afterthought in drama histories. But unless you were one of the 4231 audience members during its one and only run in 1972, you’ll know little or nothing about the production itself. No one filmed it; no one published the script. Only a handful of photographs were taken.

At the time of the performances, I lived in another city and Kath Kenny was a toddler. For us, Betty Can Jump acquired an almost mythical status as a women’s contribution to an important cultural movement. The presence of Helen Garner among the performers — before she wrote any novels — makes it particularly intriguing for readers of Kenny’s new book, Staging a Revolution: When Betty Rocked the Pram, but some will also recognise the artist Micky Allan and the actors Evelyn Krape and Kerry Dwyer, who later became well known. Even Carmen Lawrence, married at the time to the one man in the production, Victor Marsh, was in the play’s orbit.

Kenny makes a virtue of the missing record, gathering around this “lost performance” a history of women’s liberation activism in the early 1970s along with an account of the APG’s experimentation and the Vietnam war protest movement. Though her book is based on PhD research, she writes in a personal register, paying tribute to the subjective perspective that women writers, especially Garner, have made part of their challenge to established modes of history.

To signal her own position in the generations of feminists, Kenny recounts her time as an editor of the Melbourne University student magazine Farrago at the time of the Ormond College scandal recounted in Garner’s The First Stone. She recalls a meeting with Garner: “we met over a cup of tea and looked hopelessly at each other across the generational chasm.”

Generational shifts in feminism form one layer of this lively account of women trying to turn their experiences into a dramatic assertion of women’s right to be heard. The APG might have subscribed to democratic principles, with members sharing the roles of actors, creators, set builders and even cleaners, but in practice the “tyranny of structurelessness” meant that dominant personalities took control. (Women noticed which men cleaned the toilet, as Max Gillies once did immediately before going on stage to perform.)

Arguments between writers wanting faithful productions of their scripts and those committed to collaborative creation were a constant. Sometimes the directors, usually Gillies or Graeme Blundell, took charge. In most productions, women found themselves marginalised, acting stereotypical parts in plays by men or not appearing on stage at all. Betty Can Jump expressed their demands for a place in the new drama.

Despite the production’s ephemeral nature, Kenny found an archive of interviews with the participants recorded by Dwyer in 1975. She also draws on reviews and accounts of the performances in newspapers, APG meeting minutes and group members’ memoirs. She supplements this material with her own recent interviews, bringing in parallel activities of the time — consciousness-raising practices in women’s liberation groups, the first meetings of the Women’s Electoral Lobby, and the experiments of US collective theatre groups such as the Caravan Theatre.

Dwyer’s interviews allow Kenny to imagine scenes from the perspectives of the participants in the show. Most chapters begin by focusing on one of the women at a particular moment — Dwyer arriving at Melbourne University for the first time in 1961, Claire Dobbin nervous in the weeks before the performance — or her own encounter with one of the participants.

In homage to the personal nature of the women’s art, Kenny avoids a dry historical approach, depicting the changing emotions and concerns of the women involved and trying to imagine how uncertain they felt about what they were doing. She gives glimpses of her own experience of the interviews, carefully managing a subjective perspective while providing the important factual elements. In this way she acknowledges the influence on her own writing of this generation of women and their struggle to make the personal political.

Most of the APG members weren’t Melbourne University students but schoolteachers and lecturers at the neighbouring teachers’ college. Their university degrees didn’t include any formal drama history or practice, but some of them, like Krape and Dwyer, had experience in amateur performance and a desire to learn about international drama movements.

Dwyer had won a scholarship to study in France with the theatrical innovator Jerzy Grotowski, returning to Melbourne in the late 1960s full of ideas about the need for performers to strip away their egos in order to accomplish the possibilities of performance. At the time, the APG were performing in the cramped quarters of Betty Burstall’s La Mama theatre. Dwyer and Blundell found the disused Pram Factory in Carlton, which gave the group an expanded rehearsal and performance space (with some members living in its “tower,” recognisable as a location in Garner’s Monkey Grip). The couple’s home in Carlton also became a central meeting place for group members.

By the time Betty Can Jump went on stage Dwyer was in the final months of pregnancy with their first child, directing rehearsals from a seat in the audience. Childcare became one of the issues of conflict at the APG, with some of the women exhausted as well as exhilarated by the long hours of rehearsal on top of the need to care for their children. After five months of collaborative creation and a six-week run of performances they couldn’t face doing it again.

It was gone, but not forgotten. Halfway through her book, Kenny reveals how she found a script for the play — a set of roneoed pages collected by Yvonne Marini — in the APG archives. On this evidence Betty Can Jump appears to be a set of scenes and sketches, more like a revue than a structured play. The two sources of material — Laurel Frank and Kay Hamilton’s research into the history of Australian women, and the consciousness-raising exercises of the participants — sit uneasily together.

The play begins with scenes from the lives of the convict women, flogged and bartered in the first days of the colony, and later portrays Louisa Lawson, Vida Goldstein and other early feminists, but audiences responded more warmly to the personal commentary on what it was like to be a contemporary Australian woman. All up, it ran for forty-five minutes.

As Garner tells Kenny, this kind of performance is ephemeral by nature and design. It belongs to its time and was not intended for literary analysis. Yet Betty left behind many traces. It immediately opened up possibilities for the women involved and, beyond them, it showed other women how they could create works in the theatre. The women who flocked to the show recognised its breaking down of barriers around what could be said about their lives.

Was it a success? Jack Hibberd declared it “indubitably sincere but lamentably short on ideas, direction, dramatic skills and contemporary pertinence.” The women involved remain uncertain, remembering their anxieties from the time and the silence of the APG men, and Garner was surprised when Kenny told her it sold more tickets than any of the APG’s other twelve productions.

There never was another Betty Can Jump. But the women who made it pursued ideas from the show in various art forms and performance modes. For a while some performed with the Melbourne Women’s Theatre Group; others formed new companies to reach migrant women or became involved in groups like Circus Oz. Some, like Krape and Dwyer, made careers in theatre and film; others, like Marini and Marsh, sought a more spiritual understanding of their lives.

In the last chapters of her book, Kenny returns to Helen Garner, reading her recently published diaries in the light of her role in Betty Can Jump. Though on the student side of the Ormond controversy in the 1990s, she can now admire the way Garner has always been ready to argue the toss, never shying away from differences of opinion and perspective. Garner’s influence on Kenny’s own writing is obvious as she generously acknowledges the achievements and difficulties of women of the past generation.

One of the pleasing aspects of this book is the way Kenny follows the subsequent history of women in Australian theatre and is ready to address its present state. She finds optimistic signs of the ongoing influence of feminist ideas in recent stage dramas by Nakkiah Lui, Suzie Miller, Anchuli Felicia King and Kendall Feaver, women writers finally finding a place in the repertoire of some mainstream Australian theatre companies. She is ready to argue about these plays, too, noting that Feaver’s brilliant Wherever She Wanders seems to revive the generational battles of The First Stone.

Staging a Revolution raises eternal questions about the relationship of politics to art and the possibilities of collaboration over individual achievement. It is a fascinating contribution to current reassessments of 1970s feminism, from Michelle Arrow’s history of The Seventies to TV series — Mrs America or the adaptation of Elena Ferrante’s My Brilliant Friend, for example — that recreate the conflicts and debates of the period. It generously acknowledges the continuity between the concerns of the feminists of the 1970s and those of the younger women artists of today. •