Imagining the future of music

To appreciate music, we need to sing and play and compose more of it, says Andrew Ford 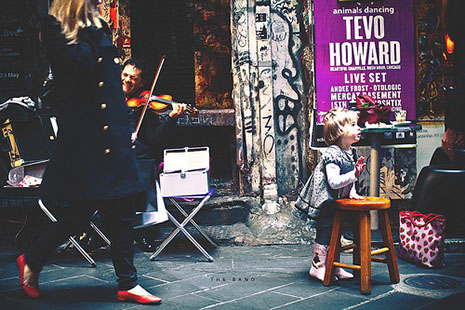 I SUPPOSE all parents see the future in terms of their children. In pondering the future of music, then, as I was recently asked to do by the Music, Mind and Health conference at Melbourne University, my hopes centred on my three-year-old daughter.

Of course hopes always come with obstacles, and very often obstacles are pecuniary. Unless you’re singing – or playing homemade instruments – music will cost money and someone must pay. Australian governments have always supported the arts, not least because there’s copious evidence the subsidies bring in far more money than they cost. You’d have to be crazy or extremely ideological (which is possibly the same thing) to cut funding that generates wealth.

But some governments get in the way, because they want to fiddle and social engineer. You’ve read the platitudes. Music is a universal language. Through music we communicate feelings and tell our own stories. Music should be accessible, always relevant, never elitist. What depressing clichés!

In fact music is neither a language nor is it universal. If it were a language, you could translate it; if it were universal, we would all appreciate all music equally. And music doesn’t communicate feelings – it communicates music. We might feel emotional when we hear it – I frequently do – but that’s a personal response.

“Elitism” is simply the great Australian fear that other people might think they’re better than us. It’s that chip-on-the-shoulder, Mark Latham rubbish about classical music audiences. Any person with an open mind – and that certainly includes three-year-olds – can appreciate classical music. You only have to listen. The longer you listen, the better you will appreciate it. The same goes for any other sort of music.

Our modern lives are besieged by people trying to make us go shopping. In marketing, the aim is to make as much money as quickly and easily as possible. But part of the value of music (and the other arts) is that it offers an antidote to things that are quick and easy. It connects us to each other, and it also connects us to a vast pool of knowledge. This knowledge exists in musical form – in scores and recordings and in our memories. Bach and Beethoven and John Coltrane thought in music. African drummers think in music. Cajun fiddlers think in music. We can only understand them by thinking in music.

Putting music into words is hard, and ultimately impossible. It’s true we can speak technically; we can say, “That’s a diminished chord.” But this is just labelling. To understand the significance and the power of music in our lives and in our world – to appreciate music – we must sing it and play it and compose more of it. We must add to the pool.

So what do I want for my daughter? Well, I want her to be able to sing in tune and with confidence. I want her to have a good ear. It’s never too soon to start with this. I once asked a friend with a far better ear than mine how she acquired it. She told me her dad used to play games with her that involved identifying intervals and chords. She’d have been my daughter’s age, maybe slightly older. She loved the games and so she learnt.

I also want my daughter to read music, because it opens a vast library of literature – some of the greatest musical thought of Western civilisation. One does run up against people who disapprove of teaching musical literacy. They always turn out to be people who themselves do not read music. I have never heard of anyone who regretted having learnt.

I’d like my daughter to play an instrument should she want to. The ability to coax beautiful sounds from a box of wires or a tube with holes in it is one of the most magical things anyone can learn to do. Whether it’s a piano or a banjo, you have a direct connection to other musical minds – some of them great minds. You are placing your fingers exactly where Chopin – or Earl Scruggs – placed theirs.

Now my daughter stands a fair chance of achieving some of these things because her parents are musicians. She hears her mother sing and play the piano; she sees me hunched over manuscript paper. Something is likely to rub off. But I’d like all children to have these opportunities. Because most of all, I’d like Elsie to grow up in a world that values musical thought as much as other types of thought.

(Notice how there was nothing here about music making you better at languages or maths? It does that too.) •