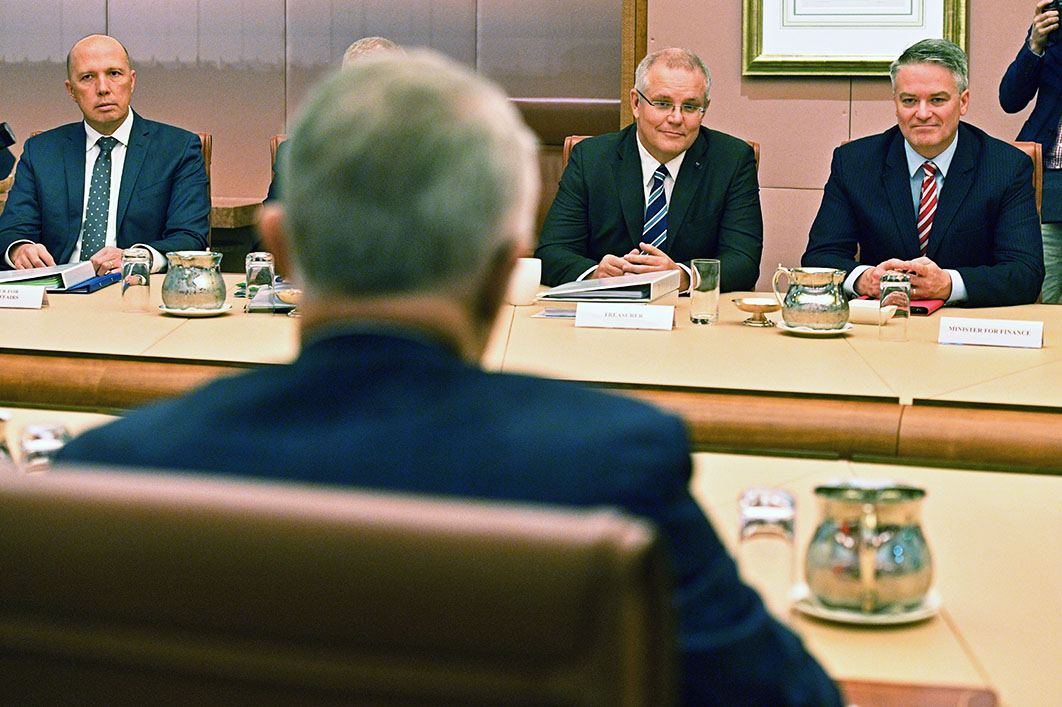 Peter Dutton is gambling with a longstanding pillar of Australia’s economic and budgetary success. By making the biggest cut to permanent skilled migration since the recession of the early 1990s and throttling back skilled temporary migration, he will reduce net migration — and our population growth rate — significantly. The annual 1.6 per cent population rise assumed in this year’s federal budget could be too high by up to a quarter, and a smaller increase in population will reduce tax revenue and undermine the affordability of the government’s tax cuts.

The cut in numbers doesn’t come as a result of any official reviews. Indeed, a joint Treasury/Home Affairs report last month lauded the contribution of skilled migration to Australia’s economy and budget, as did a 2016 Productivity Commission report on Australia’s migrant intake. They echoed a strong response by treasurer Scott Morrison to Tony Abbott’s calls for sharp reductions in migrant numbers earlier this year.

But Australia’s fertility rate has declined since the Australian Bureau of Statistics released its population projections in 2012. And given the changing circumstances — a growing proportion of women in the workforce, high childcare costs, slow wages growth and record levels of household debt — it is difficult to see why Treasury assumed the fertility rate would rebound to 1.9 babies per woman by 2020.

Treasury is on slightly safer ground with net migration, which it assumes will decline from 242,600 in 2017 to 221,400 in 2021. Such a decline is highly unusual at a time when the economy is forecast to grow strongly. But given Dutton’s actions, has Treasury actually underestimated the rate of decline in net migration?

Home Affairs has confirmed that the 2017–18 migration program will come in significantly below the “ceiling” of 190,000 people (possibly 20,000 lower). The new visa category for New Zealand citizens resident in Australia for at least five years will intensify the fall in numbers: these visas, granted to people who have already been counted as arrivals, will be included in the skill stream of the migration program. With around 10,000 expected to be issued in 2017–18 (and numbers likely to remain at that level or higher for a number of years), the effective cut to the program will be closer to 30,000.

The ceiling for the humanitarian program has increased to 18,350 for 2018–19. This is not very different from the level in recent years, when the one-off intake of an additional 12,000 Syrian refugees boosted numbers. Those 18,350 visas will also need to allow for those among the 30,000 onshore applicants for refugee status who are successful in their bid.

Then there’s temporary migration. The number of skilled temporary entrants (formerly 457 visa holders) has been in steady decline since a peak of just over 200,000 in March 2014. By March this year, the number was just over 150,000. While a strengthening economy would usually lead to an increase, Peter Dutton’s changes, which took full effect from March 2018, will not only significantly reduce the contribution these visa holders make to net migration but also have a flow-on impact on overseas students and working holiday-makers.

The number of overseas students in Australia has surged since the Knight Review was implemented in 2012. But the growth in offshore overseas student visas slowed in 2017–18 as a result of a range of factors, including a significant increase in fees charged by Australian education institutions and the narrowing of opportunities to extend stays in Australia.

Because the number of student visas granted to visitors, students and others already in Australia continued to increase strongly in 2017–18, the stock of overseas students will continue to grow in the short term. But the significant narrowing of opportunities to extend stays will result in a substantial increase in departures of students over the next few years.

The impact on working holiday-makers — whose contribution to net migration has been declining since 2012–13 — will be similar. They too will face fewer opportunities to extend their stay in Australia.

Offsetting these factors will be an increase in people arriving on visitor visas and then applying for a long-term temporary stay or permanency. This group has been growing in recent years and numbers are likely to accelerate because of the large backlog in the family stream and a further increase in processing times for employer-sponsored visas.

Net movement of NZ citizens to Australia will continue to be subdued. When the NZ economy performs poorly, NZ citizens become a substantial component of net migration. With current forecasts suggesting that the NZ economy will remain strong, the push factor has weakened.

While Australia’s stronger economy in 2016–18 may have attracted some of these expatriates back (and slowed the departures), the stronger world economy will still be attractive to many ambitious young Australians. Unless there is a sharp downturn in the global economy, a high level of emigration from Australia will continue.

All this suggests that there is little chance of Australia’s population maintaining an average annual growth rate of 1.6 per cent. As a result, the level of net migration in 2016–17 will represent a one-off peak. Peter Dutton’s policy changes will ensure net migration averages less than 200,000 per annum over the next four years. The key swing factors will be the extent to which overseas students and temporary graduates delay departure (given that their options for staying are now very limited) and the relative strength of the Australian economy.

This would have serious implications for Treasury’s assumptions about gross domestic product, household consumption growth, jobs growth and tax revenue over the next four years. Given that the cuts target the skilled migration stream and temporary entrants, who have high participation and employment rates, there will also be a negative impact on Treasury’s assumptions for participation and productivity.

This is a gamble the government should be explaining to the Australian public, to state and territory governments and to the business community, many of whom will be making decisions on the basis of the assumed 1.6 per cent population growth. The minister’s gamble also raises questions about the affordability of the government’s proposed tax cuts. ●

Abul Rizvi was a senior official in the Department of Immigration from the early 1990s to 2007 when he left as Deputy Secretary. He was awarded the Public Service Medal and the Centenary Medal for services to development and implementation of immigration policy, including in particular the reshaping of Australia’s intake to focus on skilled migration. He is currently researching a PhD on Australia’s immigration policies.