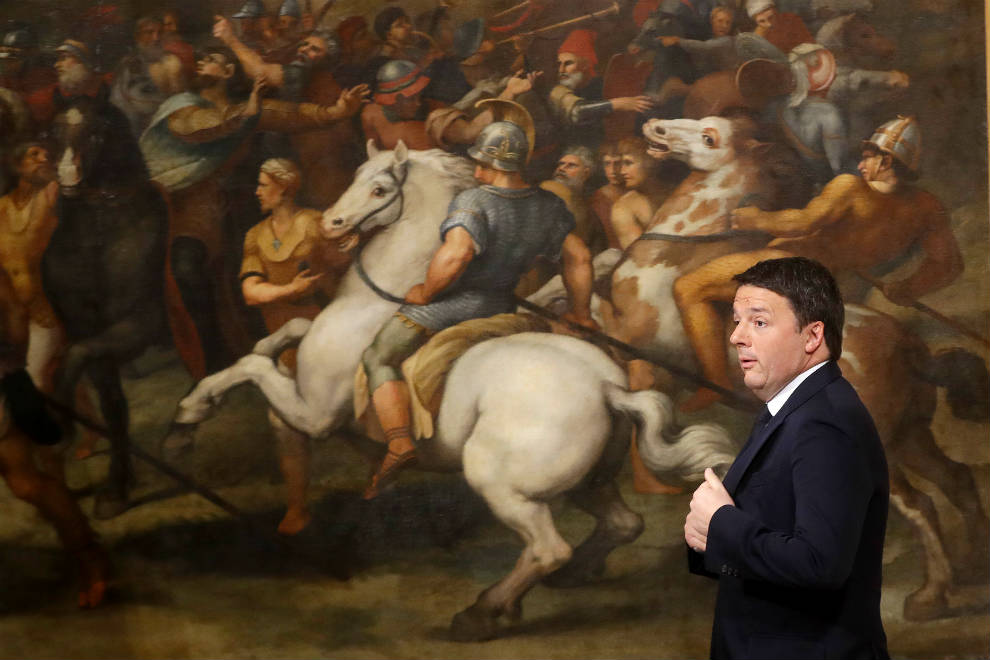 If nothing else, it was a fitting end to the political career of Italy’s demolition man. It turns out that the young prime minister who won the top job by promising the country he would crash through or crash simply crashed. The self-styled rottamatore – a word that comes from the junking of cars for scrap metal – was himself junked by the political elites he had dared to take on. His youth, his drive, the novelty of his aspirated Florentine accent – none of these were enough for him to prevail.

The conservatives finally got Matteo Renzi. Not just conservatives on the right, but a partito trasversale – a cross-party coalition ranging from the far right to the far left and everything in between, including the populist Five Star Movement and the xenophobic Northern League. There were conservatives who wanted to preserve a constitution they saw as postwar Italy’s democratic cornerstone. There were others who feared the change on offer would usher in a world they didn’t trust. And, of course, there were those who just hated Renzi.

He was a polarising figure – not just for the broader Italian electorate but also for his own side. The Democratic Party, an uncomfortable amalgam of former communists, socialists and left-leaning Christian Democrats, was always going to struggle with a leader who was popular (and, by implication, populista, for a double-digit popularity reading in the polls is all a political figure needs to be accused of demagoguery).

Renzi’s Keatingesque strut was a challenge to the social order; his attack on the party’s post-communist gerontocracy and its string of failed leaders was uncompromising and insulting. He saw them as the living dead, a freak show somewhere between Madame Tussaud and Tutankhamun. He rubbed their noses in electoral failures, mocked their lack of pragmatism, and suspected their thinly veiled nostalgia for the postwar First Republic, when communists could guarantee their ideological purity by losing all national elections.

On Sunday the living dead exacted their revenge. Former communist leaders who had remained in parliament all these years emerged from the shadows to oppose Renzi’s constitutional amendments, knowing that a victory of those voting “no” would end Italy’s brief flirtation with reform. Former party leader Pier Luigi Bersani – the Cuban cigar–chomping ex-communist from central casting who lost the 2013 election – was there; so was Massimo D’Alema, the party leader who was shoe-horned into the prime ministership in 1998, only to step down after a lacklustre 500-or-so days in power.

But, ultimately, Renzi’s most powerful enemy turned out to be the man in the mirror. He gambled everything by taking on the Italian constitution, badly underestimating the Italian people’s quiet and largely dignified respect for the Republic’s founding document. Renzi asked the electorate to tweak a document that had helped Italy to emerge from what everyone – except the Italians themselves – would describe as a civil war, in which neighbours fought each other in the name of political ideology as Allied troops fought their way up the peninsula. This constitution saw the country through the lean postwar years, through the economic miracle of the fifties and the sixties, through the “years of lead” terrorist attacks, right up until the game-changing collapse of the Berlin Wall.

The 1948 constitution was the result of a delicate political process that had begun two years earlier. Enemies who had been shooting one another only months before sat around the table of the Republic’s Assemblea Costituente and came up with the mother of all political compromises.

It was a flawed document, but it was their document. In a country in which official language is used to obfuscate and deceive, the Italian constitution is the one exception: these words are crystal clear. There’s a reason for the simplicity of the language: every word was the result of horse-trading between political adversaries who, at best, didn’t trust one another. The opening words, L’Italia è una Repubblica democratica fondata sul lavoro (“Italy is a democratic republic founded on work”) was a reworking of language put forward by socialists and communists, L’Italia è una Repubblica democratica di lavoratori (“Italy is a democratic republic of workers”). Workers was too left-wing, but “work” – who could object to that?

Whatever their differences, the founders could agree on one thing: the new state would do whatever it could to prevent a strongman returning to power. The shadow of Mussolini permeates the document: it’s there in the weak executive, the powerful legislature and the fiercely independent judiciary. Yet, oddly, other aspects of Fascism’s cultural legacy – such as the corporazioni, the anti-competitive professional guilds that still dominate Italian life – were left unchallenged.

The constitution was never an unmitigated success. The weakness of the executive meant that governments could – and did – fall at the drop of a hat. Even a minor frontbench reshuffle would require the government to resign its commission; major legislation would require la fiducia, a vote of confidence by parliament. As for the judiciary, investigating judges made the most of their absolute independence. If Italy’s highly politicised, unelected magistrates were let loose on Australia we would call it a coup d’état.

But more importantly, Italy was stifled by stability. To non-Italians this sounds counterintuitive: isn’t this the country that has become synonymous with political upheaval? Sure. Yet when a government fell, it was put back together again with contributions from the same four or five (non-communist and non-fascist) parties. There was no renewal; no opposition party taking power to sweep away the previous administration’s sweetheart political deals and jobs for the boys. These fifty years of paralysis go some way to explaining why Italians see their constitution – and the institutions it safeguards – so differently.

As an Australian who has wound up with Italian citizenship, I had no qualms in voting “yes” at the referendum. At the heart of Renzi’s proposal was an end to bicameralismo perfetto (“perfect bicameralism”), which gives equal weight to both chambers of parliament. It is this part of the postwar balancing act that has had an extraordinarily deleterious impact on Italian governance. Imagine an Australian government collapsing every time it lost a vote in the Senate.

As it happened, there was a political imperative behind Renzi’s ill-fated decision to take on equal bicameralism. Having promised reforms, he had come to realise that his efforts could be stymied by a recalcitrant parliament (the recalcitrance often coming from his own party). He needed to create a system of government in which the executive could have greater powers to bring about change.

But Renzi’s constitutional reforms suffered from mission creep. Had they been approved in Sunday’s referendum, the changes would have ended equal bicameralism by decommissioning the Senate altogether, replacing it with a chamber of provincial and regional politicians who would receive no pay. Again: I could live with it. Canada and Britain both have appointed upper houses and they are both functioning democracies. New Zealand dumped its upper house in 1950 and lived to tell the tale.

But real Italians (unlike me) saw things differently. And the reason, I suspect, is cultural. For us, elections are the democratic linchpin: when a government disappoints us, we seek catharsis by kicking it out of office. My conservative parents both voted for Gough Whitlam in 1972 and 1974 because they felt the pressing need for social change; they voted Whitlam out of office in 1975 because his economic mismanagement had let them down.

With the exception of the late 1990s and the noughties, Italians haven’t experienced the deep, slightly savage joy of kicking an incompetent government out of office. Between 1948 and 1992 they had to cop a centrist, Christian Democrat–dominated government and they had to cop it sweet. The only alternative, the communists, were no alternative at all.

Throughout this long winter of stifling stability, the institutions seemed to offer Italians some protection. It was not protection from corruption, which proliferated, but from something worse. The constitutional set-up – the fruit of hard-fought political compromise – represented a world in which a delicate balance could be maintained. There would be no strongman; cool heads would prevail.

In this world, concertazione – a public relations system based on compromise – would be the name of the game. Reform, if needed at all, would happen by consensus by forcing the parti sociali – unions and employers – to negotiate. The professions would be allowed to operate their closed shops; unions would never be compelled to utter the word “productivity.”

This is the Italy that has ended Renzi’s career. In this firmament, the populist Five Star Movement was on the side not of radical reform but of Italy’s postwar past. This was not a Marine Le Pen moment; it was a Charles de Gaulle moment. It was Italy’s last-ditch effort to fend off a world which is asking it to change. And the man who embodied that change is gone; the Italy he had hoped to demolish has fought back and won. •

James Panichi is the Brussels Managing Editor at MLex.

With an election due in a year, the National government faces the challenge of life without leader John Key 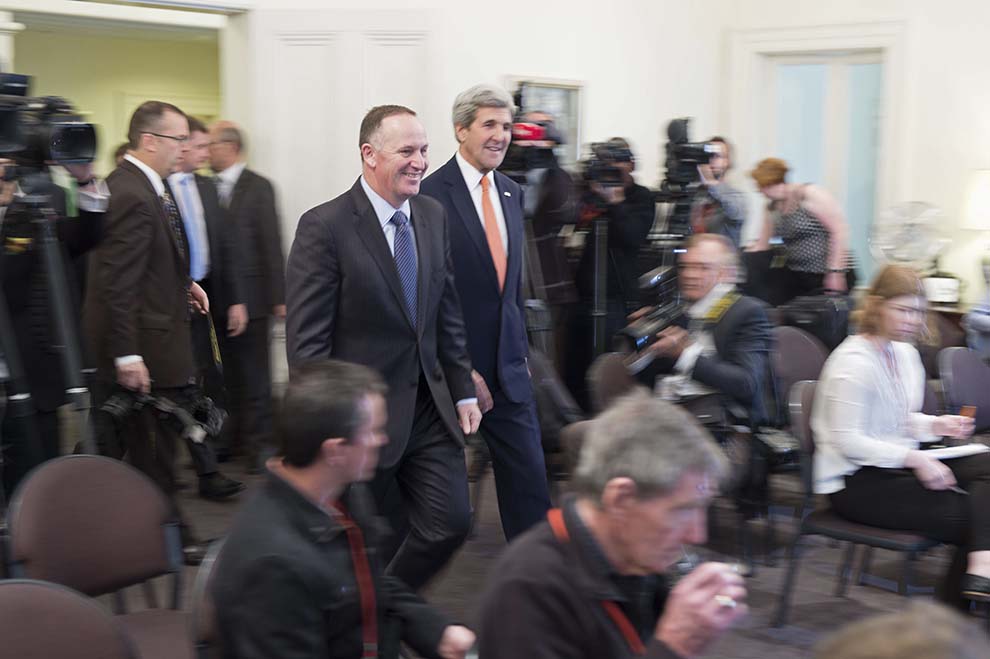