Look what they’ve done to my song 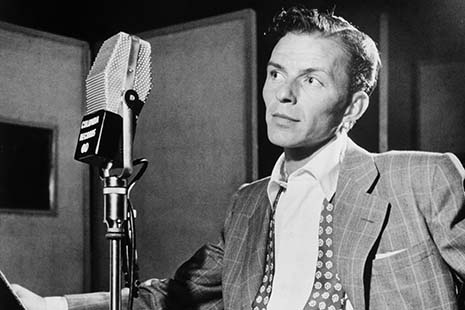 So famous that no one complained: Frank Sinatra’s changes were usually small but sometimes significant. Detail from portrait by William P. Gottlieb/Gottlieb Collection, Library of Congress

I was in my local pub the other Sunday and the lunchtime entertainment was being provided by quite a good pop/jazz combo with a singer. One of the songs she sang was “Summertime,” but she got a word wrong. Instead of “One of these mornings you’re gonna rise up singing,” she sang “wake up singing.” I dare say it jarred with me, at first, because I’m an appalling, know-it-all pedant (though I did manage to resist going up to her to point out her mistake). But later I found myself thinking about this line, and about what a very fine choice of word Ira Gershwin had made. Please bear with me for a brief paragraph of textual analysis.

“Rise up” is better than “wake up” in several different ways. First, it is unexpected. Everybody wakes up in the morning – so “wake” is dull and obvious. But no one wakes up singing, that doesn’t even make sense. However, to rise up singing is to resemble “the lark in the clear air” and to be “as free as a bird,” but without recourse to either of those clichés. “Rise up singing” is a phrase that shows us something, it doesn’t tell us, and anyway the bird imagery continues in the next line about spreading wings. “Rise” is also better than “wake” from the performer’s point of view because it has a stronger sound. The initial “r” is better to articulate the note than a weak “w” would be, and the vowel is far stronger and also easier to sing, especially because the melodic line covers a rising interval. Oh yes, there’s yet another reason the original word is better – “rise” rises in the tune. They knew what they were doing, did George and Ira Gershwin.

There are lots of reasons a singer might sing a wrong word, ranging from mishearing to forgetting to “improving.” When Linda Ronstadt recorded Warren Zevon’s touchingly ironic song about heroin addiction, “Carmelita,” she changed something that subtly altered the whole meaning. Zevon’s version describes going out to score heroin as follows: “So I pawned my Smith Corona / And I went to meet my man.” As sung by Ronstadt, it became: “So I pawned my Smith & Wesson…” In case you’re not following, a Smith Corona is a typewriter, a Smith & Wesson a gun. Just three syllables and the whole song lurches from wry to melodramatic. Actually, there was an early Zevon demo that also had “Smith & Wesson,” but the fact that he changed it shows why he was a good songwriter. And as with “rise” versus “wake,” “Smith Corona” is easier to sing – the fit of the music and the lyric is tighter.

Ronstadt, a repeat offender, also changed a line in Elvis Costello’s “Alison.” In this case, it was gender-related, but still her new lyric was poorer than Costello’s original. This is a second-person song, the singer addressing a lover whose ardour has recently cooled.

“I don’t know if you are loving somebody,” Costello sang to “Alison,” “I only know it isn’t mine.” “Somebody”/“some body”: it’s clever, and typical of Costello. But in Ronstadt’s version the punch line became, “I only hope he isn’t mine,” which is confusing, momentarily suggestive of necrophilia, and weaker in every way. At least though we could all hear that Ronstadt was heterosexual. Costello was scathing, though he later confessed that he’d enjoyed spending the royalties.

When it came to rewriting, a far greater culprit than Ronstadt was Frank Sinatra. Of course he was so famous no one complained. Usually Sinatra’s word changes were small, but I can think of none that was an improvement. In “Makin’ Whoopee,” much of the wit of Gus Kahn’s lyric lies in its timing. “The groom is nervous. / He answers twice”: there’s a gap after “nervous,” the groom’s nervousness reducing him momentarily to speechlessness. Perhaps the gap made Sinatra nervous, because he added a word to fill it: “The groom is nervous that / He answers twice.” It not only robs Kahn’s lyric of its wit, but it also pays scant regard to English grammar.

Sometimes, Sinatra gilded the lily. In the Gershwins’ “A Foggy Day in London Town,” he sang, “I viewed the morning with much alarm.” The word “much” was Sinatra’s addition, but far from intensifying the lyric, it simply trashed the little moment of word play Ira Gershwin had carefully set up with the juxtaposition of “morning” and “alarm.” Singers really should think twice before they deliberately change the words to a song. If the words were written by Ira Gershwin – or for that matter Warren Zevon or Elvis Costello – the singer is unlikely to improve them.

Mind you, I don’t suppose the singer in my pub was even aware she was singing the wrong word. Often with very famous songs there’s a Chinese whispers effect at work. However intricately the music and words have been knitted together, it is the sound of the song that is paramount, and that sound will inevitably be more to do with the music than the words.

Music leads singers astray. Composers, too. I have sometimes found, in setting words to music, that I can get them wrong even as I’m working on the score. Last year’s song cycle, Last Words, contained one wrong word along with three that were mistakenly left out. I noticed the omissions as I sat listening to a performance in Elder Hall in Adelaide. Like the rest of the audience, I had the printed program on my knee and was following the words, three of which Jane Sheldon failed to sing – because I had failed to set them to music. The wrong word was pointed out to me by an audience member only after a more recent performance. And yes, like Sinatra’s alteration to the lyric of “Makin’ Whoopee,” the word I had (accidentally) changed and put to music made semantic nonsense of the poem. •

Composer Andrew Ford presents The Music Show at 10 am and 10 pm each Saturday on ABC Radio National. His latest book is Try Whistling This: Writings About Music.