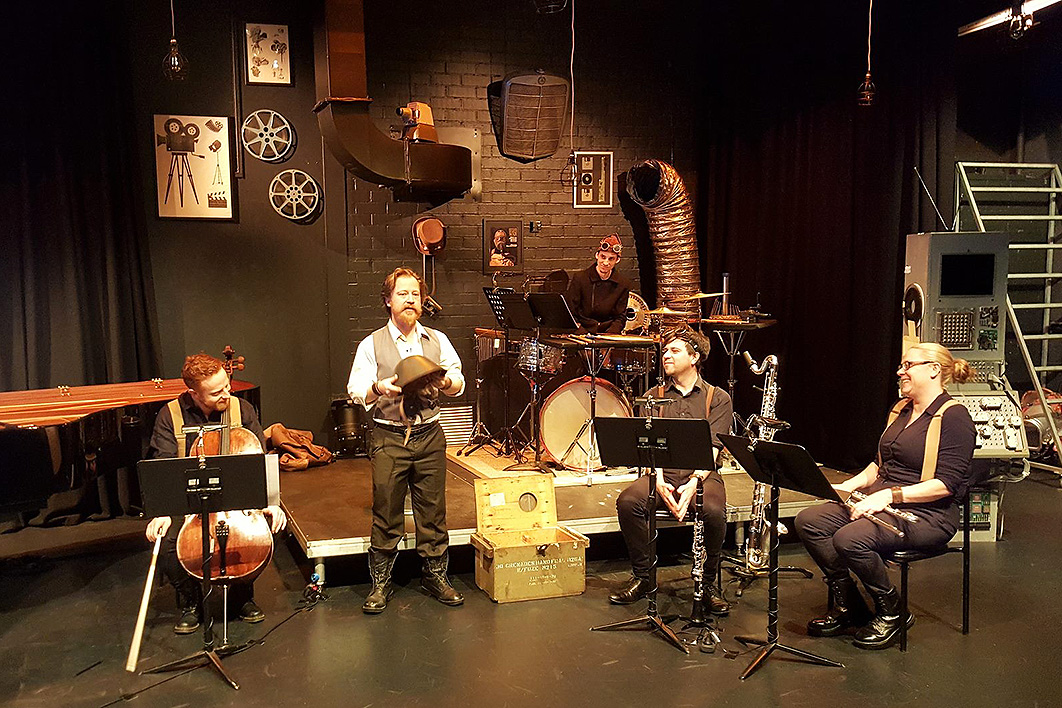 The hackneyed made strange: dress rehearsal of Sally Greenaway’s 7 Great Inventions of the Modern Industrial Age, featuring the Syzygy Ensemble and Dene Kermond, in Shelly Higgs’s production at the Street Theatre, Canberra, in July last year.

“Ninety per cent of humanity’s total body of knowledge & material values developed during the twentieth century.” That’s the assertion on the cover of a new CD of Sally Greenaway’s music, and while I don’t know who’s counting, and there are no sources cited for the statistic, it doesn’t actually seem unlikely.

Under the circumstances, then, it must have been hard, in The 7 Great Inventions of the Modern Industrial Age, for Greenaway to boil all these discoveries and inventions down to the magic number seven (days of the week, deadly sins, ages of man, dials, seals, dwarfs and brides for brothers), but that’s what she’s done, and she’s done it rather winningly.

The complete work must be experienced in the theatre, where it’s a multimedia performance with an actor, pitched somewhere between a cabaret and a medicine show, but as a purely musical experience the piece is surprisingly compelling. The packaging of the disc, designed by the composer, supplements the listening experience, not only with information but also with imagery inspired by circus tents, theatre posters and old-fashioned advertisements of the cures-for-baldness variety.

Ten years ago, Sally Greenaway seemed like the new voice in Australian jazz. She was twenty-four and her first foray into writing for big band was Falling of Seasons, which she conducted with the JazzGroove Mothership Orchestra in the finals of the 2008 National Big Band Composition Competition. She won the prize (I was a judge) and seemed set for a career in jazz venues, both as composer and pianist. In fact, the next I heard of her was in a classical context, and in the decade since her big-band victory she has gone on to compose songs and choral pieces, chamber music, works for solo instruments and for orchestra, film soundtracks and music for the theatre. Her versatility shows in The 7 Great Inventions.

The originality of the project lies not so much in the sound of the music, let alone its style. Like a lot of composers of our day — Martin Wesley-Smith and Elena Kats-Chernin come to mind — Greenaway uses familiar musical types to create surprising juxtapositions and ironic commentaries. Clichés are refreshed, the hackneyed made strange.

For example, the whole thing begins with a solo piano (Leigh Harrold) playing the opening notes of Bach’s Two-part Invention in F, except that it immediately goes wrong and turns into ragtime. The piece is called “Invention Reinvention,” and it works as a sort of overture. The scene is set historically — we are clearly at the start of the twentieth century — but also musically. We can expect more of this sort of thing.

“Telecommunications,” the first of the seven main inventions (or sequences of inventions), is unveiled with a shimmering MGM-like gesture from the whole band — Melbourne’s Syzygy Ensemble — suggesting curtain up on a Hollywood musical or Broadway show. Greenaway has chosen her inventions not only for the way they improve our lives but also for their inherent and frequent disappointments and dangers. So the musical pizzazz is quickly replaced by white noise and radio static, out of which emerges a slow clarinet blues (Robin Henry) suggesting the 1920s. Later, a newsreel boast about the coming of television — of “pictures from the sky” — is answered with a call from the whole ensemble to “fix the aerial!” (Greenaway prepared for writing this piece by talking to people aged ninety and over, and she draws on their memories.)

“Aviation & the Space Frontier” leads from a Cape Kennedy countdown to rising, swirling arpeggios, astronauts Cernan and Schmitt singing on the surface of the moon, a flute tune (Laila Engle) that might have escaped from a Delerue film score and then, ominously, Jack Swigert’s voice informing Houston that Apollo 13 has encountered “a problem.”

At the heart of the work is that most twentieth-century of all inventions, “Massed World Warfare,” and here Greenaway doesn’t know what to do. A cello (Campbell Banks) attempts heroic gestures that fizzle into distorted harmonics. The piano provides banal chords. Nothing leads anywhere, and it’s as honest a response to the topic as you could imagine. Where many composers would opt for thrills and spills, Greenaway, rightly, gives us ugly torpor.

Like Beethoven after his Pastoral symphony storm, the composer now writes a hymn — not of thanksgiving, but to freedom. It’s the most surprising and touching moment in the piece, as these players begin to sing simple phrases, first one voice, then two until the whole ensemble (save the pianist, who eventually provides an accompaniment) has traded its instruments for song.

There’s nothing quite like this piece. It will be interesting to hear what Sally Greenaway does next. • 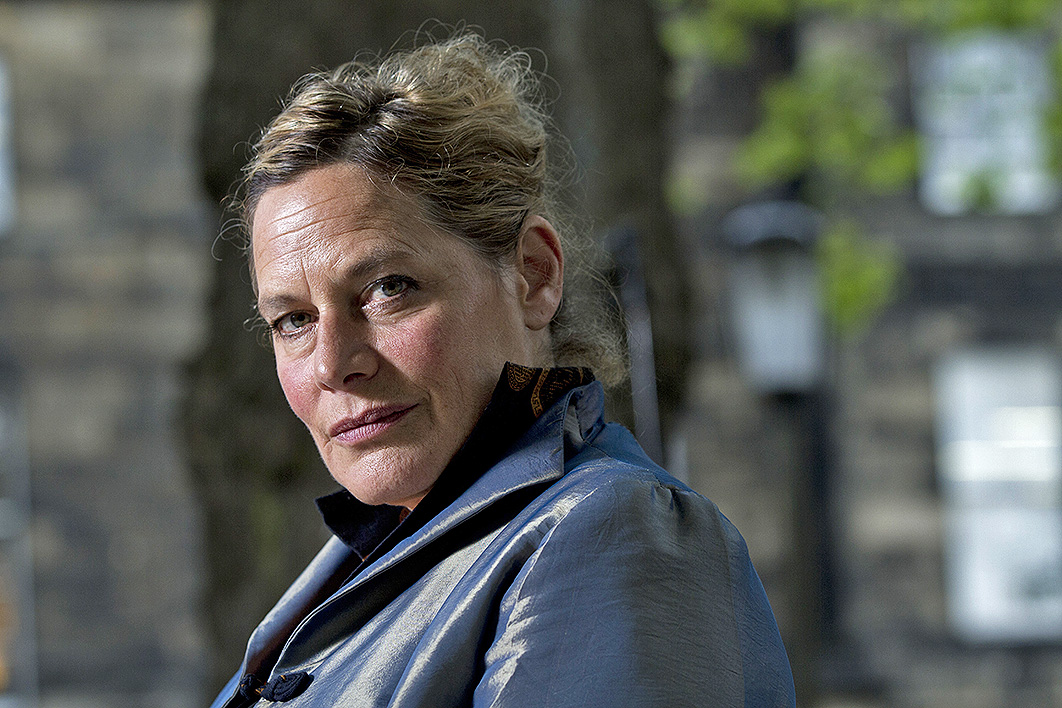