Margaret Thatcher and the moral neutrality of art

The soundtracks of other people’s lives can be unsettling 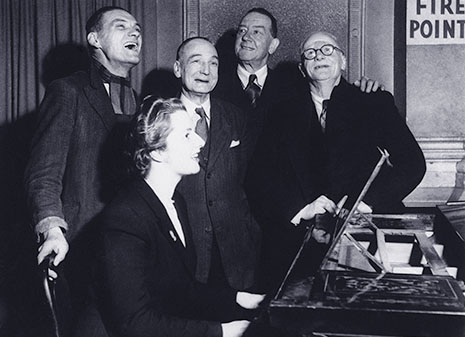 Margaret Roberts, the youthful Conservative candidate who became Margaret Thatcher, accompanies four voters in a sing-along after a brief political argument in the bar of the Bull Inn, Dartford, in 1950.
Photo: Associated Press

THE night Margaret Thatcher died, BBC Television aired a documentary it had ready to go. The sad music at the start was by Michael Nyman, composed in 1988 for Peter Greenaway’s film Drowning by Numbers. One of Nyman’s most affecting creations, the entire score is based on the slow movement of Mozart’s Sinfonia Concertante, reimagining that piece almost phrase by phrase. Somebody must have thought it captured and enhanced the mood of national mourning likely to follow Thatcher’s death, at least in some British households.

Well, not in Nyman’s. Alerted on Facebook to the use of his music, the composer’s response was “Oh shit.” Of course, there was little he could have done to stop it, even had he known in advance. Once a piece of music is written and recorded it effectively leaves the composer’s control. So long as appropriate remuneration is made, it can be used willy-nilly.

My own choice of music to sum up Thatcher would have been almost anything by Andrew Lloyd Webber (okay, perhaps not “Don’t Cry for Me Argentina”). He and Thatcher seem to fit so well together. And what’s more, Baron Lloyd-Webber of Sydmonton in the County of Hampshire would doubtless have been honoured by his music’s use. But was Thatcher really a fan of his stuff? Actually, probably not.

I am not alone in wanting to think of Margaret Thatcher as a cultural low-brow, if not an outright philistine; so much of the time she seemed to behave like one. Yet the truth is that she was quite well-read and her musical tastes were sophisticated. According to Alan Bennett’s diaries, when Philip Larkin was invited to a function at 10 Downing Street during her prime ministership, he asked if she could quote from any of his poems. (Only Larkin, an ardent admirer, would have dared.) She came straight back with two of his most chilling lines, “All the unhurried day, / Your mind lay open like a drawer of knives” from “Deceptions.”

According to author and broadcaster Norman Lebrecht, Thatcher also had something of an obsession with the music of Béla Bartók, especially when it was conducted by Georg Solti. She knew about opera, frequently attending Covent Garden, where she always paid for her ticket; and that’s also where she took visiting heads of government. (It was Tony Blair who introduced the G8 to Britpop.)

Of course, when you disapprove of someone’s political methods, you want to disapprove of everything about them. In the 1980s, I disagreed heartily with Thatcher – she is one reason I now live in Australia – but suddenly I find we shared a love of Bartók. Surely that can’t be right!

But where art is concerned, things are seldom black and white. The moral neutrality of music, say, means that it can be admired, appreciated and understood – loved, in fact – by people of all political persuasions. As usual, the Nazis represent an extreme, not only because of their well-documented love of the music of Wagner, but also because so many of those high-ranking officers seem to have attended concerts. Many of them played instruments. Some played chamber music together, and presumably some of them did it tolerably well – with insight, with sensitivity.

Should we be horrified? Does it invalidate the music to know that Nazis loved it? Where Wagner is concerned, there are those who think it does. Should it alter our appreciation of a Beethoven symphony to know that the wonderfully played performance to which we are listening on that slightly crackly recording was taking place before an audience that included Joseph Goebbels?

When Sibelius turned seventy in 1935, Germany awarded him the Goethe medal, together with a certificate signed by Hitler. Was this the fault of Sibelius’s music? The same year, the New York Philharmonic Society conducted a survey among its concert-goers which revealed that Sibelius was their favourite composer, living or dead.

In his preface to The Picture of Dorian Gray, Oscar Wilde wrote that “No artist has ethical sympathies… Thought and language are to the artist instruments of an art. Vice and virtue are to the artist materials for an art.” He wasn’t, I think, suggesting that artists shouldn’t care about politics or even that their art should never promote political ideas, but that the artistic bit of art – the bit that makes a poem a poem (and not an op ed piece), that makes a song a song – is always apart from ethics.

Perhaps this explains how Nazis might genuinely have appreciated Beethoven, and why their appreciation should never hinder our own. It might even make Michael Nyman feel a little better about his music turning up in a tribute to Margaret Thatcher. •