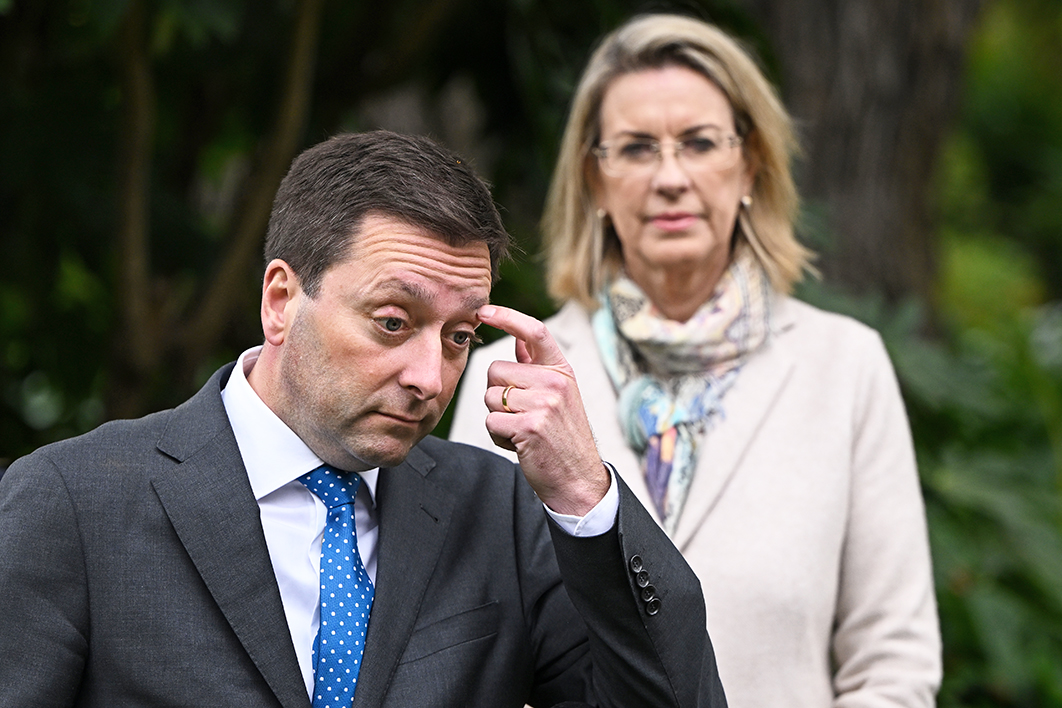 Victorian opposition leader Matthew Guy faces a grim challenge at next month’s state election. Last time round, in 2018, his party lost major territory to Labor’s “Danslide,” giving the government a healthy buffer of fifty-five seats to the Coalition’s twenty-seven. Labor and the premier — despite four years marred by scandals and crises, including the first recession in thirty years, some of the worst Covid outbreaks in the country, and the nation’s longest lockdowns — retain comfortable leads in most polls.

In fact, the most recent set of numbers, from the Age Resolve poll, shows a two-party-preferred lead of twenty points for Labor: Danslide 2 territory. Simply regaining what was lost in 2018, let alone winning a majority, will be a major achievement for the Liberals. And the task is rendered all the more challenging by independent candidates seeking to replicate the “teal bath” of May’s federal election in Liberal seats like Kew, Hawthorn and Mornington. All this in the state once seen as the jewel in the Liberal crown.

And yet, every day, there he is, on the telly, in the papers, on the campaign trail: Liberal leader Matthew Guy trying to scale his election mountain. His climbing pick for this year’s attempt to reach the electoral summit? Health policy. Since returning to the state leadership a year ago, Guy has spent months attacking the government’s alleged mismanagement of the state’s health system — the shortages of hospital beds, trip-zero delays, ambulance ramping, gigantic elective surgery waitlists and more.

To repair the damage, he has promised major investments in new and refurbished hospitals, in massive recruitment and training schemes, and to slash waiting times. The result has been a runaway bidding war on health: so far, the Liberals have promised $4.5 billion for hospital infrastructure alone, and Labor is north of $6 billion, matching the Liberals on some points, exceeding them on others.

To an extent, the strategy suggests the Liberals have learnt from their mistakes. In 2018, Guy led the party to an ignominious defeat after campaigning heavily on crime — and particularly the threat supposedly posed by “African gangs.” The party’s own campaign post-mortem noted that “the focus on African gangs became a distraction for some key voters who saw it as a political tactic rather than an authentic problem to be solved by initiatives that would help make their neighbourhoods safer.”

This time, rather than trying to conjure an issue from the subterranean depths, the Liberals are focusing on the item already at the top of the agenda for many voters. Indeed, the electorate may never have been as acutely aware of limits of the health system as it is after the pandemic. Shortages of staff and beds have led to blowouts in waiting times, with vulnerable patients sleeping in tents and on benches. The Australian Medical Association says that less than two-thirds of emergency department patients were seen within four hours in 2020–21, while the ABC reported that as many as 800 emergency patients went home each day without having been seen.

Delays in answering triple-zero calls, meanwhile, have been associated with a dozen deaths over the past twelve months, and a review of the authority running the service found it not fit-for-purpose. No wonder Guy told his party, “It’s the healthcare system, stupid!” It is indeed an unavoidable and irresistible target for the opposition.

What’s more, campaigning on health has delivered dividends for other oppositions around the country this year. SA opposition leader Peter Malinauskas brought Labor into government in March following a campaign keenly focused on problems in healthcare, and particularly the state’s ambulance ramping crisis. And Anthony Albanese made it into the Lodge at least partly thanks to promises to make it easier to go to the doctor and to get prescription medication. Health is on voters’ minds; health is what is swaying them away from incumbents.

The problem for Matthew Guy is this: campaigning on health as a Labor leader is one thing; doing the same as a Liberal is another. Polls stretching back a long way show voters in Australia tend to trust Labor to handle the healthcare system far more than they do the Liberals. Labor “owns” health just as the Coalition “owns” crime and economic management.

This concept of issue ownership sprang up first in the work of the American political scientist John Petrocik. According to his account, the association of a party with issue competence isn’t necessarily based on actual performance. Voters don’t carefully follow what a party is doing or what a candidate has delivered (or failed to deliver). Rather, the reputation builds up over time and become ingrained at an almost subconscious level — which is what makes it incredibly hard to challenge. Labor owns health almost no matter how bad the health system gets on its watch.

Or, take another example, the Coalition and migration. According to this “sticky” theory of issue ownership, even if Labor adopts the same policies as its opponent, voters will still see the Coalition as more credible and effective at managing migration. These perceptions are entrenched; they are not continuously re-evaluated as new information comes in. A change in issue ownership doesn’t come easily, according to Petrocik. Only an especially acute crisis shakes voters out of their assumptions about who owns what.

Such a notion has profound implications for campaign strategies. It pushes parties to campaign about their issues and to ignore their opponents’ issues. To take the alternative course — to try to show voters why you would do better in your opponent’s areas of strength — is to fall into a kind of strategic trap.

A classic case, the 1994 governor’s race for California, has been described by American scholar Adam Simon. Simon shows how the Democratic frontrunner in that campaign, Kathleen Brown, blew a twenty-point lead against incumbent Republican Pete Wilson. Wilson was unpopular because of the dire economic situation he had presided over in California. But although Brown was the preferred candidate for economic management among voters, he succeeded in moving the focus of the campaign towards illegal immigration, in part by pairing it with his controversial Proposition 187 vote to cut off most social services to undocumented migrants.

Brown’s mistake was to follow Wilson into that territory. She stopped campaigning on the economy and education, started critiquing Wilson’s Proposition and launched her own immigration policies, courting endorsements from immigration-focused groups and explaining to voters that she was tougher than she looked on the question. It was a disaster: Wilson, having polled just 29 per cent support a year earlier, won the election by a devastating fourteen points. Had Brown simply ignored Wilson’s campaign and stuck with the economy, so the theory goes, Wilson would have been toast.

Matthew Guy could well be leading the Liberals into a similar trap. Despite the real problems in the health system, it seems entirely plausible that Labor is still more trusted by most voters on health than are the Liberals. If that’s the case, every time Guy elevates the issue he is sending undecided voters back Labor rather than to the Liberals. Every attack, every promise for more health funding, is another reminder to vote Labor — or so the theory goes.

This is not a sure thing of course — Guy could be making a dent in Labor’s ownership of health. Maybe Victoria’s crisis is acute enough for voters to shake off their assumptions and shift — we shall have to see. But the theory suggests this is close to impossible to do.

Whatever your partisan preferences, there’s something grim about Guy’s campaign on health backfiring in this way. It would seem to encourage more “African gangs”–style campaigning — the strategy of changing the topic, avoiding opponents’ issues, avoiding real dialogue. The Liberals are showing a certain admirable bravery by engaging in real debate about the issue at the top of voters’ agenda rather than trying to direct attention elsewhere. We would be better served, as an electorate, if we had more debates like this. •