What would Leonard Cohen make of the use of “Hallelujah” as a community anthem, asks Andrew Ford 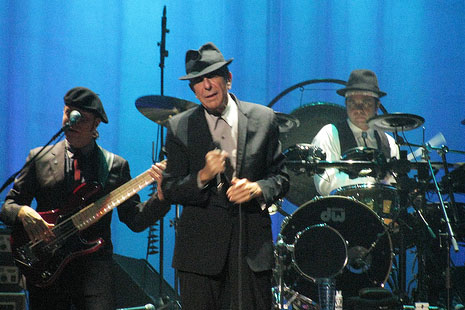 THE reason that “all art constantly aspires to the condition of music,” as the nineteenth-century essayist Walter Pater put it, is that it is the medium in which content and form are inseparable. Music is not about something else. Even if it’s called La mer or Kakadu, a piece of music consists of pitches and durations and dynamics that relate only to each other. A composer does not “translate” (to use W.H. Auden’s word); music is the thing itself, “pure contraption.”

Now of course this doesn’t rule out interpretation by listeners. Music may not be a blank screen for the projection of our meanings and feelings, but it does little to resist them. As a composer, I have no problem with this. Over the years, audience members have revealed all sorts of reactions to my music – including some very precise images – that I had never previously considered. And just because I wasn’t thinking about “wet sheep” (to take a real example) when I wrote a piece, doesn’t invalidate the listener’s reaction. Since I had nothing in mind besides the invention and organisation of abstract sounds, images of soggy ovines are as good a response as any.

But as soon as you add words, things get more complex. Take Leonard Cohen’s now ubiquitous “Hallelujah,” a song about a powerful sexual obsession ennobled with Old Testament references to King David and Bathsheba. In 2009, the song was chosen to be sung at the memorial service for victims of the Black Saturday bushfires. Who knows why? Perhaps because its one-word chorus sits in the context of a song that includes the line “Maybe there’s a god above” it offered reassurance amidst doubt. Still, to have that response you would have to ignore most of the other words, and particularly those about spying a naked woman bathing on the roof, being tied “to a kitchen chair” and the verse about orgasm. Could they really have thought of nothing more appropriate to sing?

John Lennon’s song “Imagine” is a related example of misinterpretation, partly because of the music. It is a song promoting the idea that the world might “live as one,” and as such was banned from airplay by the BBC during the first Gulf war, as though wishing for peace might have been insensitive or unhelpful. It is also a song about the simple pleasures of atheism (“Imagine there’s no heaven – / It’s easy if you try”), on which grounds it was removed from the annual concert of a Church of England primary school a few years back. The school principal felt it was inappropriate. No misinterpretation there: if you’re trying to inculcate Christianity in small children, it would indeed be unhelpful to have them sing “Imagine.”

But in the minds of some who hear the gentle music with its hypnotic chord changes and the word “heaven,” “Imagine” is occasionally mistaken for a religious song. And it’s only a small step from misunderstanding to rewriting, so that it is not uncommon to hear the song sung in the United States as “Imagine there’s a heaven,” the line “And no religion too” changed to “And one religion too,” which is better grammatically I have to admit, but certainly misrepresents Lennon’s intentions.

I have no idea what Cohen thinks of the use of “Hallelujah” as a community anthem (I’m guessing he’s perplexed), but I know Lennon would have had nothing but withering disdain for those who turn “Imagine” into agitprop for Jesus.

I recently heard about a particularly amusing instance of misinterpretation involving Jan Brown’s Icarus sculpture in Canberra. In Greek mythology, the inventor Daedalus constructed wings from feathers and wax so that he and his son, Icarus, could escape their imprisonment on the island of Crete. Failing to heed his father’s advice to take “the middle way,” Icarus flew too near the sun. The heat melted the wax, the wings disintegrated and the boy plunged to his death in the Aegean.

Brown’s sculpture, which was made under the patronage of former chief minister Jon Stanhope, and stands at Petrie Plaza in Civic, consists of four figures depicting Icarus rising, but not his fall. That must be imagined.

You might think the seat of federal government an appropriate place for a warning about the dangers of “vaulting ambition,” but that is not how the work is being read by many Canberrans. My friend, Barbara Blackman, who has a longstanding interest in the subject of Icarus and who owns Brown’s original maquettes, tells me that the sculpted figures are increasingly seen as emblematic of Canberra rising. Perhaps somebody needs to commission a fifth figure.

Meanwhile, I am beginning work on my String Quartet No 3, which will be about nothing but itself, whatever its audiences might imagine. At least the title should resist misinterpretation. •