Peter Sculthorpe, a composer in Australia

Andrew Ford reflects on the man and his music 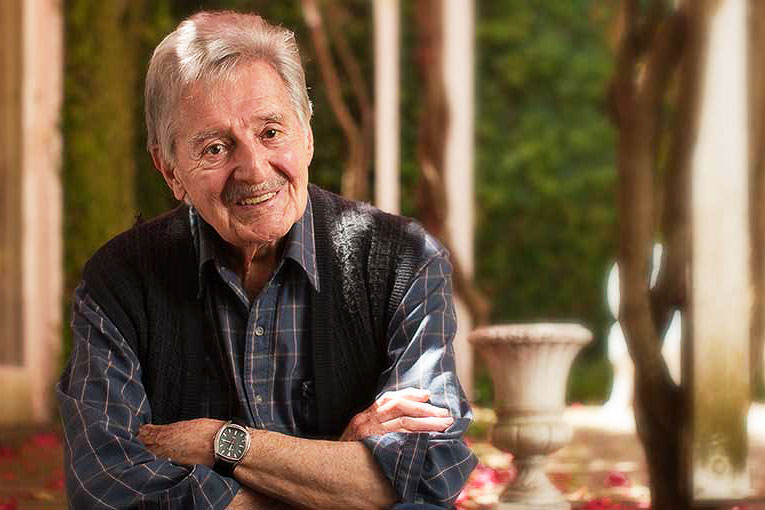 Peter Sculthorpe’s friends had been expecting word of his death for some weeks. He had been in hospital for much of the year, and close to the end more than once. Still, when word finally came last Friday, there was an immediate feeling of absence. People that day spoke of a hole, even a chasm in our musical life. They were not exaggerating.

For fifty years, Sculthorpe wasn’t simply at the heart of Australian music, he was its heart. From the mid 1960s, along with Richard Meale and Nigel Butterley, he had been part of a modernist triumvirate in the concert hall. Meale’s music brought intellectual rigour and cosmopolitan brilliance, Butterley’s a sort of private ecstasy, but it was Sculthorpe’s pieces, painted from the start in broader brushstrokes, that captured the public imagination. In orchestral works such as the Sun Music series (1965–69), Mangrove (1979), Earth Cry (1986), Kakadu (1988) and Memento mori (1993), Sculthorpe addressed a wide audience, communicating with them in a direct manner similar to the way in which Aaron Copland had addressed American audiences. However, there was a difference. At the height of Roosevelt’s New Deal, Copland had deliberately set out to find an American style, assembling it from hoedowns and hymns. Sculthorpe, at least initially, was far less deliberate in his methods.

Peter Sculthorpe was, above all, an instinctive composer and an extremely individual one, his music always deeply personal. His childhood was solitary, in that he was happiest with his own thoughts – perhaps that is true of all composers – and accordingly he made his own musical technique, finding confirmation in the work of composers who had gone before him. His boyhood discovery of whole-tone scales, for instance, readied him for the influence of Debussy, whose music is full of those scales. He was also drawn, early on, to melodic lines that moved at a different rate from their harmonies, and particularly to pedal points – bass notes that continue to sound even as the harmony above them shifts. He recognised them in Schoenberg’s Verklärte Nacht and Mahler’s Das Lied von der Erde, which he heard on ABC radio. One is seldom influenced by things to which one is not already receptive, and so Sculthorpe’s embrace of those composers – and, later, Japanese court music and Balinese gamelan, and later still, Aboriginal music – was made possible by his musical personality; it did not form it.

Of course, when you are a major public figure, as Sculthorpe was, the public feels it knows you and, to some extent, owns you. Your life and work are rolled into one, and both are mythologised. For that to happen, the story must first be simplified, and in Sculthorpe’s case this came down to a belief that his music was somehow drawn from the Australian landscape, extracted, as it were, from the very rocks.

You can see how this happened. First, there were Sculthorpe’s titles, which often seemed to tie his music to a particular place. Then there was the character of his music, which generally unfolded slowly, like the eye travelling across a wide expanse of Outback. His melodic lines had rather narrow ranges, keeping close to the earth, resembling the undulating landscape itself. And those pedal points: were they not really drones, even didgeridoos? Perhaps, if Sculthorpe had been more of a Copland, he might have thought in such terms. But Sculthorpe did not draw on Australia so much as Australia drew on him. He gave us music that was echt-Sculthorpe, and we heard our land in its notes.

Peter’s personality was in his music, but also his music was in his personality. There was even something about the way he spoke – a measured pace, a sonorous delivery – that seemed an extension of the slow unfolding of melody in a piece such as Earth Cry. That said, the man and the music were not the same. Perhaps we could say that the music contained Sculthorpe’s essence, but the composer himself – like the rest of us – was a tangle of contradictions. For example, although he had apparently led Australian music away from its colonial past by accepting influences from Asia and Indigenous Australia, he was quite the Anglophile. I was astonished to discover, late one night in 1999 over a little too much to drink, that this musical “voice of Australia” was actually a monarchist.

At the end of the twentieth century, Sculthorpe began to use the didgeridoo. He included it, most memorably, in the Requiem he composed for the 2004 Adelaide Festival, but he also added it to a number of his earlier pieces. Those who had always believed they heard the didgeridoo in his use of pedal points now heard the real thing, as the instrument suddenly turned up in Mangrove, Earth Cry and Kakadu, as well as a number of the later string quartets. These were among the composer’s best-loved works, and some of Sculthorpe’s colleagues were less than charitable in their belief that he was being tokenistic.

But you only had to listen to the music to know this was not true. The extraordinary thing about the collaboration between Sculthorpe and William Barton was not just that the latter seemed instinctively to know what was needed – there were never any written parts for the didgeridoo – but also that these works accepted his contribution so readily. It never sounded tacked on; on the contrary, those pedal points accommodated Barton almost as though the works had, hitherto, been incomplete and were only now properly finished. These new versions cemented the music’s reputation as the sound of the land and Sculthorpe’s as our national composer. He was happy to accept this role and the adulation that came with it. He loved being loved.

At the Sydney Symphony Orchestra’s concerts for his eightieth birthday in 2009, Peter was a little too frail to get out of the audience to take a bow. (At the Opera House concert hall, you have to leave your seat, leave the auditorium and run down several flights of steps in order to emerge on stage with the orchestra.) It was put to Peter that he might prefer just to stay where he was sitting and stand to acknowledge the applause. But instead, he remained backstage both evenings, thus missing the actual performances, before walking on at the end to receive the cheers of the young Meet-the-Music crowd. I was backstage with him on those nights and he was clearly very tired, but both times I saw him return from the stage restored by the applause and glowing with happiness.

In the end, if people believe that Sculthorpe’s music symbolises Australia, then it does: there can be no greater achievement for any artist than to produce a body of work that people feel to be their own. Peter himself probably came to believe it. But whether or not his work reflects our landscape, it was undeniably a shaping force of our musical landscape. When Sculthorpe came along, Australian music changed; now that he’s gone, it will change again. For the time being, though, there’s just that hole, that chasm. Fortunately, we have his music to help fill it. •

Composer Andrew Ford presents The Music Show at 10 am and 10 pm each Saturday on ABC Radio National. His latest book is Try Whistling This: Writings about Music. His 1999 interview with Peter Sculthorpe is available as a podcast.