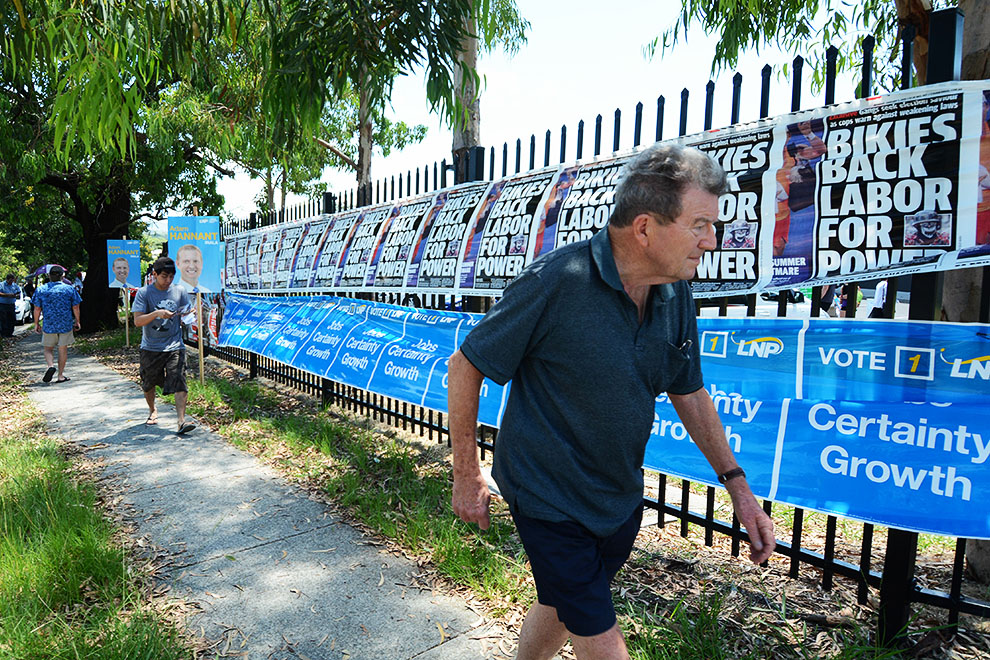 Three years ago next month, Queensland voters ended fourteen years of state Labor rule with an almighty thump. The 13.7 per cent two-party-preferred swing to the Campbell Newman–led Liberal National Party left premier Anna Bligh and her party with a record low 8 per cent of seats in the state’s single chamber. It was a breathtaking result, at the extreme end of some pretty wild expectations.

But last weekend it was reversed. On current counting, the swing, this time to Labor, again rounds out to 14 (or at least 13) per cent. The 51-ish per cent vote isn’t enough to reinstall a comfortable Labor majority, but it has delivered a probable Labor government under Annastacia Palaszczuk, either in its own right or relying on minor parties and independents.

This result caught most observers (including me), and certainly the betting markets, who at close of betting put the odds at around 15 per cent, by surprise. (Not Professor Brian Costar, who hails from the state and recently assessed a Labor win as a distinct possibility.)

Why did it come as a shock?

One reason is dry and technical: the published opinion polls didn’t tell us to expect it. They have been misleading us. For how long we don’t know, but the pollsters underestimated the extent of preference flows to Labor, by quite a lot, and this made a substantial difference to their published two-party-preferred numbers.

Most political polling outfits ask respondents who will get their number 1 vote, and then attempt to estimate two-party-preferred figures from those results. When preferences are optional and the total major-party vote share low, as in Queensland recently, this is challenging. Electors can be influenced by how-to-vote cards, and the exhaustion rate (when a minor party or independent vote doesn’t make it, in preferences, to either major party) is not knowable.

Take the final Galaxy poll of the campaign, collected over Tuesday to Thursday of the final week and published in the Courier-Mail on Saturday. It measured LNP support at 41 per cent, with Labor on 37, Greens 8, Palmer United Party 4 and Katter’s Australian Party 2.

At this point in counting, the actual election results are 41.5, 37.8, 8.2, 1.8 and 4.9 respectively. So Galaxy’s reading was very close to the result, though they understated both major parties’ support a smidgen, and Labor’s by a bit more than the LNP’s. (We don’t know what the unrounded Galaxy numbers were, of course.)

But Galaxy estimated, from its numbers, that Labor’s two-party-preferred vote would be 48 per cent, yet it seems to have come in at 50 or 51 per cent. Like Newspoll and most of the others, it estimated two-party-preferred using preference flows at the last election, in 2012. And preferences favoured Labor a lot more this time.

At the 2012 election, pollsters, using 2009 flows, erred in the other direction, but for such a one-sided election it didn’t matter as much. When the result hovers around 50–50, a few per cent makes all the difference. (The alternative to pollsters estimating preferences is asking respondents which side will get their eventual preferences. This has also proved problematic.)

When the votes are analysed it will be particularly interesting to see what proportion of Palmer United Party voters simply voted 1, and where the preferences of those who numbered other boxes went. PUP wasn’t around for the last state election, and pollsters may have used its federal 2013 flows (with an allowance for exhaustion) in their calculations.

But at the federal election PUP issued how-to-vote cards recommending the Coalition ahead of Labor in every electorate, while this time it favoured neither side. Wrongly assuming its preferences would favour the LNP could account for a per cent or so of the aggregate preference gap. (Is it possible that Newman’s “just vote one” message to third-party voters, designed to minimise Labor’s preference advantage, resonated most with those who would otherwise have preferenced the LNP? Just a thought; we’ll never know the answer.)

The upshot is that the opinion polls, while perhaps hinting the election might be close, didn’t warn us that a cliffhanger, or a Labor win, was on the way. (This was the opposite of Victoria in November, where the Coalition would have had to defy the opinion polls to survive.) If you had added 2 or 3 per cent to Labor support in the published Queensland surveys over the last year or two, general expectations of Saturday’s outcome would have been very different.

Still, even if the final polls had put Labor on 50 or 51 per cent, some (okay, me) would have been sceptical about the possibility of a change of government. From such a massive victory last time, it seemed unlikely. Governments don’t lose after one term, do they?

It’s true that a Coalition one did in Victoria two months ago, but that’s a Labor state, having returned Labor two-party-preferred majorities at eleven of the last thirteen federal elections – even at the big 1996 and 2013 Labor losses.

Queensland works the other way. It is fundamentally conservative, only rarely voting Labor federally. It last gave the national party wins in 2007, 1990, 1961 and before that 1943.

So why was the LNP’s record majority wiped out on Saturday?

Had the swing to Labor “only” been the 11 per cent the opinion polls predicted, some explanation would still be needed. A correction after such a big win last time was inevitable, but of that size?

Some of the credit must go to the government’s actions over the last three years. As Brisbane lord mayor, Newman had a reputation as a moderate, a centrist. As premier he was something else, rather reminiscent of the Bjelke-Petersen era: intolerant of dissent, combative and hamfisted. And all that fiscal slashing and burning.

But this was not the first new government to go back on its election promises, to deliver bitter medicine and blame it on the profligacy of the just-defeated rabble. Most seem to do okay.

I believe the most important single factor in the result was the 2013 federal election outcome. If the Rudd Labor government had somehow managed to hold on seventeen months ago, conservatives would still be governing in Queensland (and, for that matter, in Victoria, and they would be in power in South Australia).

Recent decades have seen clear, discernible state–federal electoral dynamics. The election of the Howard government in 1996 was followed by the demise of almost wall-to-wall Coalition governments and huge state and territory Labor re-elections. Federal Labor’s return to office eleven and a half years later was followed by unexpectedly poor performances by state and federal Labor, beginning in Western Australia and the Northern Territory in 2008.

So the absence of a Labor federal government and the presence of a Coalition one is chiefly responsible for the big turnaround of state parties’ fortunes. Following the September 2013 election, opinion polls in every state moved in Labor’s favour.

The unpopularity of those respective governments is icing on this cake. Julia Gillard was much disliked, particularly in Queensland, in March 2012, and now Tony Abbott’s toxicity levels are high.

The broad parameters of electoral contests are out of the players’ hands. It is the height of silliness to declare the winner of every electoral contest the superior campaigner, which doesn’t stop many commentators doing just that.

But even adjusting for rubbery preferences, the Queensland result for Labor was at the higher end of opinion polling over the last year. This contrasts, for example, with Victoria last November, when the 52–48 election outcome was closer than nearly all opinion polls over the previous twelve months.

In the southern state, the tales of brilliant Labor campaigning in the final week didn’t quite gel with the narrowing of the opinion polls in that period. But in Queensland it is reasonable to believe Labor did something right (and/or the LNP something wrong) in January.

And given the closeness of the Queensland outcome, many things might have made the difference between success and failure. Newman’s desperate warning that electorates that didn’t vote LNP would miss out on largesse, tick. His advising journalists to Google for evidence of bikie links to Labor, tick.

The general expectation of an LNP victory, facilitating a protest vote. The dire levels of Abbott’s unpopularity, with the most recent contribution, his Prince Philip fiasco. Privatisation. Tick, tick, tick.

When the result was so close, there are many “what if?”s. (One in the opposite direction might be: would Palaszczuk be preparing to be sworn in as majority Labor leader if not for her last-minute GST gaffe?)

Anyway, next month it’s New South Wales’s turn. It would take an even more serious opinion poll adjustment to produce an upset there, but all the same 31 January would have provoked some jitters in Mike Baird’s Coalition government.

And in Canberra, as Abbott’s leadership teeters, colleagues from his home state would be watching particularly closely. •

Victoria’s upper house has a small but potentially influential contingent of micro-party MPs, writes Paul Rodan. Like its federal counterpart, the state government is caught between the need to keep this group on side and calls for changes to the voting system 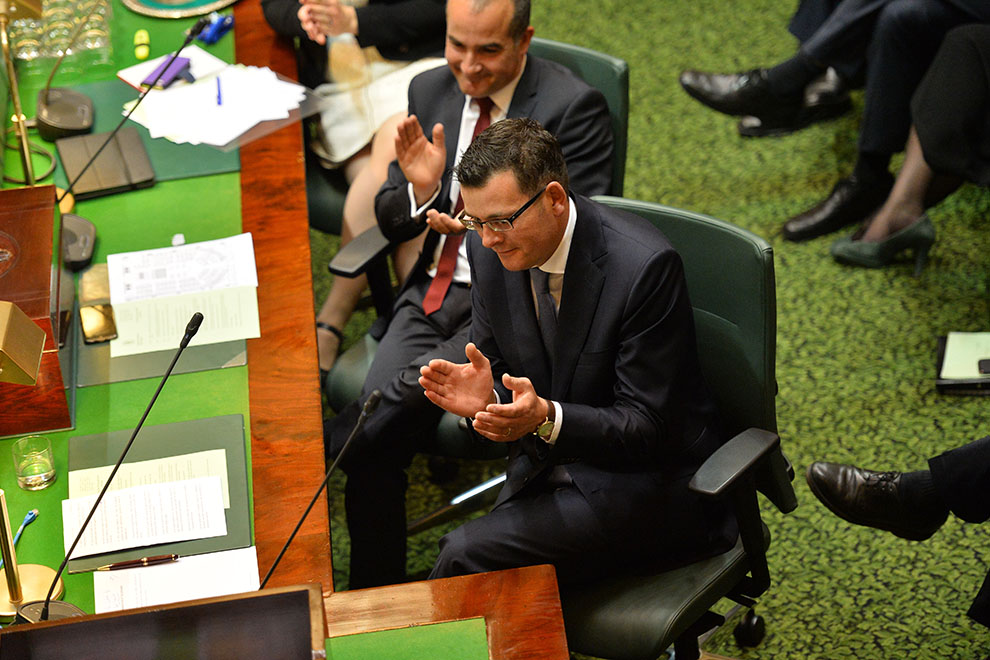