Rhiannon Giddens and the folk arts 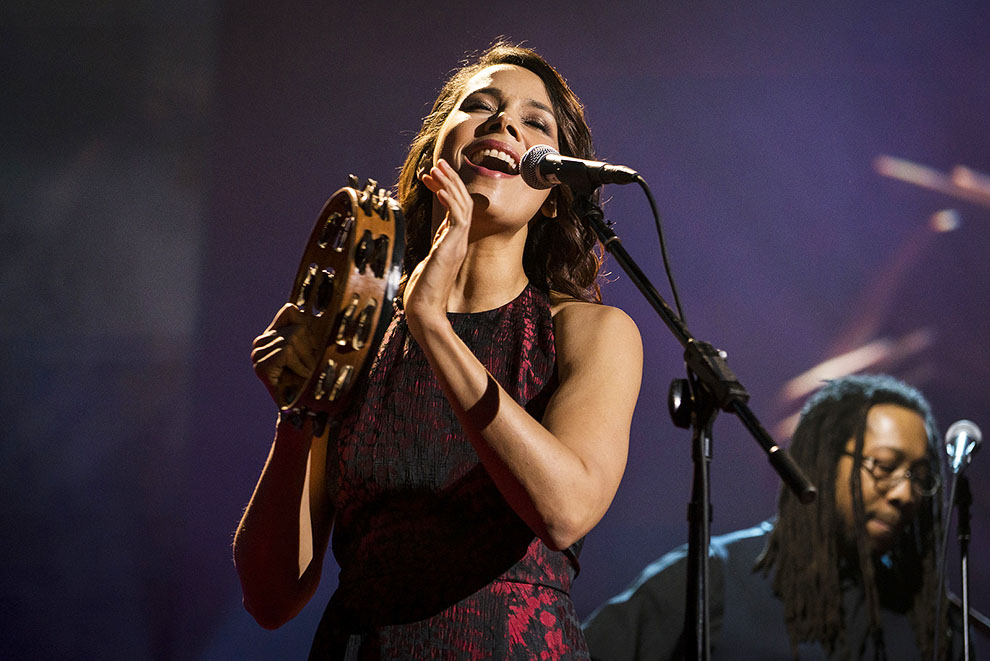 Were she not so distinctive, Rhiannon Giddens might be thought part of a movement in today’s music. It’s a generation of musicians who are fiercely intelligent and articulate, technically virtuosic and musically eclectic. Chris Thile would make the list; so would Sam Amidon, who was in Australia recently to work with the Australian Chamber Orchestra. Another thing they share is an attitude to music of the past, particularly folk music of all sorts.

Folk music was once regarded as the almost comic poor relation of “serious” composed music on the one hand, and commercial pop on the other. But musicians like Giddens, who came to prominence as the lead singer (and fiddle and banjo player) of “old-timey” band the Carolina Chocolate Drops, have made it the bedrock of their art. On her first solo album, Tomorrow Will Be My Turn (2014), Giddens sings songs by Nina Simone, Dolly Parton and gospel singer Sister Rosetta Tharpe, but the first track on the disc is “Last Kind Words Blues,” a powerfully peculiar song by Geeshie Wiley, an African-American singer about whom little is known – and almost nothing for sure.

It’s one of the songs discussed by Greil Marcus in his book Three Songs, Three Singers, Three Nations, and there’s plenty in the song to talk about. It’s an example of what Marcus has called the music of “old, weird America,” a term Giddens has her doubts about.

“I like that term and I hate that term,” she tells me. “I know why he says it and I know what he means. It’s all the stuff that doesn’t make it into the sanitised view of what American music is. But I don’t think it’s weird. It’s wildly interesting and so much is uncharacterisable. Maybe he means weird in the old sense – supernatural. That I can get behind.” On her latest album, Freedom Highway, there’s a supernatural element in a song Giddens wrote with her producer, Dirk Powell, “We Could Fly.” It refers to the belief that back in Africa, the ancestors of American slaves were so free they could fly in the air.

Freedom Highway represents a different sort of tradition, that of African-American resistance, running from what Giddens calls “the time of bondage” to the Black Lives Matter movement. Its emotional focus is a song called “At the Purchaser’s Option,” inspired by a nineteenth-century newspaper advertisement, reprinted in the booklet accompanying the album. It reads as follows:

For sale, A remarkable smart healthy Negro Wench, About 22 years of age; used to both house work and farming, and sold for no fault but for want of emply [sic]. She has a child of about 9 months old, which will be at the purchaser’s option.

“I was reading a lot about the civil war,” Giddens explains, “the slavery era, and I saw this advertisement and it just killed me. You know, I’ve got two kids and I assume that when I wake up each day they’re still going to be mine; it’s an inalienable right. But the fact that this woman had no control over that or her body or her work or anything: how do you live through that? How do you make a life not even knowing if your basic family unit is going to stay together? So that’s where the chorus came from: ‘You can take my body, you can take my bones / You can take my blood, but not my soul.’

“Women, men, children are still being trafficked today, they have their passports taken from them, they have no agency. Part of the job of the folk arts is to comment not only about what went on, but what still goes on. That’s why I didn’t put any markers in that song that would tie it to the antebellum South or the plantations: this is a woman who is in a position like so many people even now. It’s not just an American story.”

For Giddens, the “folk arts” include rap, and her nephew, Justin Harrington, contributes his own voice and words to “Better Get It Right the First Time,” a song about a mother’s fears for her son in a time of racial profiling.

The civil rights movement of the 1960s is another strand on the album – you might say it is the connecting strand. Richard Fariña’s “Birmingham Sunday,” made famous by Joan Baez, is a quiet, respectful (and therefore devastating) song about the Ku Klux Klan’s bombing of a Baptist church in Birmingham, Alabama, in 1963, and the death of four girls. But the Staple Singers’ “Freedom Highway,” which lends the album its title, seems oddly connected to the present.

“The whole wide world is wonderin’ / What’s wrong with the United States,” sang Pops Staples in 1965, and it’s a question many are asking again. But while Giddens’s album might seem like a response to the current incumbent of the White House, the album was already in the can at the time of the presidential election.

“I started some of these songs four or five years ago,” Giddens explains. “And it’s a little distressing that the album seems so timely. We finished it right before the election and it had a different title. It was originally called ‘At the Purchaser’s Option,’ but we realised that with what was coming we were going to need some hope. ‘Freedom Highway’ was already on the album, and we changed the title to that the day after the election. Now I can’t imagine it being called anything else.” •

Rhiannon Giddens spoke to Andrew Ford and sang two of the songs mentioned in this article on Saturday’s episode of The Music Show on Radio National.