Saving Wagner from himself 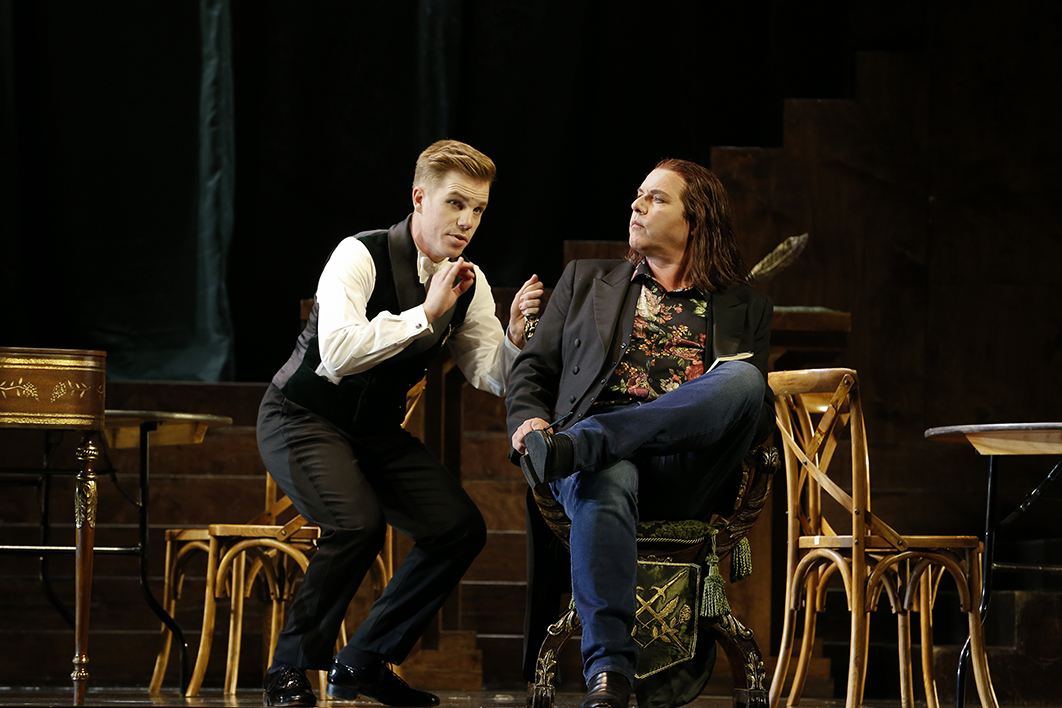 Die Meistersinger von Nürnberg, performed this month in Melbourne by Opera Australia, is Wagner’s most accessible opera. Featuring no Teutonic gods, no holy grails, giants or ghostly wanderers, it is about ordinary citizens living their lives in sixteenth-century Nuremberg. But the opera has a dark side that every production must deal with. The fact that it was a favourite of the Nazis, and that its music was used to support the war effort of the Third Reich, isn’t Wagner’s fault, of course. But Beckmesser, the snivelling, reviled villain of the piece, was probably intended by Wagner, well known for his anti-Semitism, as a portrait of a pretentious Jew.

Directors can deal with the Beckmesser problem by ensuring that he is not an anti-Semitic caricature and that he retains his dignity despite his downfall. But they are struggling against the logic of the plot. Beckmesser is an object of ridicule and we are not supposed to feel sorry for him when he is humiliated and rejected. His longing for love makes him too much of a real person to be played as a comic buffoon. We can only distance ourselves from him by supposing that he belongs to a kind that deserves to be the object of scorn. Whether this kind is Jewish or something else, his treatment hits a sour note in an opera that is supposed to be celebrating communal solidarity.

It is what makes this community solid that presents a problem for contemporary productions. As the opera is wrapping itself up in a final expression of joy in a happy outcome, Hans Sachs, who is supposed to represent the best instincts of the community, launches into a defence of German culture, which is threatened, he says, by foreign powers and “foreign mists with foreign vanities.” This message is echoed in a final chorus that could easily serve as a hymn for the right-wing Alternative for Germany party. And it is well known that Wagner regarded Jews as among the foreigners that German art had to be protected from.

The Opera Australia production, directed by Kasper Holten, has a radical solution to the problems posed by the chauvinism embedded in the Meistersinger. Rather than seducing the audience with the triumphalism of the final chorus, it leaves them with a feeling of discomfort. At the same time, it stabs the opera’s romantic comedy in the back.

The romance of the opera follows a conventional storyline. Like the kings of fairytales, Pogner, a great man of the city, offers his daughter Eva and his wealth to the man who can win a contest. A young knight, Walther, a stranger to the city, falls in love with Eva and is determined to win her despite his underdog status. After setbacks and difficulties, he succeeds in defeating his rival and winning Eva’s hand and the acceptance of the community. What is unconventional about this story is that those who run the contest are not noblemen but burghers — tradesmen who cobble, sew, bake and forge, but also belong to a guild dedicated to writing poetry and putting it to music. The trial is not by combat but by song: competitors must present their own compositions for the judgement of the mastersingers and the people of the city.

The plight of the lovers provides a plot for the opera. But its centre of gravity is elsewhere. It is the city of Nuremberg itself — its culture and its people, with their exuberance and occasional madness — that is the heart of the drama. The apprentices tease each other and complain about their masters. Guild members meet and argue in a way familiar to anyone who must attend meetings. A festival gets out of hand and turns into a drunken, riotous night. From time to time the night watchman crosses the stage with his lantern and reminds residents to watch their candles and fires and to praise God. Presenting civic life alongside romantic yearnings takes time — with intervals, the opera is all of six hours long — but in this lively, well-staged production the proceedings never became tedious.

The other focus of this musical drama is music itself: the rules it should follow, what counts as a good or bad song, who should be the judge. Walther scorns the mastersingers’ rule-bound approach, but to win the contest he has to learn how to discipline his romantic outpourings into a form that others can appreciate. The intervention of this outsider works to the benefit of all: he learns how to be a mastersinger and the art of the mastersingers is invigorated by his innovations. Hans Sachs sums this up before he segues into the nationalist rant that Wagner appends to his work.

There is an obvious dissonance between this diatribe and the real lesson of the opera: that members of a community can profit from the perspectives of outsiders if they welcome them into their midst. There is also a dissonance between Wagner’s celebration of German identity and the loyalty that moves the citizens of Nuremberg. Through most of its existence Nuremberg was a free city in a Germany that consisted of many states and principalities. Trade made it cosmopolitan and it later became a centre for the German Enlightenment. In the opera, the burghers express pride in their city and the culture it has created, and work for its greater glory. They no doubt regard themselves as Germans, but advancing the German nation is not their priority.

The conflict between that theme and the nationalistic message of its coda may be why Holten decided to inject dissonance into the final scene. After his triumph, Walther is persuaded by Sachs to accept membership of the mastersingers in what is supposed to be a happy ending for the romantic story as well for as the townspeople. In this production, Eva mutely protests. Her gestures clearly indicate that she doesn’t want Walther’s induction to happen. She tries in vain to lead him away. Perhaps she loved him as a rebel and is disappointed that he is now turning into a conformist. Perhaps she doesn’t want him to be part of the patriarchal guild that regarded her as goods to be used for their own purposes. As the chorus sings, she makes a detour towards Beckmesser, an abject, half-naked figure sprawled out on a bench, makes a helpless gesture, walks past Walther, who is no longer paying attention to her, and then climbs up the stairs at the back of the stage and goes out the door. So much for the romance.

Not everyone in the audience liked this innovation. Michael Shmith, writing in Australian Book Review, complains that it was distracting and misguided, sullying Wagner’s intentions and most of what had gone before. To be sure, this ending was not what Wagner intended, and it undermines the fairytale romance that provides the plot. But it is an ingenious way of saving the opera from itself. •