Should Queensland go back to the future?

Campbell Newman’s premiership was an object lesson in the dangers of untrammelled power, writes Brian Costar. Queensland needs an upper house to keep governments out of trouble 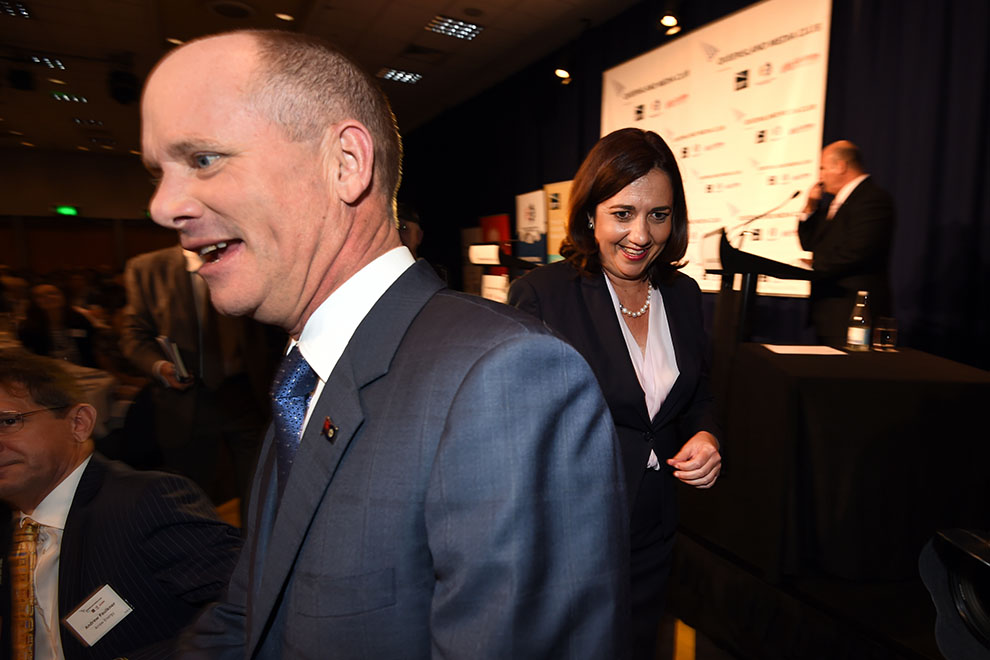 From polling day on 31 January until the swearing in of Annastacia Palaszczuk as Labor premier seventeen days later, Queenslanders were treated to the usual tired scaremongering about the evils of minority governments. On 11 February the Australian Financial Review confidently told its readers that “the prospect of three years of minority government would be enough to scupper business confidence in Queensland.” The following day, the Australian breathlessly reported that Queensland now rates at 123 points on the Political Monitor risk index, “a record for the index.” (The least “risky” state, New South Wales, is on 56.)

By this time it was clear that Labor had won forty-four of the Legislative Assembly’s eighty-nine seats and could rely on the support of independent MP Peter Wellington. Not only had Labor taken power, but the results are unlikely to be anywhere near as dire as the pundits had predicted. Given that all of Australia’s political jurisdictions – every state and territory and the nation as a whole – have experienced minority government over the past twenty years, this sort of panic peddling might have had its day.

Most of the minority governments during those two decades were stable and productive, and some provided a platform for the formation of successful majority administrations. Victorian premier Steve Bracks described his three years as a minority premier as “one of the best periods of government that I had.” Among the few that weren’t so successful was Rob Borbidge’s 1996–98 conservative coalition in Queensland, which stumbled along with the support of independent MP Liz Cunningham.

The instability of Australia’s best-known minority government, Julia Gillard’s, was the product of unresolved Labor leadership issues rather than the lack of a majority in the House of Representatives (or in the Senate). In fact, Gillard was notably successful in getting her legislation through the parliament, something that her majority successor has repeatedly failed to do.

In Queensland’s case, it might also be argued that its citizens actually benefit from minority government. Why? This is the only state without an upper house, which severely limits the avenues by which legislation can be reviewed and improved. Like the Spanish Inquisition, though, no one expects elections to produce minority administrations, so it might be a long wait before we have another government that has to negotiate rather than assert. Perhaps a more permanent constitutional arrangement is needed to improve accountability.

One heretical option would be to reintroduce a second chamber to the Queensland parliament. The idea was extensively canvassed at a conference less than a decade ago (its proceedings, including an excellent chapter by Colin A. Hughes, were published as Restraining Elective Dictatorship: The Upper House Solution?) and is worth reconsidering in light of the experience of the past three years.

Upper houses are not a panacea for achieving accountable government, of course. Evidence from Australia’s six bicameral legislatures is mixed – some have done it well but some haven’t – and even the most careful constitutional design can’t guarantee appropriate behaviour. Political parties will still tend to dominate. But Queensland’s record, especially under premiers Joh Bjelke-Petersen and Campbell Newman, suggest that a “unicameral” parliament starts with a disadvantage.

Before we consider what an extra chamber might look like, it’s useful to go back to the events that led to the abolition of Queensland’s upper house.

When Queensland was excised from New South Wales in 1859 it was a fully fledged colony with representative and responsible government. Members of the upper house of its parliament, the Legislative Council, were appointed by the governor-in-council for life. While its committees occasionally did useful accountability work, it was hostile to progressive legislation and obstructive of reforming governments.

The Ryan Labor government held an unsuccessful referendum to abolish the council in 1917. Five years later, the Theodore Labor administration controversially succeeded in legislating away the upper house. After a bungled attempt by a conservative government to reconstitute it in 1931, another Labor government amended the constitution in 1934 to entrench unicameralism. From that point on, an upper house could not be recreated except by referendum. No serious attempt has been made to restore the Legislative Council since then, and it is interesting that Tony Fitzgerald’s landmark 1989 report on corruption and government administration made no recommendation on the matter.

Anyone advocating for Queensland to abandon unicameralism has two large hurdles to clear: how to design the Legislative Council and how to convince a majority of the electorate to support the necessary referendum to create it. The nineteenth-century rationale for upper houses was simple: to defend property interests by stopping “radical” legislation, such as votes for women. In this century, the only defensible rationale is to enhance the accountability of the executive arm of government.

Any new chamber in Queensland would need to be large enough to discharge its functions effectively. Twenty-five members would be the bare minimum. Election would be by optional preferential proportional representation. If the state were to be divided into five regions electing five members each this would yield a quota of 16.6 per cent, which is on the high side (in an ordinary Senate election the quota is 14.3 per cent), but the alternative whole-of-state method would produce a very low quota of 3.8 per cent and enable people with little electoral support to win seats.

The council would need a very robust and independent committee system with the capacity to compel ministers to appear. Apart from a leader of government business, no ministers would sit in the council, but assembly ministers should be able to address it and answer questions. To provide an appropriate career path, the chairs of standing committees should receive ministerial salaries.

The council would have no authority over money bills but would have a capacity to delay legislation for six months to permit scrutiny from inside and outside parliament. It is imperative that members of the council would not undertake constituency work; their job is to advance the public interest, not the interests of individuals or interest groups. One way to achieve this is to allocate them parliamentary but not electorate offices.

Would either of the big parties be prepared to cede authority by reintroducing an upper house? Ironically, it would be in their own interests to have a restraining legislative hand to protect them against electorally damaging enthusiasms. When that restraint is absent – in a unicameral system or when a government controls both houses – the results can rebound.

Two quick examples illustrate the problem. When John Howard’s government obtained a Senate majority in 2005 it proved a poisoned chalice, opening the way for WorkChoices to pass through parliament. That bout of ideological enthusiasm cost him government in 2007. And there is also little doubt that Campbell Newman’s recent remarkable defeat was caused by a public backlash against his unrestrained style of aggressive leadership. When the state parliamentary Crime and Misconduct Committee was making things uncomfortable for the government-friendly acting chair of the Crime and Corruption Commission, for instance, the premier simply dissolved the committee.

Any referendum to reintroduce an upper house would need multi-partisan support. But an even bigger obstacle would be a cynical electorate reluctant to vote for more politicians. It might be possible to reduce the Legislative Assembly’s numbers to eighty-one as compensation, but any further reduction in the lower house would encounter regional resistance.

Apparently the independent Mr Wellington is keen on a bill of rights. But is that a sufficient reform agenda to secure greater executive accountability in Queensland? •

Brian Costar is Professor of Political Science at Swinburne University and taught Politics and History at the University of Queensland in the 1970s.