The composer as critic 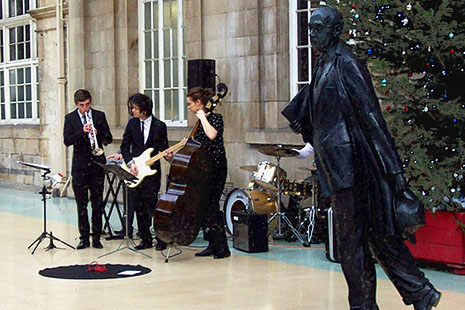 RECENTLY I read a bad review of my most recent book. The reviewer hated both the title and the cover and, above all, what he called my “affable prose” and “laboriously reasonable opinions.”

Specifically, the critic thought I’d been too “laboriously reasonable” about Keith Jarrett and Brett Dean. He wanted me to savage them with “pointier critical teeth” (his words).

I didn’t want to savage them at all. My article about Jarrett (written for Inside Story) was about the sources of his improvisatory style in American musical history, from ragtime to New England hymnody, and from bebop to Broadway. The reviewer, though, complained I was ignoring Jarrett’s bad behaviour on stage. I was.

Brett Dean’s music, he wrote, reaching for a handy cliché, “is part of the problem, not the solution.” I don’t know which problem this is (that’s the trouble with clichés), but the reviewer assured his readers that “many composers and commentators” felt the same way and that I should have acknowledged their voice. In a nutshell, he was saying I was wrong to be so enthusiastic about Jarrett and Dean.

This is precisely the approach to criticism I try to resist, not always successfully. It comes down to personal dislikes.

It seems to me that whether or not I dislike a piece of music can be of no possible interest to you. Similarly I don’t expect you to care how I feel about anchovies, not unless you’re making me a pizza. Even then, my liking or disliking of anchovies won’t invalidate your own taste.

But is it possible to keep personal taste out of one’s critical writing? It’s hard, certainly.

My book got up this reviewer’s nose. What was he to do? Well, for one thing, he might have followed W.H. Auden’s advice and elected not to review it in the first place, because, as Auden said, you can’t critique “a bad book without showing off.”

Here’s the full quote, from The Dyer’s Hand:

If, when a reviewer whose taste I trust condemns a book, I feel a certain relief, this is only because so many books are published that it is a relief to think – “Well, here, at least, is one I do not have to bother about.” But had he kept silent, the effect would have been the same.

Attacking bad books is not only a waste of time but also bad for the character. If I find a book really bad, the only interest I can derive from writing about it has to come from myself, from such display of intelligence, wit and malice as I can contrive. One cannot review a bad book without showing off.

Sometimes one has agreed to write about a book or a recording before one has formed an opinion, though, and sometimes one can’t reasonably withdraw. What’s to be done?

Sticking with English poets, there’s the example of Philip Larkin, who, for a decade, from 1961, wrote short pieces about new jazz LPs in the Daily Telegraph. Larkin, it later transpired, was a master at keeping his personal taste out of his reviews. And we know this because eventually, when the reviews were collected in a single volume called All What Jazz, he told us.

The introduction to the book makes entertaining reading. Larkin is self-deprecating about his limitations. He is passionate about early jazz – about Louis Armstrong, Bix Beiderbecke and Sidney Bechet (he wrote a wonderful poem about Bechet) – but repelled by modern jazz, and especially Charlie Parker. This isn’t the moment to rehearse Larkin’s objections, suffice it to say that he hated all modernism and that the three Ps – Parker, Pound and Picasso – were his bogeymen.

The introduction to All What Jazz has become well-known. If you Google “Larkin and jazz,” you will read about Thelonious Monk’s “elephant-dance piano style, with its gawky intervals and absence of swing… made doubly tedious by his limited repertoire.” That’s from the introduction. But read the actual reviews, from which Larkin successfully put away his own preferences, and you find him writing rather eloquently about Monk. He might have disliked the music, but he understood what was going on: after all, even “gawky intervals” is rather good. And Monk doesn’t swing.

I suppose you could argue that Larkin was being dishonest in not telling us – at least at first – what he really thought. But he explained that he was using his limited space to recommend rather than dismiss. And I suppose that’s what I try to do.

My sole reason for writing and broadcasting about music – apart from paying some bills – is to encourage others to listen. I’ve always felt that the best writing about music sends us straight back to the music to listen again. In fact I can’t think of any other good reason to write about music in the first place.

As a composer, I want to live in a world of good listeners, and so my motives as a critic are not exactly altruistic. I hope that through my enthusiasm for a piece or a composer, I can encourage people to listen harder and better, and so I try to leave the carping to others.

But apart from anything else, I seldom learn much about music from negative criticism; mostly I just learn about the critic. •

Composer Andrew Ford presents The Music Show at 10 am and 10 pm each Saturday on ABC Radio National. His latest book is Try Whistling This: Writings About Music. This article is based on a lecture he gave last month at Yale University, where he was Visiting Composer and Poynter Fellow in Journalism.