Fifty years ago this weekend, Australians voted on two constitutional changes. One of them was defeated, and that’s still influencing election results today 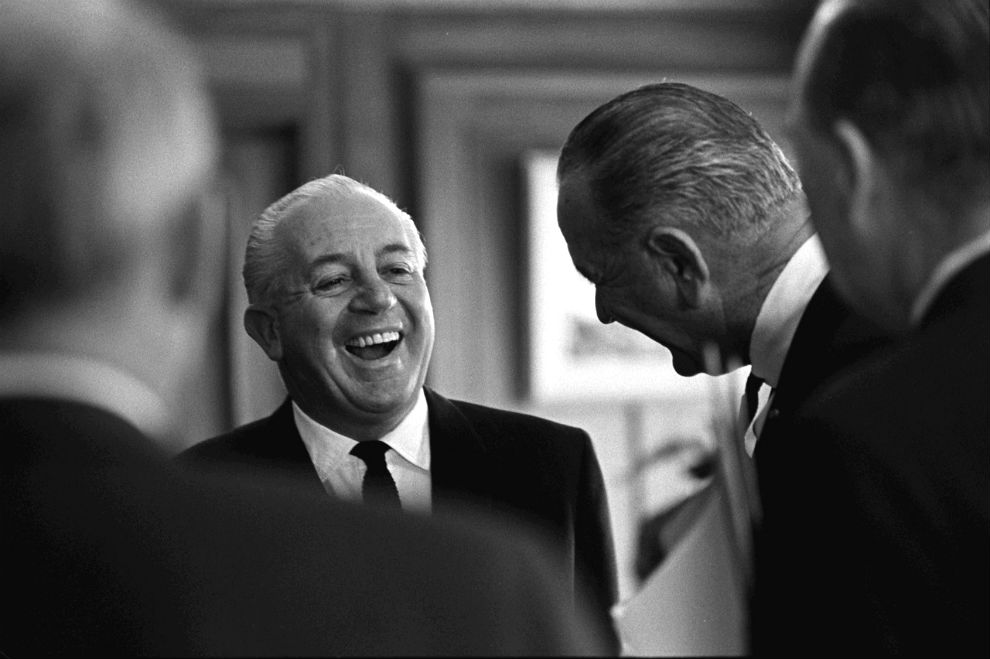 A different nexus: prime minister Harold Holt (centre) at a reception in Canberra for US president Lyndon Johnson in October 1966. LBJ Presidential Library A3348-36

“There could be a case for welcoming a No vote on Saturday on the ground that it would shock governments and people into doing something more than verbalising.” So wrote the frustrated editor of the progressive magazine Nation on 20 May 1967, just a week before the referendum that overwhelmingly endorsed new constitutional recognition for Aboriginal people. Looking back fifty years later, we might concede that he had a kind of point, though few people would regret the fact that the Yes vote won, supported by almost 91 per cent of voters. The decisive argument, for Nation, was that “the Aboriginals themselves have indicated through their spokesmen that they want the Constitution amended.”

On the same day, another proposal was put to the Australian electorate. Unlike its Indigenous counterpart, this largely forgotten referendum was defeated by almost 60 per cent of voters, and the consequences of that vote persist to the present day.

Section 24 of the Constitution requires the number of members of the House of Representatives to be “as nearly as practicable, twice the number of senators.” Holt’s government wanted to remove that clause (the “nexus”) so it could increase the number of lower house seats without increasing upper house representation. (At the time, the 124 MHRs were roughly matched by sixty senators, ten from each state. The two mainland territories had no senators until 1975.) Given the amazing disparity in electorate sizes (some having four times the enrolment of others), a redistribution of the electoral boundaries was long overdue.

The plan to abolish the nexus had its origins eight years earlier in a recommendation of the 1959 report of the Joint Standing Committee on Constitutional Review, a body that gave a young Labor MP, Gough Whitlam, the chance to shine – and to develop thoughts on federalism and an enhanced role for the Commonwealth that he would later set about implementing as prime minister. But the change in the relative sizes of the two houses required a referendum to amend the Constitution.

Under Holt’s predecessor, Robert Menzies, the necessary legislation was passed unanimously by the House of Representatives in 1965. Such harmony was less forthcoming in the Senate, where the two Democratic Labor Party, or DLP, senators and a number of independent-minded government senators registered their opposition. There could never have been any doubt about how the DLP would react: the influence and status it gained from its representation in the Senate would be at risk if an increase in House numbers (where it could never hope to win seats) were not matched by an increase in upper house membership.

Among the Liberal opponents, the most vocal was the Tasmanian curmudgeon Reg Wright. Not overly concerned with Westminster norms, he frequently conveyed the impression that the Senate was the superior chamber in Australia’s bicameral system. Given that his state had ten senators and only five MHRs (and even the latter reflected a constitutionally guaranteed minimum rather than a population-based entitlement), his philosophy may even have had a gram of merit – for a Tasmanian. Three Liberal senators joined Wright in his opposition.

Also on the government side, two Country Party senators opposed the referendum. Although they had broken ranks with their parliamentary leadership, their stance also reflected reservations within their party organisation. At the heart of Country Party concerns was a fear that an enlarged House of Representatives would reduce the overall proportion of rural seats and enhance the Liberal Party’s prospects of governing in its own right – a status they came within two seats of securing in the 1966 election.

After succeeding Menzies as prime minister, Holt postponed the referendum on the grounds that pressure of business (a federal election was looming) would not allow the government to campaign properly, making defeat of the proposals more likely. This was certainly true in relation to the nexus proposal, though less so in relation to Aboriginal recognition.

Polls taken between early 1966 and May 1967 revealed substantial opposition to the plan to break the nexus, leaving its proponents with a formidable task. While all three supportive party leaders (Holt, McEwen and Whitlam) campaigned for the Yes case, Holt as prime minister was under most pressure. Anticipation of likely defeat may have made for less enthusiasm on the government side, whereas the No case was pursued with vigour by Wright, the DLP and sections of the press. Misleadingly, if predictably, they argued that a Yes vote would result in an increase in the number of parliamentarians. In a nation not renowned for holding politicians in high esteem, this was a sound strategy.

Holt and his allies had the more complex task of advocating the breaking of the nexus in order to limit future increases in the number of MPs to the lower house only. Delivered on ABC TV and radio a mere twelve days before voting day, the prime minister’s “campaign” address was almost a case study in how not to resurrect a struggling cause. Well over 1000 words of detailed argument would have driven all but the most avid of political tragics either to a commercial alternative or to the kettle. By contrast, Holt’s advocacy on the more popular Aboriginal question was just a few hundred words.

In addition to their anti-MPs theme, the No advocates argued that the status of the Senate must be preserved in order to protect the smaller states. Any evidence that the Senate had ever played such a role had always been minimal, but the claim may have had some appeal to voters outside New South Wales and Victoria.

A poll taken a week before the vote indicated a 51–33 advantage to the No side, with 16 per cent undecided. Polling day revealed that the undecideds had broken marginally with the No side for a national vote of 40.25 per cent for and 59.75 per cent against. New South Wales was the only state to record a majority (51 per cent) for the Yes side, and while it was no surprise that Tasmania (23 per cent) and Western Australia (29 per cent) most favoured the status quo, the votes of Victoria and Queensland, as judged by today’s political culture, seem anomalous. The latter recorded the second-highest Yes vote of 44 per cent. Perhaps the absence of an upper house in that state may have left voters less concerned about a strong Senate, but the explanation remains elusive. The Victorian vote (a low 31 per cent) seems even more curious, judged from today’s perspective, in which the state is seen as a long-term bastion of progressivism. South Australians voted 34 per cent in favour.

The loss had several consequences. For Holt, it was the start of a poor electoral sequence that took much of the gloss off his record victory in November 1966. The referendum would be followed by the loss of a government seat in the Corio by-election, a loss in the Capricornia by-election (a Labor seat that he foolishly declared he might win), and a vastly reduced Senate vote in November 1967. At the time of his death in December, Holt no longer represented a self-evident electoral plus for the government.

For political scientists, the result confirmed the dictum that for a successful referendum, the support of government and opposition is a necessary but not sufficient condition. The opposition of the DLP and a few government dissidents, supported by some sections of the press, was enough to carry the day. In this, they were assisted by the ease with which an anti-politicians theme could be pursued, even though the argument was essentially dishonest and misleading.

The anti-politicians theme would rear its head again in the 1999 referendum on whether Australia should become a republic. Opportunist monarchists manufactured common ground with those republicans who favoured a directly elected head of state and opposed the “minimalist” model on offer on the grounds that politicians would probably choose another politician or a member of the “elite.” Any vote that can be represented as giving politicians a beating seems close to a sure bet.

While the referendum result didn’t preclude future increases in the size of parliament, Holt accepted the outcome as a vote against any increase in House numbers for the immediate future. Indeed, three governments (McMahon, Whitlam and Fraser) would fall before the Hawke government legislated to enlarge the House by twenty-four in 1984. With the nexus still in place, this necessitated an increase of twelve in the number of senators – and a consequent reduction in the quota for election in both half-Senate and double dissolution elections. Various micro-party candidates who may have been unsuccessful under a higher quota have since been elected as a result.

The more famous of the two 27 May 1967 votes, meanwhile, deleted that part of section 51 that had prohibited the Commonwealth from making laws with respect to “the aboriginal people in any State,” along with section 127, which had precluded “aboriginal natives” from being counted in “reckoning the numbers of people” in Australia. The 91 per cent vote in support was a record not surpassed by any referendum since then. If an enhanced constitutional recognition proposal is put to the electorate at some future date, it will be interesting to see whether that high-water mark can be matched. •

Paul Rodan is an adjunct professor in the Department of Education and Social Sciences at Swinburne University of Technology.