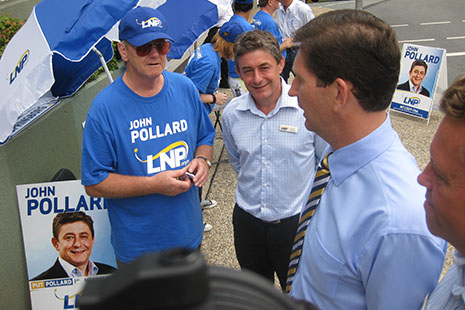 AFTER THE LABOR government, the organisation facing the biggest test in the Queensland election was the new conservative hybrid, the Liberal National Party. It had polled well in the lead-up to the election, but the swing it needed to win government – in the vicinity of 8 per cent – was always on the outer margins of probability.

Different lessons will be drawn by different people from the party’s first electoral showing, but one thing is certain: there will be no rush to the altar by the conservative parties in New South Wales and Victoria. A clearcut and decisive victory might have had that effect; an encouraging failure not so. In fact, the jury is still out on the merits of the union, despite that fact that even staunch opponents of it, like the Liberal senator George Brandis, concede that the LNP is here to stay.

The optimists of continuing union will no doubt find a tempting parallel with Robert Menzies and his newly formed Liberal Party facing its first electoral test in 1946. The conservative forces had all but collapsed after Labor under John Curtin stormed to victory in 1943, taking seventeen seats from a divided and demoralised opposition. Curtin garnered almost 50 per cent of the primary vote against a mere 33 per cent for the conservatives, who ran under a bewildering array of labels – United Australia Party, Liberal Democrats, Liberal Country, Country–National, Queensland Country and Country, Liberal and Country League (in South Australia) and Nationalist (in Western Australia). Tellingly, a thumping 12 per cent of the vote went to independents.

The upshot of this electoral rout was the eventual formation of the Liberal Party, uniting the conservative forces, except the Country Party, under a single banner. At the election in 1946, Labor’s support held firm but the combined non-Labor force picked up to a more respectable 43 per cent, largely drawing into the fold the votes that had flowed to non-party candidates at the previous election.

The Liberal Party had its nervous Nellies who saw the new party, with its unrealistically high hopes, as ineffectual; in Sydney, where Menzies was never popular, it led to a new bout of “you’ll never win with Menzies,” meaning that the party was right but it had the wrong leader.

The party’s Victorian president (and later federal president), William Anderson, was succinct in his opinion, in words that might bear examination in Queensland today: “At the last federal election we nearly won. We had an excellent policy. It was not the policy that lost the election, and it was not that people were not dissatisfied with the Labor Party. What lost us the election was that the people were not satisfied with the bona fides of the Liberal Party. They were not satisfied that we were dinkum, that we meant what we said…”

It is that good old Australian word, dinkum, that is the key here: the bulk of the electorate simply withheld its trust from this new political entity. It had failed to prove itself. Over the next three years it convinced some of the doubters – but more than anything it was aided by a gift from Labor, Chifley’s ill-starred bank nationalisation proposal in 1947, which suddenly made all the rhetoric about socialism almost tangible. The great asset Menzies was able to take into the 1949 campaign was, apart from his own leadership, an issue.

Of course, the comparison between the Liberal Party in 1946 and Queensland’s LNP in 2009 has its limitations, but it does offer supporters of the merger something of an historical precedent. But the comparison ends there: the LNP has no Menzies and a real issue has yet to emerge.

The conservative parties, like the Bourbons, appear to learn nothing from history. In 2007, a ragged and accident-prone Labor government led by an embattled and still obscure premier was on the ropes in New South Wales, just waiting to be cut down. Even if the divided rabble that then comprised the state Liberal Party could somehow manage to convince voters that it was a genuine alternative, any faint hopes were surely dashed at the opening of the campaign when Liberal leader Peter Debnam proposed massive spending cuts. The public, not easily fooled, saw it right from the start: public services, already dilapidated, would get even worse under a policy of retrenchment. What did the LNP do in infrastructure-challenged Queensland in 2009? Promise sweeping cuts in public expenditure.

The leadership was also a problem. Lawrence Springborg was very much Old National, not to mention a two-time loser. He was not the face to present to urban Brisbane and the sprawling Gold Coast, where the LNP needed to make significant inroads.

And this vital aspect presents a very real problem for Queensland, which is, in one crucial respect, very different from the rest of Australia: it is decentralised (though less so than it was) with the majority of the population outside the metropolis. This divide was reflected in the pre-merger party structure, with an urban (but weak) Liberal Party and a National Party that was strong everywhere but in Brisbane and on the Gold Coast. The aggregation not only failed to resolve the problem, it actually exacerbated it.

The tussle for the leadership of the LNP might well bring some of these tensions to the surface, and in the process expose the uneasiness within the hastily concocted hybrid. The dominant Nationals are unlikely to support a Liberal, but that might be a necessary step to gain traction in the crucial south-east. •

Norman Abjorensen teaches politics at the Australian National University and is a member of the Democratic Audit of Australia. His most recent book is John Howard and the Conservative Tradition.