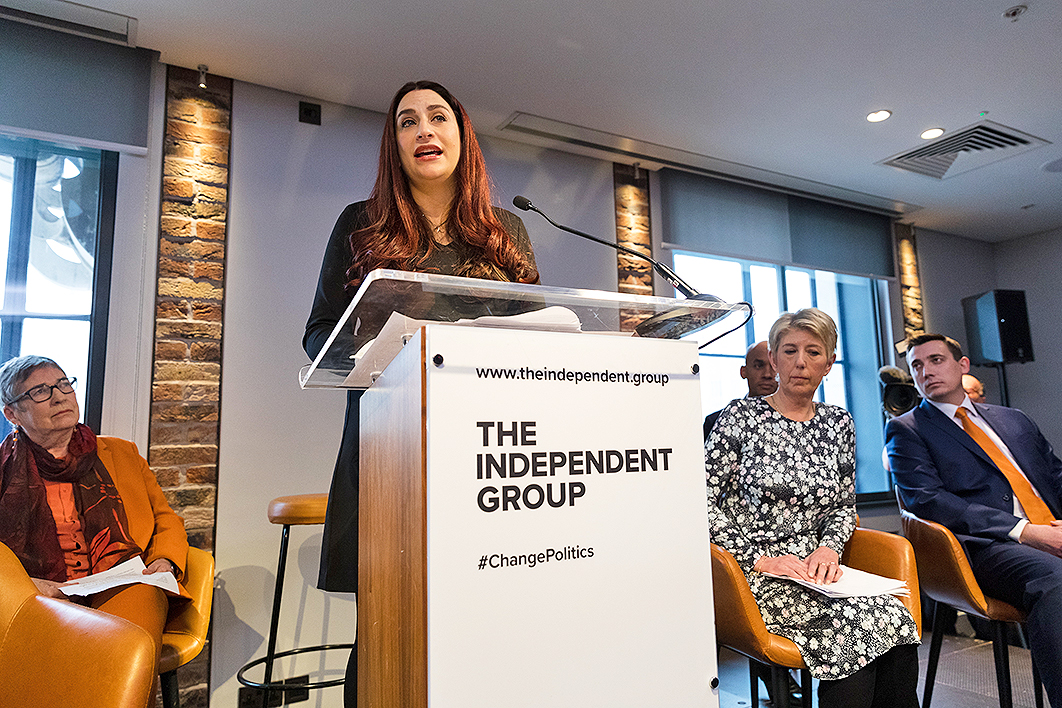 A coincidence of seasonal and political events can itself bring release. Perhaps that’s why, on a light, chirruping Monday morning, when news came through that seven centrist Labour MPs were leaving the party to form an “Independent Group” in parliament, it was Wolf Biermann’s perennial song-poem “Ermutigung” (Encouragement) that floated into my mind. Written for a friend in hard times, lacing recognition with advice, it makes the cycle of life itself a source of hope:​

The buds burst from their branches ​
We want everyone to see ​
Then they’ll know the truth.

Soon the reverie was overtaken, as the seven gave their pained individual reasons for departing: Labour’s indulgence of Brexit, its foreign policy leanings, its anti-Semitism, Jeremy Corbyn’s leadership. “I am leaving behind a culture of bullying, bigotry and intimidation,” said Luciana Berger, one of Labour’s three Jewish MPs. Labour has been “hijacked by the machine politics of the hard left,” said Chris Leslie. The last contribution, by the group’s figurehead, Chuka Umunna, was also aimed at like-minded, if wavering, Labour backbenchers: “Politics is broken. It doesn’t have to be this way. Let’s change it.”​

By midday, as the group dealt with a crashed website and a minor racial gaffe, the initial more-in-sorrow response of Labour loyalists had turned to apoplexy, scorn and demands that the quitters fight by-elections. But by evening the venture’s emotional impact was becoming clear. Deputy Labour leader Tom Watson released a heartfelt five-minute video message, saying, “I love this party, but there are days when I do not recognise it,” and warning that unless the party changes, “we may see more days like this.” Then, at their weekly meeting, Labour parliamentarians reportedly broke into applause at the (pro-Corbyn) chair’s mention of their ex-colleagues’ departure. ​

In other words, the day was a triumph for the politics of the deed. Just by existing, the independents have given a welcome shove to an inert polity devitalised by the mind-numbing combination of the Brexit negotiations and the humiliating Theresa May–Jeremy Corbyn duopoly. As Philip Collins, who has used his Times column to argue for the creation of a new ex-Labour formation, remarked, “Politicians who act decisively always grow. That is happening today.”​

Where now? Britain’s political system, with its built-in preference for two-party hegemony through first-past-the-post voting (at least for general elections), is a bleak house for splitters. An oft-cited precursor is the Social Democratic Party — Atlanticist, pro-European, market-friendly, constitutional reformist — launched by four ex-Labour cabinet ministers in March 1981, when the party was led by the decent but ineffectual Michael Foot and heavily infiltrated by the far left. The SDP burned brightly, won media hearts, allied with the Liberals, narrowly failed to pip Labour in 1983 and become official opposition to the Conservatives — and never regained its lustre.

Even if the broad parallels between 1981 and 2019 are discounted, the larger obstacle to an insurgent party stands. Just as the SDP–Liberal alliance was handicapped in 1983 by its even geographical distribution of support, the UK Independence Party’s 3.9 million votes in 2015 earned just one member of parliament, and that anti-EU party is now a far-right shell. But there was a catch. In practice, the cost of marginalising UKIP was to mainstream its Europhobia, just as (more benignly — though Corbynites would disagree on that) the victory of Tony Blair’s rebooted Labour in 1997 was in part an unheralded victory for the SDP. Could such a trajectory be made to work for Chuka and company? ​

Today’s circumstances are so dire as to be almost propitious. Both major parties are poisonously divided, Brexit amplifying their vacuum of leadership. The Independent Group is a symptom of this crisis and also an agent. In this situation, and with the assistance of a media ravenous for movement after two years of frenetic stasis, its démarche may yet contribute to the political opening, even realignment, that alone (or so it seems) can bust the present sclerosis. ​

Brexit — the process of leaving the EU rather than the decision itself, if such a distinction can be made — has paralysed British politics. Theresa May is the single-issue prime minister of a single-issue country. So retarding are Brexit’s effects, so consuming its emotions, that no one can any longer imagine anything outside or beyond. As the 29 March departure date nears, the fate of the UK–EU withdrawal agreement — negotiated by the prime minister’s team but rejected by the House of Commons, mainly over guaranteeing an open border in Ireland (the “backstop”) — remains unresolved. With survival in power her sole aim, May strings everything out in hope of a last-minute fix. But if the main responsibility for this purgatory is May’s, nationalist Tory diehards and socialism-in-one-country Corbynites — covert pals, equally hostile to Europe — share it too. ​

A centre-left option for voters, positioned between extremes, morally responsible in tone as well as policy, has always been Labour’s route to victory. The party’s discredit of recent years, in and out of government, together with politics’ tug to the left in response to economic failures and the storming Corbyn-led electoral campaign in 2017, has cast a shadow over this truth. Does the electoral basis for a centrist appeal of this sort still exist, however? In at least restoring the question to the public agenda in an explicit, high-profile way, the independents’ split is a big moment symbolically and may become so politically. ​

The measure of that will lie partly in how many more disaffected Labour MPs they attract. As well as the existing seven, three more previously resigned the whip and are sitting as independents. Several more are said to be “thinking hard,” though there are good reasons to hesitate over such a wrenching step. This split has a way to go to match the scale of Australia’s Labor split of 1955, but it is more likely to grow than stall. ​

The popular and grassroots response is also a factor. Survation’s instant poll finds respondents endorsing the group’s creation by 56 to 20 per cent, and has it leading Corbyn’s Labour by 40 to 23 per cent as the party that “best represents the people of Britain.” For its part, Labour’s expanded membership tends to be educated, middle-class, and strongly anti-Brexit — and thus unhappy with Corbyn’s equivocal position (though he ostensibly backs a customs union with the EU and the “option” of a new referendum, as campaigned for by Umunna and others). That looks to be the group’s natural base, including in any elections. But greater reach will require a distinctive social and economic argument too, including among more traditional voters now caught between rival Labour and Tory versions of populism. ​

Whatever happens over Brexit — a last-minute unblocking, an agreed extension of the deadline, or a parliamentary coup to avert a no-deal outcome — will test the group, as it will everyone. But the independents have, for the moment, the rare asset of moral autonomy. By acting, not waiting, they have lit out for new political territory. In Britain’s enfeebled landscape, it’s hard to overstate how encouraging is that springtime gift. •