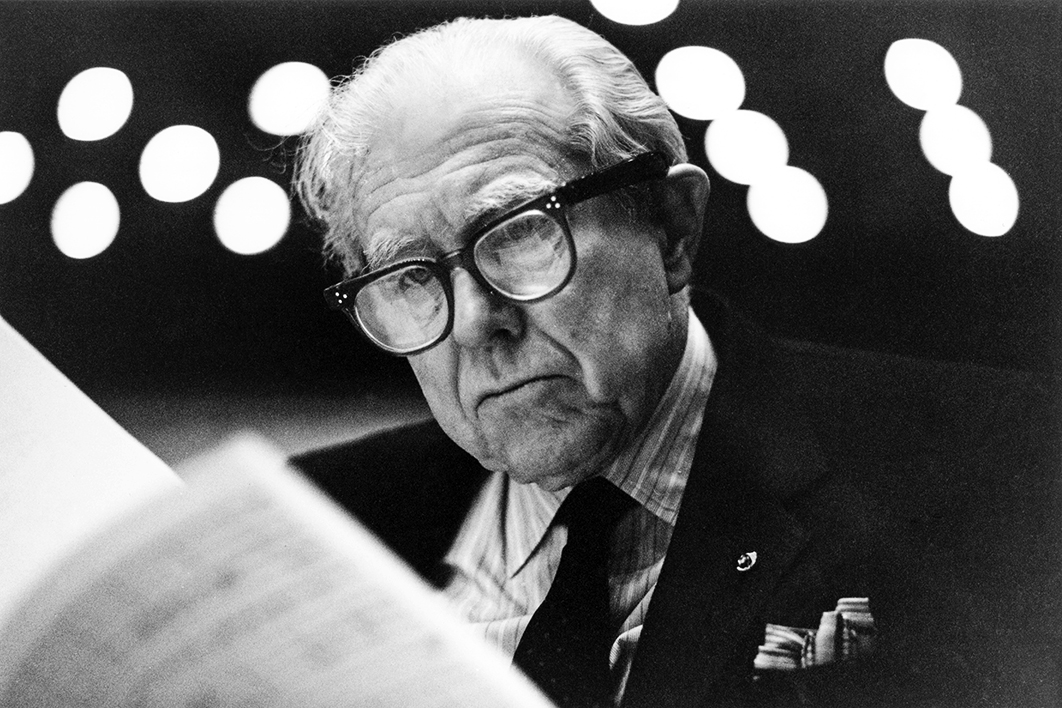 Before the flood: Elliott Carter at the Royal Festival Hall in London in February 1991. Lynda Stone/Getty Images

The art of the biographer — at least, when your subject is still alive — is to pick your moment; it’s also the art of the musicologist. Accordingly, David Schiff waited until Elliott Carter was in his mid-seventies before publishing an impressively detailed study of his work, The Music of Elliott Carter.

Born in New York in 1908 and able to recall a time when it was possible to ride his bicycle the length of Manhattan and not see a car, Carter was something of a late bloomer as a composer. He had an early supporter in that pioneer of American music, Charles Ives; at Harvard, his teachers included Walter Piston and the visiting professor, Gustav Holst; later, he studied with Nadia Boulanger in Paris. After Boulanger, Carter emerged as something of a neoclassicist, before his friendship with Aaron Copland led him to attempt more populist works, such as the wartime Holiday Overture. It wasn’t until Carter was forty years old that he started to compose the distinctive and uncompromising music we now associate with him. Complex and multilayered, both harmonically and rhythmically, and often the result of thousands of pages of sketches, Carter’s music earned him a substantial reputation. But he worked slowly, so there were not a lot of pieces — about four per decade, beginning in the late 1940s.

In 1983, when Schiff’s book appeared, Carter was still composing, but his major works appeared to be behind him. Among them were three string quartets, the Double Concerto, Piano Concerto and Concerto for Orchestra, A Symphony of Three Orchestras, and three late vocal works to poetry by Elizabeth Bishop, John Ashbery and Robert Lowell, a return to word setting after a thirty-year break.

But Carter wasn’t done, and the vocal works weren’t late at all. Following the publication of Schiff’s book came two more string quartets, concertos for oboe, violin and clarinet, and a series of orchestral works, three of which added up to his Symphonia, which at nearly fifty minutes was the longest work of Carter’s career. The composer completed it in his eighty-eighth year, and the work’s subtitle (from the seventeenth-century poet Richard Crashaw) was “Sum fluxae pretium spei” — “I am the prize of flowing hope.”

Symphonia had its premiere in 1998, as part of the celebrations for the composer’s ninetieth birthday. The same year, Schiff published an updated edition of his book, taking account of the flurry of works from the previous decade and a half. Surely, now it was safe to sum Carter up!

But, no. Because 1998 was also the year of Carter’s first opera, What Next?. And it didn’t stop there. Carter died in 2012, just five weeks shy of his 104th birthday, and he had been composing until a few months before that. In fact, if one looks at a chronological list of his works, the midpoint of his career appears to be his ninetieth year. As Carter approached and then passed his centenary, he stepped up his rate of production. A good many of the new pieces were miniatures, but there were also concertos for flute, horn and cello, a series of works for piano and orchestra, the Boston Concerto (in effect, a new concerto for orchestra) and a series of vocal works to words by great American poets.

No longer obliged to produce reams of sketches for each work — many of the new miniatures were themselves effectively sketches for the bigger pieces — Carter said he now knew how his music should go. But he wasn’t resting on his laurels. On the contrary, in the year of his hundredth birthday he experimented with music that abandoned his trademark rhythmic and harmonic complexity. Sound Fields has a string orchestra sailing peacefully through a sea of minims at a never-changing mezzo-piano.

Now, six years after the composer’s death, we have a new book by Schiff that doesn’t replace either edition of his first book, though it incorporates material from both. Appearing in Oxford’s Master Musicians series, Carter (as the new book is called) incorporates elements of biography, as is the house style of this august imprint.

Though he was a student and friend of the composer, Schiff is not uncritical of either the music or the man. He has, for instance, serious doubts about the worth of What Next?, which he finds charmless and full of stereotypes. Some of the later song cycles are better than others, though we must depend on Schiff’s word for this as it is frustratingly difficult to hear them. Much of Carter’s later music has been recorded, but he wrote such a lot of it that we are still awaiting recordings of his two Wallace Stevens cycles and his settings of Marianne Moore and stanzas from T.S. Eliot’s Four Quartets.

The composer was averse to letting out biographical detail, therefore much of what little we read here seems new. He was, we learn, possessed of a foul temper, partly ameliorated with age, and his political views, which many had assumed to be liberal, were probably not. His family was wealthy and Carter never needed to work. Among many titbits, we learn that for much of his life he had a debilitating stammer, that he had once been a chain smoker (an attempt to deal with the stammer) and — remarkably — that Daniel Barenboim, who commissioned What Next?, originally proposed Woody Allen as the librettist. One can only imagine how it might have turned out.

In due course we shall need both a proper biography and a fuller critical study of the music of this man who, in the end, turned into a remarkably prolific composer. But for the time being, Schiff’s book is personal, opinionated and eminently readable. •