Could the success of smart, well-connected candidates realign conservative politics? 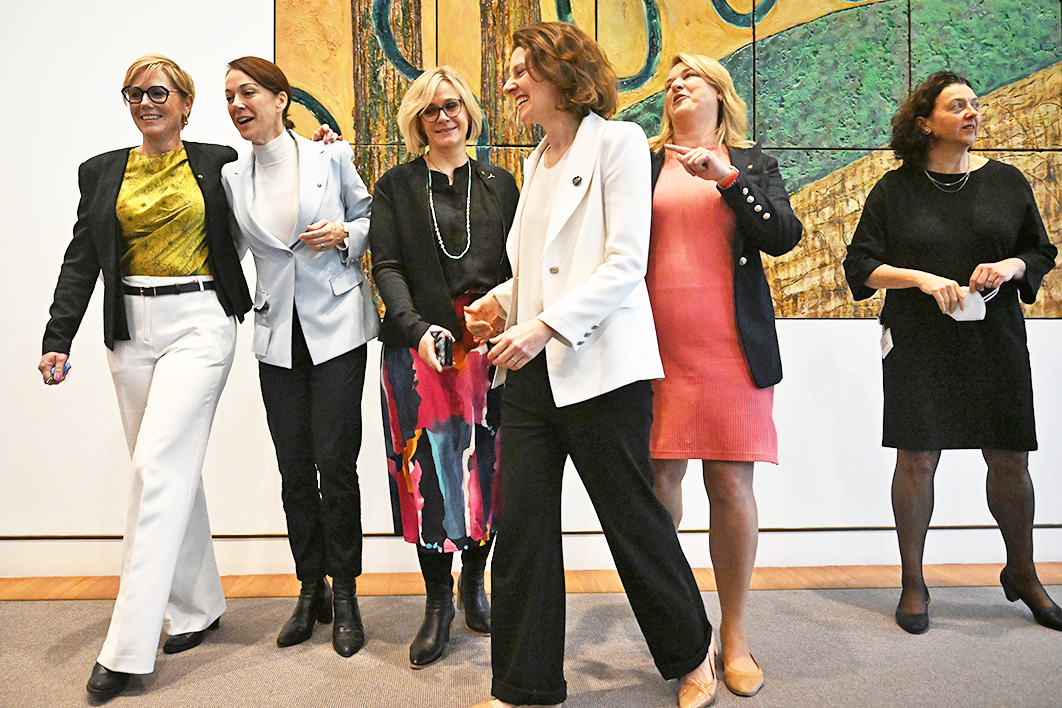 There are many commonly held misapprehensions about Australian politics.

Contrary to popular belief, voting is not compulsory. No one compels you to number the boxes with your little pencil. (But you do have to turn up and watch as someone from the Electoral Commission rules a line through your name; so, hey, you might as well vote.)

Contrary to the view of some journalists in the press gallery, with our system of preferential voting parties can win government with a primary vote of less than 40 per cent. (Labor led by Anthony Albanese did just that.)

And the teals are not really teals; they’re more cyans. (That’s what you get when you mix Liberal blue and Greens green together.)

Despite their misnomer, the teals gave Australia’s jaded democracy a welcome jolt — and we should all be grateful to them. Two short new books tell the fascinating story of their rapid rise to prominence and their impact on Australia’s fabled two-party system (which is also a figment of everyone’s imagination, but more on that later).

Journalist Margot Saville’s The Teal Revolution takes us inside the various teal campaigns at May’s federal election. She talks to the candidates, the advisers, the fundraisers, the organisers and the volunteers who made it happen. She discovers a committed cadre of well-heeled, tech-savvy guerillas energised by their disgust at the Liberal Party’s failure to tackle climate change, integrity in politics and the treatment of women. Even today, I’m not sure if the Liberal Party truly understands how it got king-hit in the car park.

As Saville reminds us, “Anthropologist Margaret Mead once wrote: ‘Never doubt that a small group of thoughtful, committed citizens can change the world. Indeed, it is the only thing that ever has.’”

It’s a story that was pretty much neglected by the mainstream media. While the press gallery was excitedly misinterpreting an insignificant mistake by Albanese at a press conference, Saville was out talking to people who were about to make history.

Any of these women could have been preselected by a slightly different Liberal Party — if it had possessed the wit to approach them. Indeed, two of them, Allegra Spender and Kate Chaney, are Liberal Party royalty. But here they were, burning down the house they were raised in.

They’re now in Canberra, where they’ve joined a cohort of like-minded crossbenchers in the House of Representatives. They didn’t quite get the balance of power, but their brother-in-arms, former Wallaby great David Pocock, has a key vote in the Senate.

On election day 2022, Saville tells us, Monique Ryan was driving home from casting her vote, and having a good cry. The paediatric neurologist was convinced she’d fought and lost. Do you like the idea of politicians who shed tears because they think they might have let down the voters who supported them?

Just a few hours later she was on national television being told she had toppled treasurer Josh Frydenberg, seen by many as a future PM.

He waited days before gracelessly conceding, Saville tells us. “The defeated member for Kooyong never uttered the words ‘you won’ or ‘congratulations,’” writes Saville. “Frydenberg, a former tennis champ, was offering no polite handshake over the net.”

You can always judge a politician by their post-politics job: Frydenberg is now banking a mint at Goldman Sachs. But his sense of entitlement about Kooyong, his intransigence in the face of new ideas, his inability to maintain civil connections with people who disagreed with him, and his failure to build strategic partnerships are symptomatic of the Liberal Party as a whole.

Starting with John Howard and ending with Scott Morrison, Australia’s most successful political party has moved, it seems, from broad church to narrow-minded cult. During the campaign, a hopelessly out-of-touch John Howard was rolled out and promptly blew a large hole in the Liberal voter base when he described the teal women as “groupies.” As Saville notes, “‘I’ve had enough of this crap,’ thought many women. ‘I’m going to vote these dinosaurs out.’”

Simon Holmes à Court’s The Big Teal is a mini-memoir by one of the teal movement’s more important players. Holmes à Court is the bolshie child of a billionaire father, the late Robert Holmes à Court, and his equally accomplished mother, Janet. Given his background and business interests you’d probably pick young Simon as a Liberal Party supporter. And for a while, he was.

He relates how he went from being a supporter of Frydenberg’s via his membership of a Liberal Party fundraising organisation called Kooyong 200 to becoming an arch enemy of the Liberal Party’s boy wonder when he set up a pro-teal fundraiser called Climate 200.

Holmes à Court had become deeply frustrated by the Coalition’s lack of commitment to fighting climate change and had turned his considerable talents against them. Doing the right thing for the planet, and encouraging new businesses to do it, seemed like a no-brainer to a billionaire’s son, but would the Liberal Party listen? No, it wouldn’t. The dominant right wing of the party, and their sidekicks in the National Party — and even so-called moderates like Josh Frydenberg — knew better.

Though it was only started in mid 2021, Climate 200 managed to raise $13 million by election day. Thirteen million is peanuts compared with what the major parties raise, but every Climate 200 dollar invested in the teals paid dividends in the end.

Holmes à Court is particularly good at exposing and explaining how money greases the system of Australian politics. Did you know, for example, about “telephone rights”? Drop a $5000 donation on the Coalition and you acquire a hotline to the minister of your choice.

“It’s no surprise to me that Australian politics can be so transactional,” he writes, “but I was shocked to discover that some politicians are so cheap.”

To protect its brand as an honest broker, as a supporter not a player, Climate 200 always remained at arm’s length from the political trenches of the teal campaigns. “Climate 200 has never started a campaign, nor chosen a candidate,” explains Holmes à Court. “Every campaign we’ve supported began within their community and showed us they had a head of steam before we chose to turbocharge them.”

The puppetmaster slur peddled mainly by News Corp never got traction because it wasn’t true.

So, what lessons does this story of the recent past have for the near future? As always in politics, it’s hard to predict what might happen, but here are some ideas for your consideration.

Once elected, independents have a knack for sticking around. Every time they win, they get better at winning. Ominously for the Liberal Party, one teal adviser quoted by Saville says that teal insiders saw the 2022 result as “a launch pad, not a landing zone.”

The late Peter Andren — who doesn’t get a mention in either book, incidentally — held the NSW rural seat of Calare from 1996, when he won on Labor preferences, until his death in 2007, by which time he was winning by a mile on primary votes. That’s more than a decade in office.

The Tasmanian independent Andrew Wilkie first entered federal parliament in 2010; twelve years later he’s still there. Cathy McGowan won the seat of Indi twice and now her fellow independent Helen Haines has held the seat at two subsequent elections. As a result, Indi’s had an independent MP since 2013.

After winning in Warringah in 2019, Zali Steggall won again in 2022. The South Australian independent Rebekha Sharkie first became a federal MP in 2016 as a member of the Nick Xenophon Team, survived a by-election in 2018, and has been winning as an independent ever since.

Could the newly elected teals last as long? And could the crossbenches grow in number at future elections? Yes and Yes.

This brings us to Australia’s “two-party system” — which, as I said, is a figment of our national imagination.

Australia has two main political teams: in the red shirts is Labor, factionalised but unified in pursuit of office; in the blue there’s a coalition, known as “the Coalition,” made up of the Liberal Party, the National Party (formerly the Country Party) and a strange hybrid beast from Queensland called the Liberal National Party.

So — not really a two-party system; it’s more a two-main-sides system. And the blue side turns out, under current conditions, to be increasingly unstable. The Coalition needs all of its constituent parts working in unison to achieve government. Is this in doubt?

Now, foolish political scientists used to sometimes get drunk and predict the demise of the National Party. It hasn’t happened. In fact, at the 2022 election the National Party pretty much maintained its seats. As did the Queenslanders. It was the Liberal Party that famously dive-bombed into an active volcano, shot out of the sky by the teals and a disciplined, resurgent Labor Party.

So, will juiced-up pol sci academics start predicting the end of Menzies’s child? Could the continued success of smart, well-connected, well-educated and capable female teal candidates force a realignment of Australia’s conservative politics?

During the 2022 election campaign, in the federal seat of North Sydney where I live, I heard an effective line of attack deployed again and again against the hapless Liberal Party: “A vote for the Liberals is a vote for Barnaby Joyce.” Indeed, in the face of a growing climate catastrophe, why would you use your vote to help get a pro-coal National Party member into cabinet if you had a choice between a teal and a Liberal Party hack?

And finally, is Peter Dutton (known as The Placeholder in my house) the man to overcome this contradiction, square this vicious circle, and return the Liberal Party to its former glory? Let’s see. All we have to do is wait, and watch. •