The independent MP Peter Andren took a strong stand against John Howard on asylum seekers, and his vote went up at the next election, writes Peter Browne 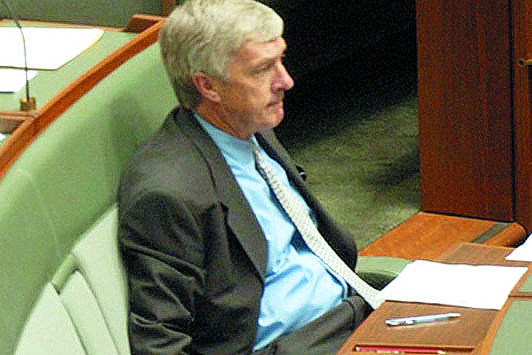 Independent MP Peter Andren, whose two-party-preferred vote rose to 75 per cent in 2001.

A few months after John Howard was elected Liberal leader for the second time in January 1995, Peter Andren, news editor, program maker and former newsreader at Channel 8 in Orange, sat down with his son Josh and analysed the voting figures from the previous federal election. The sitting Labor member, David Simmonds, had just announced his retirement from parliament and there was no obvious successor. On that winter’s night in Molong, a small town in the sprawling regional electorate of Calare, Andren decided the seat was winnable.

Just as the Liberal Party made the shrewd decision to give Howard a second chance as leader, Andren made the right judgement about the electoral arithmetic. Less than a year later Howard was prime minister and Andren was the new independent member for Calare, which takes in the NSW regional centres of Bathurst, Orange and Lithgow. On almost every issue, though, the two men couldn’t have been more different.

Over the next few years Andren gained a reputation for hard work and independent thinking among parliamentarians and press gallery journalists and in his electorate. Despite supporting the government’s gun laws – hardly a popular cause in a seat like Calare – he increased his two-candidate-preferred vote to 72 per cent at the 1998 election and appeared set for a long parliamentary career. But the 2001 election, dominated by international security fears and the government’s hostility to asylum seekers, confronted Andren with a daunting challenge.

Late on the afternoon of 29 August 2001 Andren received a call in his Parliament House office from John Howard. In the feverish atmosphere following the arrival in Australian waters of the Norwegian ship, the Tampa, the government had decided to rush through “border protection” legislation. The prime minister was seeking support for a suspension of standing orders to allow the debate to begin that night. In the meantime, the Tampa was waiting off the coast of western Australia, under the control of an Australian SAS detachment; aboard were the 433 Iraqi and Afghan refugees who had been rescued from their sinking boat.

Andren agreed to Howard’s request but wouldn’t commit himself to supporting the bill itself. After a quick briefing on its contents from the clerk of the house, a short meeting with his senior adviser and “a phone call to my sister Trish in Lithgow,” he scribbled a few notes and went into the house to deliver a short and electorally courageous speech.

The prime minister spoke in support of the bill for about eight minutes. The opposition leader, Kim Beazley, spoke against for just over a quarter of an hour. Andren, taking his turn, told parliament that he hadn’t had enough time to study the legisation in any detail. “But,” he said, “the very aim and tenor of the bill suggests that it is not worthy of support.” He went on: “A few moments ago I spoke to a close relative and tried briefly to explain to her what this piece of legislation was all about. She told me that she supports the prime minister right up to the hilt; perhaps my electorate supports this legislation right up to the hilt – but I do not.”

Andrew Theophanous, a former Labor MP sitting as an independent, spoke next, then the House divided along party lines – with Andren and Theophanous voting with the opposition – and the bill was passed. The next day’s headline in Bathurst’s daily paper, the Western Advocate, read “Let ’em land: Andren.” It seemed the speech could only work to the advantage of Andren’s main opponent at the looming election, National Party candidate David Shearing.

This was not the first time Andren had taken an electorally risky stand in parliament. In 1999 he had argued for a formal parliamentary apology to Indigenous Australians, a position that would not have had majority support in his electorate. In April 2000 he introduced a private member’s bill to override the Northern Territory’s system of mandatory sentencing (delivering “an absolutely superb speech” in support of it, according to the Labor leader Kim Beazley).

Over the weeks following the arrival of Tampa, and especially after the election was called on 5 October 2001, Shearing made a series of intemperate comments about asylum seekers. “We’ve got some of the richest soils in the world but if asylum seekers come in the back door they could be carrying diseases that could ruin our agribusiness,” he told the Australian. “We’ve got a situation where Australia is going to war [in Afghanistan] but Peter Andren wants to let them in to shoot us,” he added. “Do we open up the gates to threats of terrorism or the threats to agribusiness posed by boat people who may be carrying diseases?” he asked.

Finally, with the election just days away, the National Party circulated a leaflet reading, in large black type:

… But you won’t like what he thinks about protecting Australia’s borders.

A vote for Peter Andren is a vote against keeping Australia in safe hands.

Despite the Nationals’ belief that asylum seekers were Andren’s Achilles heel, the media coverage of the campaign in Calare concentrated on local issues. But Lachlan Sullivan, president of the Bathurst Chamber of Commerce, told me that Andren’s attitude to refugees was “everywhere” during the campaign. His feeling was that the Nationals’ attacks on Andren lost them support among former Liberal voters, to the extent that “dyed-in-the-wool Liberals,” in his words, were handing out Andren’s how-to-vote cards.

The Western Advocate was generally sympathetic in its coverage of Andren’s views on asylum seekers. The paper’s editorial writer, Tony Rhead, told me that he was impressed by Andren’s willingness to express his personal view regardless of the electoral consequences, and the paper was critical of Shearing’s extreme comments during the campaign.

Peter Andren didn’t try to play down his views. On the front page of his electorate newsletter, the Calare Independent, he wrote: “Let us as a nation not turn our backs on the world’s refugees, for there will be many thousands more from the Middle East in the wake of the current crisis… We do have the safest and most harmonious nation on earth, why wouldn’t others want to seek safe haven here, and if they have some savings, buy their passage even from a smuggler?”

He also mentioned his policy on asylum seekers frequently in his weekly column in three of the electorate’s newspapers. He was questioned on the topic at public meetings during the campaign, and told me that he had responded to nearly 200 letters and emails and numerous phone calls about asylum seekers. In response to letters arguing that he was out of step with the electorate, he included a photocopy of key passages from Edmund Burke’s famous comments about the importance of a parliamentarian’s conscience. To others he sent a sheet disputing what he called the “myths” about asylum seekers.

The risk paid off. On 10 November he was returned to parliament with a significantly increased first-preference vote and a two-candidate preferred vote of 75 per cent. He won a majority in all but one of Calare’s 85 polling places. David Shearing managed to attract only 21 per cent of the primary vote. In an election in which the Liberal–National government achieved a national swing of over 3 per cent, it was a remarkable result for Peter Andren, who became only the second independent MP to be returned at three federal elections since the 1940s.

What explains this remarkable performance? Within Calare, Andren was seen as a committed, hard-working local member. As Tony Rhead put it, “I’ve yet to meet anyone who hasn’t been happy with the outcome when they’ve taken a problem to him.” According to the Bathurst-based media academic Sally Begbie, “He’s not flashy or showy and he works incredibly hard in the electorate.” He pursued issues that local voters see as important, opposing the further privatisation of Telstra, arguing for changes to study assistance to meet the needs of farming families, championing local industry, and highlighting and opposing “parliamentary perks” like the proposal to award redundancy payments to defeated MPs.

Andren’s personal support enabled him to take advantage of antagonism towards the established parties. Calare voters felt they’d been “duped” by the major parties, according to Len Ashworth, editor of the Lithgow Mercury. They were “disillusioned” with the Nationals in particular, according to Bruce Miller, the mayor of Cowra.

The people I spoke to in Calare believed that voters supported Andren because of his views on Telstra, the regional economy, and other local and domestic concerns. His unconventional views on asylum seekers were not shared widely, they said, but did not weigh heavily against him. As Sally Begbie put it, “it’s very much an attitude of ‘he’s one of us’ and so the locals will support him no matter what.” On the thornier issues, though, a phone survey of 250 Calare voters conducted by Swinburne University of Technology came up with some very interesting results.

Peter Andren’s standing in the electorate of Calare – based not only on his record as an independent member of federal parliament but on his career in the local media – seems to have been such that he could speak out on asylum seekers without diminishing his standing, even among people who disagreed with him. In that sense, the 2001 election result in Calare was a remarkable vindication of the role of an independent MP. •

Peter Browne is editor of Inside Story. This article first appeared in the Canberra Times.