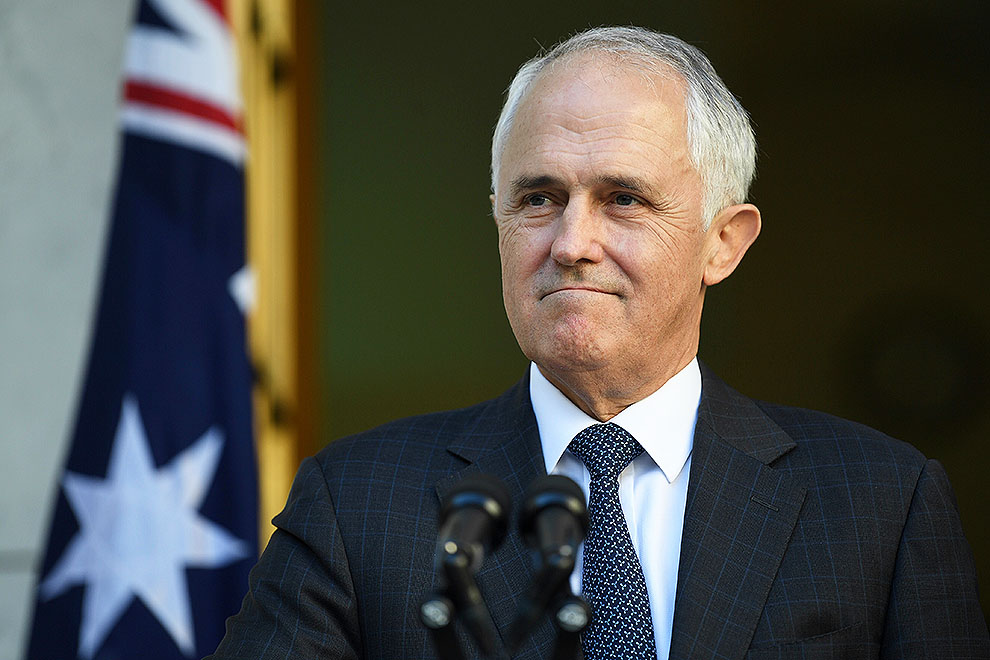 Today’s Newspoll, conducted between last Thursday evening and Sunday and published in the Australian, has the primary vote virtually identical to a fortnight ago: the Coalition sits on 36 per cent (unchanged), Labor on 35 (minus 1), One Nation on 10 (steady) and the Greens on 9 (minus 1). Based on preference flows at the last election, these figures wash through to an estimated 52–48 in Labor’s favour, a narrowing from 53–47 two weeks ago. Malcolm Turnbull’s satisfaction rating is up two points to 32 per cent, and Bill Shorten’s has increased by one to 33. Turnbull wins better PM 42–33, up from 41–32 last fortnight.

There, that’s it, those are all the numbers.

This was a heavily anticipated Newspoll in political bubbleland. With Turnbull’s position under pressure, it was widely believed that his dramatic announcement “abolishing” 457 visas (like Kevin Rudd’s “terminating the carbon tax,” it was an adjustment dressed up as something more) and tightening citizenship rules was intended to influence this particular survey.

Politicians have always indulged in, well, politics, even if it has meant subjugating sound policy to political requirements. And with an election approaching, many have reached for that opinion poll “boost.” John Howard’s July 2007 Northern Territory intervention was a particularly theatrical example, intended to push the Coalition into a competitive position.

And who can forget Rudd (again) in the 2013 campaign? Announcement after announcement – a northern Australia special tax zone here, moving naval shipyards from Sydney to Queensland there – each one quickly dissipating as he searched for that elusive connection with the electorate, particularly the component that made up his home state.

But a leader trying to push the polls up with no election on the horizon sits in a different category. That’s a person trying to retain his or her job. Once mainly the lot of opposition leaders, it has for the past seven years been a characteristic of governing parties.

And it’s not even about what the polls say; it’s about how they are interpreted.

Let us imagine that this Newspoll data and the last one contained no errors of any sort, and measured stated responses among registered voters with total accuracy (rounded to an integer). We still wouldn’t know how much of this modest “movement” came from those migration-related policy changes, how much was influenced by other “events” over the past fortnight, the past month or the past six months, or what the polls would be showing if Turnbull hadn’t made these announcements. Survey results are driven by a Rumsfeldian smorgasbord of known unknowns, long and short term.

The fact is that this Newspoll, for all intents and purposes, is the same as a fortnight ago, but what matters is that the Australian’s online headline reads “Support for PM on the rise” and the blurb says “The Coalition has gained an increase in support over tougher citizenship rules while PM’s voter satisfaction improves.” Other news outlets are repeating this interpretation, and given the centrality of Newspoll to the consensus of opinion within the political class, most reporting will take place through that prism: of a prime minister rebuilding his stocks.

That should stop leadership talk, for a while, leaving clear air to sell the budget in two weeks. That’s the plan, anyway.

Poor Malcolm. It wasn’t meant to be like this; the Coalition was supposed to romp home in the 2016 election, the double dissolution gamble throwing up a more cooperative Senate. With elevated authority, Turnbull was going to drag his party to the sensible centre; he would be the Robert Menzies of his time, above the fray, seeing off all comers.

Instead we remain in familiar territory: a prime minister held in desperately low esteem, under siege from his own side, dragged to the fringe; and an uncooperative madhouse of a Senate crossbench.

Turnbull’s attempt at Howard-like “values” was contrived and obvious, but at least the itch he’s attempting to scratch is felt by the general electorate. That sure beats playing to the Coalition base, as he did, for example, with the renewable energy wars.

But his avenues are limited; party conservatives won’t let him try to engage in other ways, such as on same-sex marriage, climate change and the republic.

The real trouble with this slightly improved Newspoll number is that it increases the chances of downward movement – with predictable interpretation – next time. The next Newspoll will be post-budget; Turnbull seems to be gambling on achieving a “budget bounce.”

Budget bounces are about as common as the Yeti, but Turnbull’s belief in his own abilities to move the immovable remains undiminished. Playing the Newspoll game is a symptom, not a cause, of Turnbull’s terminal position. •