Victoria: where black is always in 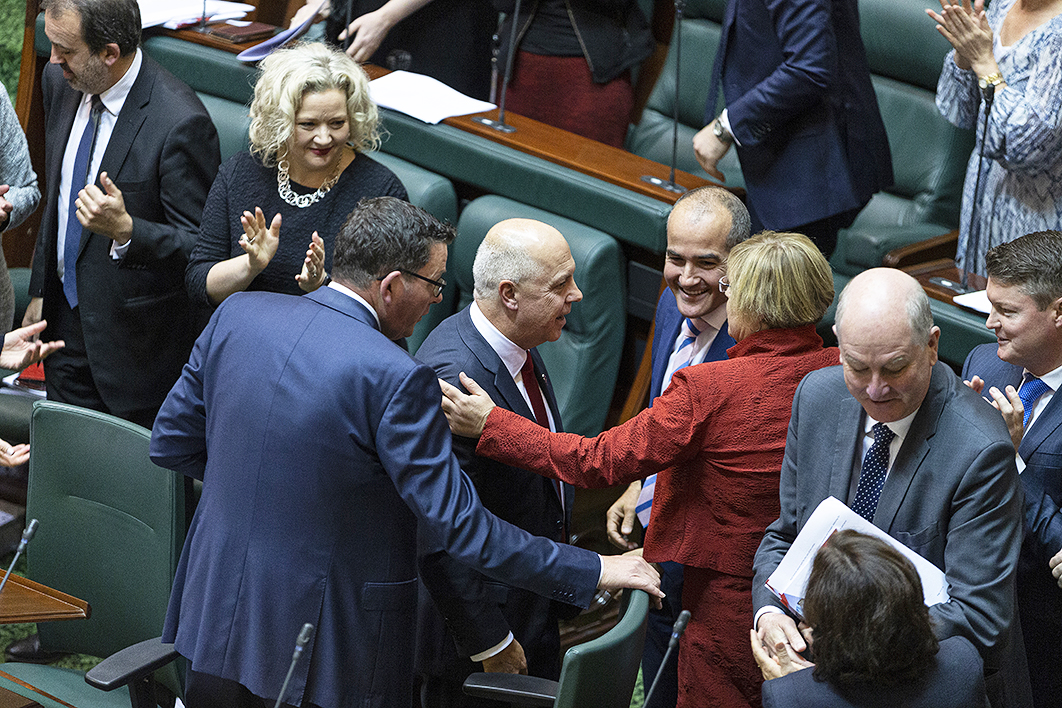 For Victoria’s Labor government, this was the perfect storm. It’s had four years of easy budgets propped up by the state’s booming population, employment, housing prices, etc., etc. But this time everything was out of sync.

Only with a lot of guile and resourcefulness have treasurer Tim Pallas and his Treasury team delivered a projected budget surplus, using a mix of cash-and-grab raids on obscure state funds, small tax rises in obscure areas, and unstated, obscure and unidentifiable spending cuts.

How much could go wrong when your state is booming economically — real spending in Victoria grew almost 5 per cent in 2018 — and is one of the nation’s two growth engines? When your party is fresh from a sweeping election victory in which it decimated the opposition? And when a flood of migration from overseas and interstate keeps creating jobs and new spending like a magic pudding?

Well, plenty has gone wrong for Tim Pallas in the past year (offset by his stunning success in losing weight). For example:

• Housing prices in Victoria have slumped by 10 per cent and home sales by 15 per cent, cutting more than $1 billion off the state’s stamp duty receipts in 2018–19 alone, and even more in the years ahead.

• New national accounting standards will require governments to bring many of their public–private partnership projects back on the budget books — a long-overdue move that Victoria supported. But it abruptly lifts the state’s net debt by $9.6 billion, accounting for the bulk of a spectacular growth in net debt from $23 billion to $39 billion. It also shifts $481 million of previously off-budget interest bills onto the budget.

• Labor won its second term last November on a platform that committed it to more free-spending budgets to boost investment in transport infrastructure and social spending alike. And it doesn’t pay to break promises.

The last four years have been high summer for the Victorian economy. In 2018, real spending in the state was almost 20 per cent higher than in 2014. The state now has 433,000 more people in jobs, three-quarters of them full-time, than when Labor took office in November 2014. And growth has been so high because the state’s population has increased by 570,000 in four years, or almost 10 per cent; Melbourne alone has grown by roughly 500,000 in that time. It’s been boom time.

But this boom time has not seen the state salt away funds to tide it through the inevitable bust. On the contrary. The budget surpluses have been kept small because Labor had other priorities — many of them. In the Andrews government’s first term, the state’s wage bill jumped by a third, total spending on services rose 30 per cent — and, after a slow start, transport investment almost trebled, spearheaded by its policy of removing fifty level crossings from Melbourne’s congested roads.

Sure, taxes rose in line with the increased services. Debt was piled up to finance the road and rail projects, justifiably, given how cheap it is for governments to borrow. It all went down well with the voters, who gave Labor a landslide win at November’s election.

By then, however, the housing boom had already bust. The Victorian Treasury estimates that falling home prices and sales cost the budget more than $1 billion in 2018–19, and roughly $1.25 billion a year for the next three years, relative to its forecasts in last year’s budget. (Peter Martin, then at the Age, warned at the time that Treasury’s forecasts were far too rosy. He sure was proved right.)

The boom saw stamp duty on property transfers become Victoria’s biggest tax. Its collapse has punched one hole in the budget, the new accounting standards have punched another, and the surplus was always more slender than it should have been. So how could Pallas deliver the new spending Labor promised in the campaign — on services alone, $3.7 billion in the coming financial year, plus record infrastructure spending — without big tax rises?

The answer is the real core of this year’s budget. The government leaked its own tax rises to the media early — basically, because they were surprisingly small and obscure, targeting groups with little public support: primarily, foreigners buying property, people buying luxury cars, and company restructures. They add up to just $180 million a year in a budget spending $80 billion a year. The tax hikes on foreign property buyers simply replicate what the Coalition did across the border in New South Wales.

Instead of raising taxes, Pallas and his team used a clever mix of measures to fill the financing gap and emerge with a projected surplus for 2019–20 of just over $1 billion. Their recipe (explained nowhere in the budget papers) was this:

• Spending was cut in the way governments now prefer to do it: by “reprioritising” existing spending plans (no dollar figure given); delaying projects yet to begin (saving $694 million in 2019–20); and cutting every department’s funding by 0.5 per cent, except for frontline services such as teachers, nurses and police ($251 million, but rising steeply thereafter, as a taskforce reviews all spending to search for efficiencies).

That’s on top of the annual “general efficiency” spending cuts, which in Victoria see every department start off with effectively the same nominal funding as the year before, even though inflation means that buys it about 2.5 per cent less. Sadly, often essential maintenance bears the brunt of the cuts, as you can see when you visit a Victorian national park or tourist spot and find it full of weeds. In principle, though, it’s as good a way of cutting spending as any other — and after four years of big spending increases, most departments should have plenty of fat to cut.

• Other taxes came to the rescue. Payroll tax soared as jobs boomed. And while stamp duties fell, new land tax valuations took effect, based on property values close to the height of the boom. Land tax bills in some areas are now double what they were four years ago — with disastrous effects for some, but highly beneficial effects for the budget. (Labor has promised annual reviews in future to prevent such big hikes again.)

• Commonwealth grants came to the rescue. The budget excludes all of the federal Coalition’s election promises — such as spending $7 billion itself to build the controversial East West Link (a politically inspired project that has failed three cost–benefit examinations) and $2 billion to extend the Geelong train line to Waurn Ponds — as these are not yet part of any agreement with the Victorian government (and the first is unlikely ever to be). Even without them, grants are forecast to swell by 50 per cent in five years, as Victoria’s population growth, low mineral royalties, and real estate slump qualify it for a larger share of GST funding.

• The government set up a new Victorian Infrastructure Fund and raided the “hollow logs” of the state insurance agencies to pay for it. The Transport Accident Commission, Worksafe and the Victorian Managed Insurance Authority will pay for their (in the government’s eyes, excessively) prudent management by being forced to cough up $2.3 billion in the next four years to finance priority infrastructure projects.

• Victoria’s Treasury has been optimistic in forecasting the economic parameters. In Victoria’s budget, as in Canberra’s, wage rises are assumed to rise rapidly in coming years — which many economists think unlikely. The slump in property prices and sales is assumed to turn around in coming months, giving way to a gradual recovery. And in summing up the state of the economy, Treasury argues that “the risks to the Victorian economic outlook are broadly balanced.” That’s an optimism you don’t see too often these days.

The net effect is that the state is forecast to generate a $1 billion surplus of revenue over services spending in 2019–20, and bigger ones ahead. They would help finance its record infrastructure spending, which Pallas says will average $13.4 billion a year over the next four years. Most of that is on transport, with four projects dominating: the West Gate road tunnel ($1.6 billion), the Melbourne Metro rail tunnel (also $1.6 billion), the level crossings removals ($1.45 billion), and a much-needed investment in new trains ($910 million).

The government is also planning its next wave of mega-projects: the North East Link to complete Melbourne’s ring road and widen the Eastern Freeway (total cost $15.6 billion), the Melbourne airport rail link ($8 billion to $13 billion), and its worst decision, the Suburban Rail Loop ($50 billion). The federal government, which for political reasons usually opposes whatever Victoria proposes, is however funding the planning work on the airport rail link.

All these, of course, are politically driven choices. The last thing a government on either side of politics would do is to ask the experts which projects would do most per million dollars spent to reduce traffic congestion and/or make public transport more reliable, more consistent in speed and quality, and more useful to the people it is meant to serve.

I suspect the experts might recommend that the mega-projects be replaced by spending on making what we’ve already got work better. Duplicate congested roads, remodel intersections, build more overtaking lanes and highway dividers, and lift the priority given to road maintenance. Give the rail network a twenty-first-century signalling system, more frequent services, and more maintenance. And please, focus attention on what this budget ignored: the under-resourced bus systems that serve the middle and outer suburbs of Melbourne, and country Victoria.

The infrastructure spend will see the state’s net debt rise to a forecast $50 billion by 2021–22, or 10 per cent of gross state product. I have long argued for putting infrastructure needs before debt concerns when borrowing is so cheap. Labor won the state election by doing so, but lost the federal election partly because so many voters believed the Coalition’s taunt that “Labor can’t be trusted with money.”

In politics, wheels can turn. The Andrews government would be far more secure against such taunts in 2022 if it stopped choosing infrastructure projects for political reasons and started selecting the ones that would deliver most value per dollar to Victorians. Voters have given it their trust. It must now give them value for money. •