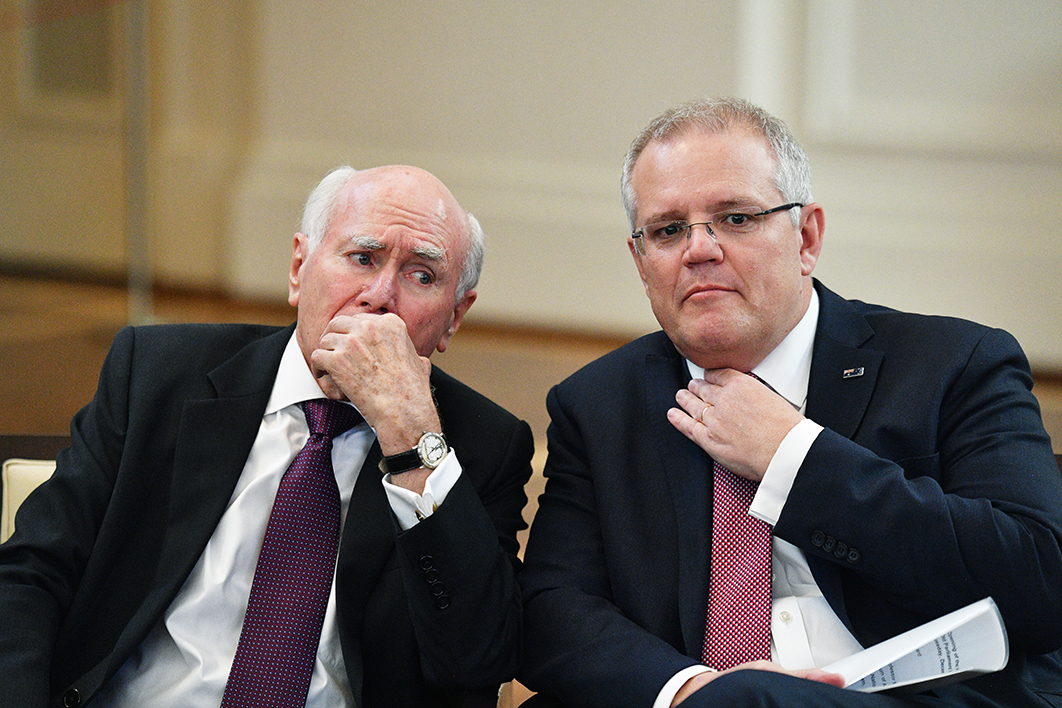 Around two and a half decades ago, the federal Liberal Party was ten years out of office and doing what oppositions tend to: being miserable, wondering what it stood for and pondering when it would ever take government again. The major philosophical division was between the dries and the wets.

The dries fancied a spot of economic shock treatment to jolt the country out of its post-recession malaise. The wets agreed, but only up to a point: you also had to consider the poor.

The senior players in the soul-destroying 1993 loss — leader John Hewson, along with Peter Reith and Peter Costello — had all been fully paid-up dries or at least more dry than wet. The wets included names such as Fred Chaney, Chris Puplick and Warwick Smith. Their leading light, Ian Macphee, had been pushed out of his Melbourne seat of Goldstein by an impeccably dry Victorian party president named Michael Kroger in a 1989 purge of the party left.

And John Howard? The failed former leader had been the dries’ leading light in the 1980s, but his old-fashioned social conservatism was considered a poor fit for the pragmatic, ideology-free Australian electorate. And his disastrous 1988 foray into Asian immigration served as a lesson in what not to do. No longer part of the leadership equation, he was said to be preparing for retirement.

In 2018 it’s a very different party, shaped most importantly by Howard’s 1996–2007 prime ministership. Hewson has reinvented himself as a relic of an old, progressive Liberal era. Costello was for a long time the great hope of the party’s left. Howard the 1980s small-government advocate ended up presiding over the biggest-taxing government in the country’s history. There aren’t really any dries anymore, but social conservativism is back in vogue.

And since 2001, when Howard employed astonishingly inflammatory rhetoric ­— at least by the standards of the time — race and immigration have been stand-by election tools for the Liberal Party. Although they were seen to have failed spectacularly in the 1980s, and for the first five years of Howard’s prime ministership were viewed as embarrassing baggage, in 2001 this side of Howard became emblematic of his connection with “ordinary Australians.” Howard was finally out and proud, and voters rewarded him with a third term in office.

Asylum seekers and immigration now lurk within the Coalition parties as potential election life rafts. Encouraged further by events in Europe and the United States, the self-proclaimed “base” — the rabid, highly ideological section of their supporters — demands every leader engage in this section of the culture wars.

The Liberals’ other, more recent, ideological tic involves climate change. It too can be traced to the electoral feats of an individual leader: in this case, Tony Abbott. Howard was the longest-serving prime minister since Robert Menzies; Abbott was the first federal Liberal opposition leader since Ming to contest consecutive elections — and win the second one. He did it by ferociously opposing Labor governments’ carbon-pricing policies.

Electoral success is the driver of political lessons learnt and modes of behaviour developed. Whether or not the cause and effect are accurately identified is moot.

Immigration and its accessory issues have always been politically sensitive. A technocratic consensus tends to suppress public discussion, which is what makes it so alluring to political insurgents. No doubt it works well in Liberal focus groups. But practitioners of qualitative research are also susceptible to political mythology, and as last month’s Victorian election suggested, ramping up the rhetoric about minority groups isn’t necessarily all it’s cracked up to be for a major party. (It’s largely forgotten that Howard also attempted, twice, to bring Sudanese refugees into his case for re-election in 2007.)

The ramifications of the obsession with opposing climate change action is more clear-cut: it’s just a dead end for the Coalition. They tie themselves in knots and appear, to the majority of voters, ridiculous.

Still, a party’s warts tend to be obvious when it’s doing badly, which in this country means lagging in the polls. It used to be the lot of opposition parties, but in our topsy-turvy post–global financial crisis world governments are usually in disarray while oppositions have a spring in their step. A little over five years ago the Labor Party was the empty vessel, losing elections in state after state, headed for defeat federally, its faults and contradictions clear to everyone, obsessing about “the base” and becoming further alienated from the mainstream.

Give it a few years and the boot will once again be on the other foot. •