A composer doesn’t often see people in the act of listening to music, writes Andrew Ford. WOMADelaide was an opportunity to take a look 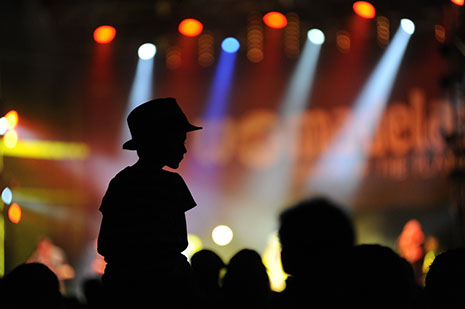 Sitting on the grass at WOMADelaide last weekend, too far from the stage to see much of the action, I became an audience watcher.

WOMADelaide, in case you don’t know, is the well-established Australian arm of the well-established international franchise WOMAD – that’s World of Music, Arts and Dance. This peripatetic festival was founded by Peter Gabriel in 1980 and had its first manifestation two years later in Somerset, its Australian counterpart materialising in Botanic Park Adelaide in 1992. Its mission is to juxtapose pop and traditional music from all corners of the Earth – West African rock stars and Central Asian throat singers, Burundian drummers and chanting Tibetan monks, slowly revolving Sardinian shepherds and fast-spinning Dervishes – and so successful has this mix been that it is now copied by other festivals. In Australia, indeed, formerly discrete folk, blues and jazz festivals have all broadened their focuses until they are more or less reflections of the WOMAD model.

This year’s WOMADelaide offered the great Malian griot Salif Keita, the Spanish viol player Jordi Savall (on this occasion exploring Celtic music), Indian singers Sudha Ragunathan (from the southern, Carnatic tradition) and Manjiri Kelkar (from the north), and, from Bosnia, Goran Bregović with his Weddings and Funerals Orchestra. There were also living legends such as Jamaican reggae star Jimmy Cliff and the South African trumpeter and band leader Hugh Masekela, as well as local acts including hip-hop outfit the Herd, blues guitarist Mia Dyson and perennial crowd-pleasers the Cat Empire.

But it was the audience that fascinated me. Looking around Botanic Park, one saw people of all ages and from most walks of life. It’s probably fair to assume that not many of them were in favour of whaling, but they did appear broadly representative of that large swathe of society in search of something other than commercial music.

The festival has seven stages spread around the park, up to four in use at any one time, and so it is possible to take in a complete hour-long performance or to graze, then move on. Some listened attentively, hanging on every plangent note of Adnaan Baraky’s Syrian oud or dancing with imaginative abandon to the Savoy Family Cajun Band. Some seemed to be there as cultural tourists: I noticed a few people get up and wander off after ten minutes of a performance by Ayarkhaan, three young women from the Russian Republic of Yakutia who made their Jew’s harps (the Yakut word is khomus) sound like a gathering tsunami. Perhaps it was too strange or too intense for the audience members who left, or perhaps they simply felt they could tick off Siberia and pass on to a different cultural experience. But, in general, people had a four-day party with great live music: they talked and danced and ate and drank; some even slept in the afternoon sun as Circolombia disported themselves noisily on Stage One.

The reason for my fascination is that I don’t often see people in the act of listening (or not) to music. I listen to recordings at home or in the car or on my iPod, and I hear most of my live music in darkened auditoriums. But I imagine that the people at rock concerts or jazz clubs or in classical concert halls are no different in their listening patterns to those at WOMADelaide. Some – experts and neophytes – will be there for the music alone, some for the atmosphere; some will have come out of curiosity, some from the desire to be seen.

This is why truthful musicians find it impossible to answer that persistent question, “Who do you make your music for?” with any answer except, “Me.” We don’t know who else will be listening; and we don’t know what else is happening in their lives. They might be worried or ebullient, looking forward with optimism or back with regret. They might have toothache.

Say you’ve come from a bad day at work. You hate your boss and want to kill him. You listen to Jordi Savall play his viola da gamba. Is that faraway look on your face the result of being transported by “Macpherson’s Lament,” or is the music simply providing the distant soundtrack to an intricately detailed revenge fantasy? Even when you can see the audience, you can’t really tell how they’re listening or what they’re really hearing.

One other thing struck me looking at the audience in Botanic Park, comprising, as it did, teenagers, the elderly, small children, and people of every age in between. Is this the first time in nearly seventy years – since the advent of rock & roll – that a lot of popular music is being appreciated by several generations? And if so, why does this seem like a good thing? •

Andrew Ford presents The Music Show at 10 am and 10 pm each Saturday on ABC Radio National. His broadcast from this year’s WOMADelaide festival can be heard here.