We have still not lived long enough 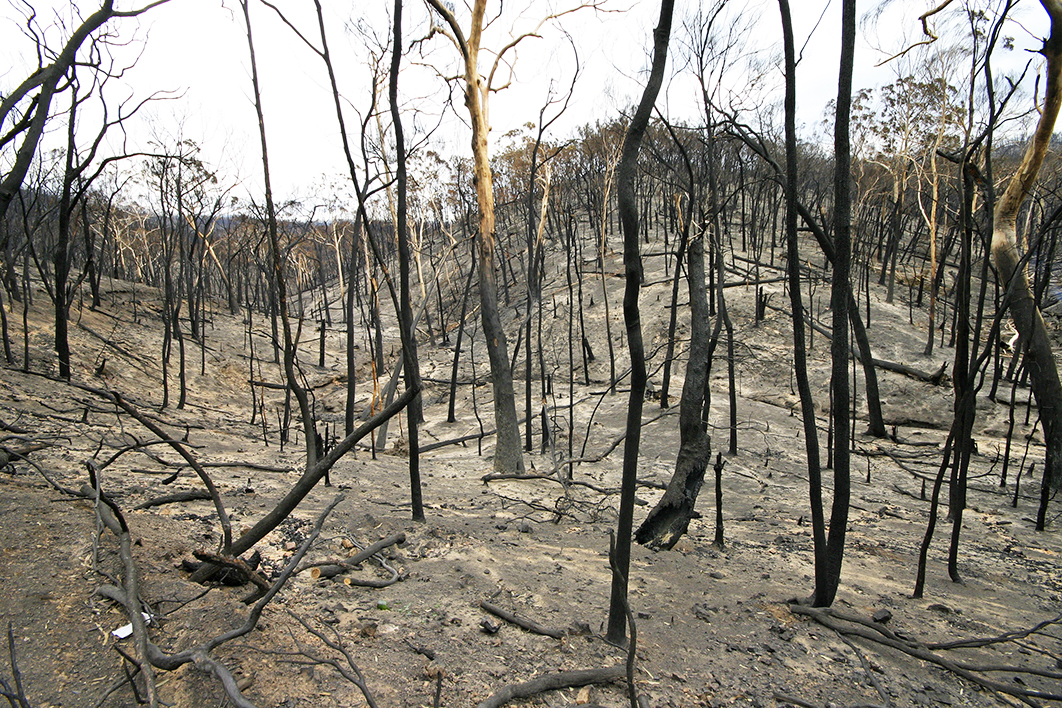 We should have seen this coming. We did see this coming. Yet we failed to save lives. We have still not lived long enough.

They had not lived long enough were the words that Judge Leonard Stretton used to describe the people who lived and worked in the forests of southeastern Australia when they were engulfed by a holocaust wildfire on “Black Friday,” 1939. The judge, who conducted an immediate royal commission into the causes of the fires, was not commenting on the youthfulness of the dead: he was lamenting the environmental knowledge of both victims and survivors. He was pitying the innocence of European immigrants in a land whose natural rhythms they did not yet understand. He was depicting the fragility and brevity of a human lifetime in forests where life cycles and fire regimes had the periodicity and ferocity of centuries. He was indicting a whole society.

In 1939 Australians were deeply shocked by what had happened in their own backyard. Rampant flame had scourged a country that considered itself civilised. As well as shock, people sensed something sinister about the tragedy and its causes. Judge Stretton tried to find the words for it in his fearless report. Of the loss of life at one sawmill settlement, he wrote: “The full story of the killing of this small community is one of unpreparedness, because of apathy and ignorance and perhaps of something worse.” The “something worse” that he tried to define was an active, half-conscious denial of the danger of fire, and a kind of community complicity in the deferral of responsibility.

There is something sinister also about this dreadful tragedy of 2009, although the character of it is different. Those of us who know and love these forests and the people who live in or near them are especially haunted. In 1939, some of the ignorance and innocence was forgivable, perhaps. “Black Friday” was a late, rude awakening from the colonial era of forest exploitation and careless fire use, and it demanded that people confront and reform their whole relationship with the bush. When the 1939 fires raged through the forests of valuable mountain ash (Eucalyptus regnans), settlers did not even know how such a dominant and important tree regenerated. In the seventy years since 1939, we have lived through a revolution in scientific research and environmental understanding and we have come to a clearer understanding of the peculiar history and fire ecology of these forests. We have fewer excuses for innocence. We knew this terrible day would come. Why, then, was there such an appalling loss of life?

Victorians live entirely within what the international fire historian Stephen Pyne calls “the fire flume.” It is the most distinctive fire region of Australia and the most dangerous in the world. When a high pressure system stalls in the Tasman Sea, hot northerly winds flow relentlessly down from central Australia across the densely vegetated south-east of the continent. This fiery “flume” brews a deadly chemistry of air and fuel. The mountain topography of steep slopes, ridges and valleys channel the hot air, temperatures climb to searing extremes, and humidity evaporates such that the air crackles. Lightning attacks the land ahead of the delayed cold front and a dramatic southerly change turns the raging fires suddenly upon its victims.

There is a further ingredient to the chemistry of the fire flume. Across Australia, eucalypts are highly adapted to fire. Over millions of years these trees have turned this fragment of Gondwana into the fire continent. But in the south-eastern corner – especially in the forests of the Victorian ranges – a distinctive type of eucalypt has evolved. Ash-type eucalypts (the mountain and alpine ash) have developed a different means of regeneration. They do not develop lignotubers under the ground like other eucalypts and they rarely coppice. They are unusually dependent on their seed supply – and, to crack open those seeds high in the crowns of the trees and to cultivate the saplings successfully, they need a massive wildfire. Ash-type eucalypts generally grow in even-aged stands. They renew themselves en masse. These particularly grand and magnificent trees have evolved to commit mass suicide once every few hundred years – and in European times, more frequently. Not all the communities that were incinerated in 1939 and 2009 were in or near the forests of ash, but many were, and the peculiar fire ecology of the trees is another deadly dimension of this distinctive fire environment. These are wet mountain forests that only burn on rare days at the end of long droughts, after prolonged heatwaves, and when the flume is in full gear. And when they do burn, they do so with atomic power.

The 2009 fires were “unprecedented,” as many commentators have said. They erupted at the end of a record heatwave and there seems little doubt that this was a fire exacerbated by climate change. But it is the recurrent realities that are more striking. For those of us who know the history, the most haunting aspect of this tragedy is its familiarity. The 2009 bushfires were 1939 all over again, laced with 1983. The same images, the same stories, the same words and phrases, and the same frightening and awesome natural force that we find so hard to remember and perhaps unconsciously strive to forget. It is a recurrent nightmare. We know this phenomenon, we know the specific contours of the event, and we even know how people live and how people die. The climate change scenario is frightening. But even worse is the knowledge that we still have not come to terms with what we have already experienced.

The Bureau of Meteorology predicted the conditions superbly. The premier issued a warning. Fire experts knew that people would die that day. History repeated itself with uncanny precision. Yet the shock was, and still is, immense. It is the death toll, and not the weather, which makes the event truly unprecedented.

The recommended survival strategy of “leave early or stay and defend your home” was a death sentence in these Victorian mountain communities on a forty-something degree day of high winds after a prolonged heatwave and a long drought. There is no identifiable “early” in this fire region on the fatal days. We understand why this policy has evolved and it has much to recommend it. It is libertarian; it recognises the reality that people prefer to stay in their own homes and defend them if they can; it seeks to minimise late evacuation which is so often fatal; it encourages sensible planning and preparation; and it has demonstrably saved lives and homes. It will continue to guide people well in most areas of Australia. But I fear that it has misled people in this distinctively deadly fire region to believe that they could defend an ordinary home in the face of an unimaginable force.

We need to be wary of “national” fire plans and to develop ecologically sensitive, bioregional fire survival strategies. We need to move beyond an undifferentiated, colonial sense of “the bush” as an amorphous sameness with which we do battle, and instead empower local residents and their knowledge of local ecologies. The quest for national guidelines was fatal for the residents of these Victorian mountain communities on such a day; it worked insidiously to blunt their sense of local history and ecological distinctiveness. Clearing the backyard, cleaning the gutters and installing a better water pump cannot save an ordinary home in the path of a surging torrent of explosive gas in the fire flume.

A “stay and defend” option is only realistic in such places and conditions if every property has a secure fire refuge or bunker. A bunker at the shire hall or at the end of the street is not good enough – people will die getting to it. I welcome the prime minister’s promise to rebuild these communities “brick by brick” – and I would like him to add: “and bunker by bunker.” Many people built bunkers in their backyards in the second world war and most, thankfully, were not used. But we know for certain that any secure bunkers built in these Victorian forest towns will be used in the next generation, and they will save lives. This is an appropriate challenge to the design and construction industries of the fire continent.

Fires inflame blame. Arsonists will be rightly condemned, but they will also distract us from addressing the reality of fires mostly caused by lightning. There were arsonists in 1939 and 2009 and there will be again in 2069; they are a sickening factor mostly beyond our predictive control. Water-bombing helicopters will again be promoted and in some areas they will be effective. The environmental and protective impacts of systematic control burning of our forests will be debated even more vociferously. Climate change will be correctly identified as a new factor in fire behaviour. But none of these policies or issues will ultimately save lives in these Victorian mountain communities on a holocaust day. Deep in the forests on Black Friday, 1939, with flames leaping kilometres ahead of the fire front, there was only one way to go – down. Well-built dugouts saved lives.

There was another meaning to Judge Stretton’s declaration that they had not lived long enough. He was saying that lived experience alone, however vivid and traumatic, was never going to be enough to guide people in such circumstances. They also needed history. They needed – and we need it too – the distilled wisdom of past, inherited, learned experience. And not just of the recent human past, but of the ancient human past, and also of the deep biological past of the communities of trees. For in those histories lie the intractable patterns of our future. There is a dangerous mismatch between the cyclic nature of fire and the short-term memory of communities. These bushfire towns – where the material legacy of the past can never survive for long – need to work harder than most to renew their local historical consciousness. The greatest challenge in fire research is cultural.

There is a perennial question in human affairs that is given real edge and urgency by fire: do we learn from history? Testimony from the 1939 and 2009 fires suggests that there is one thing that we never seem to learn from history. That is, that nature can overwhelm culture. That some of the fires that roar out of the Australian bush are unstoppable. As one fire manager puts it, “there are times when you have to step out of the way and acknowledge that nature has got the steering wheel at the moment.” It seems to go against the grain of our humanity to admit that fact, no matter how severe are the lessons of history. •

This essay won the Alfred Deakin Prize in the 2009 Victorian Premiers Literary Awards.

Tom Griffiths is Professor of History in the Research School of Social Sciences at the Australian National University and the author of Forests of Ash: An Environmental History (Cambridge University Press, 2001).