We need to talk about the Senate

Rather than trying to make the Senate more like the lower house, we could do it the other way round, says Peter Brent 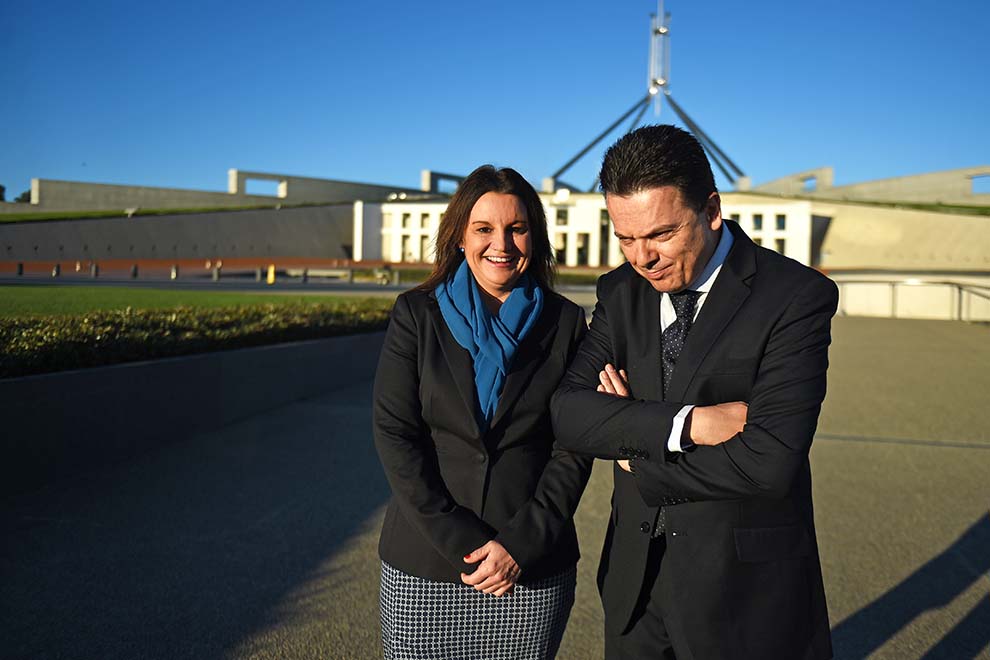 Not enough skin in the game? Senators Jacqui Lambie and Nick Xenophon outside Parliament House in May. Mick Tsikas/AAP Image

Malcolm Turnbull’s government, like Tony Abbott’s before it, and Kevin Rudd’s from 2008 to 2010, sits well short of an upper house majority. Once again, legislative success depends on extremely creative cat herding.

The recent craze of tut-tutting about modern politicians lacking the will for reform – oh, bring back the giants of old! – ignores the root cause of policy inaction: the upper house. The Abbott government’s first budget, whether it tickled your fancy or not, did not lack ambition. On the contrary. But its most adventurous elements were unable to get onto the statute books, thanks to the Senate.

Our upper house is too powerful, and incentives for the crossbench to obstruct governments are too great. Governments should, as a rule and within reason, be allowed to govern. Yes, even if it involves breaking election promises, because most of those past reforms beloved of the political class represented breaches of the spirit, and often the letter, of campaign assurances.

Yes, the majority of complaints about Senate obstruction today come from the same partisans who cheered when the chamber refused to pass Rudd’s electorally mandated emissions trading scheme. Hypocrites, like stopped watches and paranoid people, can be right sometimes.

Our Senate was devised before political parties as we know them existed. Quite deliberately, it was the most democratic and powerful upper house among the world’s parliamentary systems. Although it was chiefly designed to protect states’ rights, its behaviour has long been driven by what is perhaps the most ferociously cohesive two-party system in the democratic world.

For the first half-century, that didn’t much matter to governments. From 1901 to 1949, thanks to the “block vote” (which, like the chamber itself, seemed a good idea at the pre-two-party time), whoever was in power usually enjoyed a massive Senate majority. The Chifley government introduced the current proportional representation system in 1948 – and it came back to bite Labor the next time it formed government, in 1972.

As the decades roll on, major-party support continues its long-term decline. Large crossbenches are here to stay. There are few incentives for crossbenches to make life easy for governments; in fact, the motivation runs the other way.

Increasingly, oppositions automatically oppose just about any legislation that’s vaguely or potentially unpopular (national security being the main exception) and some things that aren’t. Crossbenchers, including the Greens, are also driven to seek attention, to draw applause for blocking controversial government measures.

It’s every party for itself in the Senate. Or, as we saw with the disintegration of the Palmer United Party in the last term, every person for his or herself.

Curtailing the Senate’s powers can only be done by referendum – which renders it a practical impossibility. That leaves the electoral system, chosen by parliament. A return to pre-1948 arrangements would be a bridge too far, but system that minimises the size of the crossbench, or ensures a government majority, could be devised.

But keeping minority voices out of parliament would, in the context of declining major party support, contribute further to widespread alienation from the political process.

Minor party representation is a good thing. We already have more than enough of the stifling, grey, rote-learned mediocrity that increasingly characterises our major parties. Perhaps the solution requires not fewer crossbenchers, but more – in both chambers.

Many countries employ proportional representation to elect members to their single national chamber or lower house. New Zealand is one on our doorstep.

In the Australian context, that motivation would apply to the behaviour of the same minor parties and independents in the upper house. Contrast that with our current Senate, with crossbenchers having responsibility for little apart from their own profiles, and few rewards for behaving constructively.

Proportional representation in the lower house could, by delivering responsibility to crossbench members in both chambers, rectify our rolling parliamentary logjam. With more colourful personalities in the House of Representatives, politics might become interesting again, which could reverse growing voter alienation.

Variety is the spice of life after all. •