Andrew Ford on the life and work of Lennox Berkeley 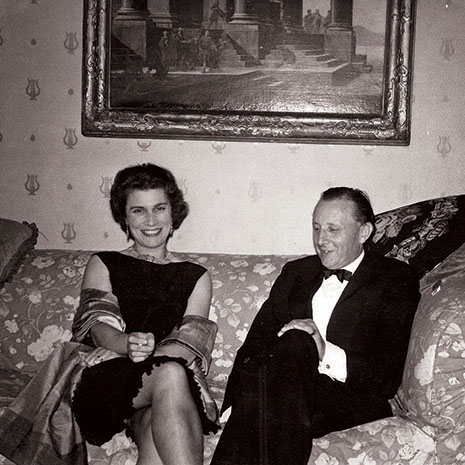 “I ALWAYS like his music very much when I hear it, the sound is invariably attractive, and the construction and craftsmanship perfect, and yet somehow I never find that I carry much away [with] me or that I’ve been much moved.”

This is the composer Lennox Berkeley writing in his diary on 4 February 1969 about the second symphony by his former pupil, Richard Rodney Bennett. And one knows what he means. But it has often occurred to me that when one artist speaks critically of another – especially when the criticism is regretful and kindly meant, as it was here – the faults found are those that the speaker suspects may be in his or her own work. Certainly Berkeley’s remarks about Bennett’s music sum up rather well my feelings about Berkeley’s.

I don’t believe I have ever heard a piece of Berkeley’s I didn’t like, and certainly not one that seemed poorly made. His terse, one-movement third symphony, indeed, strikes me as a very good piece indeed. I first heard it in 1974 in a concert conducted by Berkeley himself (his diary records that he found “the 5/8 passages horribly difficult to keep steady”). I own two recordings of it and have one of those in my iPod, which informs me, to my surprise, that I have listened to it six times in the last three years. Yet I can’t recall even the beginning of the piece – the impression it creates, yes, but not the actual notes.

This is not a fatal flaw, it seems to me, in either Berkeley or Bennett. I am just as happy – sometimes happier – to hear music that is honest and well-made as a piece that has memorable ideas and a flimsy construction. Anyway, lately I have been enjoying thinking about Berkeley and in a sense making his acquaintance thanks to two extremely good books. In Lennox Berkeley and Friends, Peter Dickinson has edited a typically wide-ranging collection of Berkeley’s writings – including reports to a British publication on the music scene in Paris, letters to his old teacher and friend Nadia Boulanger, reviews, talks, diaries, and interviews both with and about Berkeley.

The collection is always interesting, frequently engaging and occasionally quite touching, and Berkeley emerges from it a charming, cultured, slightly diffident man, surrounded by famous colleagues and unsure of his own talents. When he eulogises his great friend Francis Poulenc as one who “never sought to bring anything new to music other than the novelty of his own personality, and wrote unashamedly as he felt, paying little heed to musical fashion…” you know that he identifies with the French composer’s approach and that this is how he himself might hope to be remembered.

Born in 1903 into the English aristocracy and a Francophile to his core, Berkeley exhibits in his music a style and sophistication that often remind one of Poulenc. Indeed the delightful first movement of his Serenade for Strings (1939) might as well be Poulenc. Like the Frenchman, he was also a Catholic and a homosexual – a convert to the former and eventually, one might say, from the latter. For having led a gay life up until 1945 – in both senses of the word – Berkeley met his soul mate and she turned out to be a woman. Freda Bernstein worked in the music department of the BBC and was half his age, and one can imagine the amazement of his friends when, in short order, he married her.

In fact we don’t have to imagine it, because Tony Scotland has detailed this and much more besides in a luminous double biography entitled Lennox & Freda. Scotland, who was part of the Berkeleys’ household in the composer’s last years, charts the early lives of his subjects, their meeting, their marriage – it seems they were as astonished as Lennox’s friends – and their early life together as the parents of three sons, including the composer and broadcaster, Michael. If there is frustratingly little in the book about their later years, this is because domestic bliss isn’t much of a subject to write about.

Once again the composer comes across as enormously likeable, and perhaps this is the key to both books, the music and the man himself. For it is that circle of friends surrounding him – most of them artists, many of them rather famous – that tells us so much about Berkeley’s nature: sensitive, gregarious and modest “to a fault.” The friendships also help to put his music in perspective, and none better than that with Benjamin Britten.

Ten years Berkeley’s junior, Britten was a very close friend and, for a time, they lived together. But like everyone else in British music in the mid twentieth century, the older composer would always be overshadowed by this “marvellous boy.” Britten resembles no one so much as the poet W.H. Auden, a very great talent surrounded by lesser talents, befriending them, encouraging them, inspiring them but ultimately eclipsing them. All of which makes Lennox Berkeley music’s Stephen Spender.

Which is fine, and which reminds me that it’s a long time since I took down Spender’s Collected Poems from the shelf. How does that one about the pylons go again? •