Broadband might have divided the major parties before the election, but there’s not going to be so much difference now, writes Jock Given 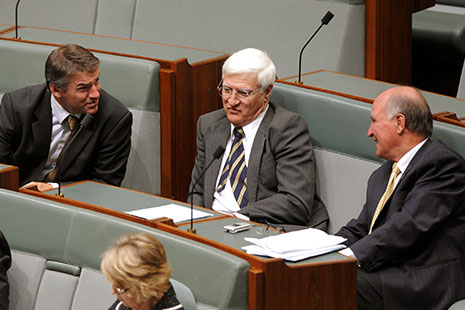 AS THE ALTERNATIVE prime ministers scout around for the numbers they need to form government, they’re finding broadband enthusiasts in every corner. One of the areas where the policies of the major parties were most distinct has started to sound not just bipartisan but multipartisan.

In a campaign where Julia Gillard and Tony Abbott came up with lots of similar policies that voters didn’t believe, the plans for broadband were absolutely credible, though radically different. Policy differences in many areas were narrowed; on broadband they were maximised. Spending vs saving, vision vs caution, public vs private, future-proof cable vs wireless-for-today.

Labor’s $43 billion plan for a state-owned fibre network was already under way and hardly a day went past without some member of the government turning up in a hard hat beside a hole in the ground and a roll of fibre. The policy was consistent with Labor’s opposition to the privatisation of Telstra through the Howard years, and was presented as part of Labor’s response to the global financial crisis and the failure of neo-liberalism. Linking it to improvements in education and health fitted neatly into Gillard’s 2010 pitch.

The broadband policy the Coalition invented in the last days of the campaign was very like the one it developed in 2007 once the long task of privatising Telstra was over but complaints about telecommunications services remained. It emphasised the private sector, and proposed to spend money to solve the problems that were most urgent or that the market was least likely to fix, especially in country areas. The fiscal modesty was part of a wider attack on Labor’s profligacy, preference for government control and failure to deliver on promises.

Liberal leader Tony Abbott was especially modest, choosing not to participate in the launch and then struggling to explain the detail. Peak download speeds? “If you’re gonna get me into a technical argument, I’m going to lose it, Kerry, because I’m not a tech head.” What spectrum would be used for the wireless network? “I’m no Bill Gates here.” But a few days later, the line was clearer: “I mean, all of the people who are using their Blackberrys or their iPhones for Facebook. All of the people who are sitting in cafes and hotel rooms doing their work, they’re all using wireless technology and we shouldn’t assume that the only way of the future is high-speed cable.”

That was until voters, according to the latest predictions, decided to give the balance of power in the Senate to the Greens and in the House of Representatives to independents and one Green. The Greens have broadly supported Labor’s broadband policy although they have criticised some of the detail and the process for determining it. Tasmania, where Labor’s National Broadband Network is starting, swung to Labor. For the three country independents in the House of Reps, telecommunications is not merely important, it is one of the touchstone issues that explain why they are independents rather than members of the National Party.

Living a long way from major cities, Bob Katter, Tony Windsor and Rob Oakeshott all tell stories in parliament about how much communications means to them and their constituents. Windsor remembers “as a relatively young person having to go out and untangle the party line, which the galahs or whatever had twisted up, or a branch had fallen across it.” Oakeshott says: “In this chamber and in this House, it is a very quick process to turn on your computer and to access any website anywhere you want in the world. Think of people such as year 10 students from Camden Haven High School who are still on dial-up. Think of the challenges that they face in a knowledge economy and trying to keep pace with students in communities such as where we all are now, discussing this issue.”

Growing up in Cloncurry, Katter remembers “a gentleman named Mr Dave Christerson. He started with absolutely nothing. He became a very successful cattleman, but the first thing he bought when he had a quid… was a set of Encyclopaedia Britannica. That opened the doors for us bush kids to see and to access a wider world, and broadband can provide exactly the same advantages for us if we are given it and if we are given it in such a way that it becomes a genuine service that we can afford and that we will get repaired when breakdowns occur.”

These personal experiences crystallised in policy when Telstra was privatised. Windsor sent a survey to his constituents; of the 6000 who responded, 98.6 per cent opposed privatisation. “It is quite obvious that people do not want Telstra sold,” he told the parliament. “It is not up to scratch… If [senators] are serious about taking on board the concerns of country people they should not support the sale of Telstra.”

Tony Windsor interjected: “They were playing Snakes and Ladders!” Katter responded: “I think there were other things that were played, but I will not go into that.”

West of the Great Divide, north of Goyder’s line, telecommunications was all about Telstra. A privatised Telstra was slower to repair services and could not be trusted to invest in new technologies in the areas where they might not be sufficiently profitable. “In my nearly thirty-five years in parliament,” said Katter, “until Telstra was sold I could only think of one example where the telephones were out for more than seven hours. It was because there were Telstra workers at every community point throughout North Queensland. They could get there quickly, assess the problem quickly and fix it up quickly. Since then we have had seven centres that have been out for two weeks – including half of Innisfail, a town of twenty-odd thousand people.”

Interrupted one day by the member for the seat of Deakin, Katter said: “This member, who is from Melbourne, is putting a proposition to this parliament that, after Telstra is privatised and Mary Murgatroyd’s phone breaks down in Julia Creek, they are going to fly a technician from Townsville or Brisbane to fix her phone. Is this the proposition that the honourable member is seriously putting to this House? Does he seriously expect a single person in this country to believe that proposition?”

On keeping pace with changing technology over time, Katter said, “when I had a cattle station right up in the middle of nowhere, we saw four changes of technology in a fifteen-year period. Not us, but some of our neighbours had copper wire and then that was replaced by DRCS [digital radio concentrator service, a technology developed by Telecom/Telstra for delivering telephone services using terrestrial wireless transmitters]. Then the DRCS was changed to satellite and some of the other stations have now been changed from satellite to HCRC [another terrestrial wireless technology]. I saw four changes of technology. I did not have to go on bended knee to the treasurer and say, ‘Please will you finance this new technology?’”

A special target in the debates about privatisation was the National Party, a party these independents had walked away from. In the parliament, it voted with its city-based Liberal coalition partner to privatise Telstra. Katter, whose father was a member of Labor before the split in the 1950s, praised the “courageous stand” taken by Barnaby Joyce, now the Nationals Senate leader, but “I said to him, ‘If you continue with your opposition then we will applaud you, and you will be a great hero throughout Queensland. If you don’t, you have raised our expectations and you will break our hearts.’ He broke our hearts. I do not give this speech to condemn him; at least he put up some sort of a fight, which is more than I can say for the other representatives of rural Australia in this place.”

Tony Windsor thought the National Party had been “led by the nose right through this Telstra debate.”

When Labor’s National Broadband Network was discussed and supporting legislation debated in parliament, Oakeshott said: “A need for an Australia-wide communications network that makes education equally accessible to regional and rural students is a no-brainer.” He also suggested that the federal Department of Broadband, Communications and the Digital Economy could be shifted to a regional location.

“If the policy settings are right, there is absolutely no excuse for that department to feel any impediment by being based in a regional location,” said Oakeshott. “And if the policy settings are wrong, wouldn’t it be some great tough medicine for a few people to feel what it is like to live in a regional area in regard to accessing the internet and communications services that so many other people take for granted in their everyday life? With a national rollout about to happen, I would ask the government to consider having those that are involved with that rollout located in a regional area. What a great message for Australia that would be.”

Windsor also supported Labor’s plan. “The movement to a national broadband network will, in fact, deliver the most important piece of infrastructure that we will see this century.” Structural separation of Telstra was “long overdue.” If the National Party was “led by the nose again and oppose this for reasons of city-based interests within the Liberal Party and corporate interests, we may well see a scenario where country Australia misses the opportunity to engage in a true national broadband arrangement.”

Katter is in a more complicated position because so many of his constituents will not be reached by the “fibre-to-the-premises” that is so central to Labor’s plan but will stop at 93 per cent of households and businesses. The rest will get “next generation” terrestrial wireless and satellite services, just as the Coalition has promised, although the detail of the technologies offered and timing may be different. Katter also understands that the challenge is an ongoing one, to keep pace with changing technology, not just a once-off battle to secure a supposedly “future-proof” network like the fibre access network Labor is staking so much on.

During Saturday night’s election coverage, cameras had been set up for live crosses all over the country but no one seemed to have communications facilities ready for any of the three independents in country New South Wales and Queensland who have become so crucial to the make-up of the national government, or for Andrew Wilkie in Hobart. Only the Greens’ Adam Bandt at the Melbourne Town Hall was catered for, just up the road from the offices of the National Broadband Network company.

The cameras are ready now as one of the most partisan issues of the campaign suddenly turns. Sea-changing retirees in Port Macquarie following their grandkids on Facebook, farmers in the “clean, lean, hungry country” of New England, remote graziers, miners and service suppliers in Western and North Queensland are all on a unity ticket with aspiring fibre pioneers in Hobart, web developers in Fitzroy and the Melbourne and RMIT academics along Swanston Street.

Jock Given works at Swinburne University’s Institute for Social Research.

Old political records keep being broken by the participants in this extraordinary election, writes Rodney Tiffen 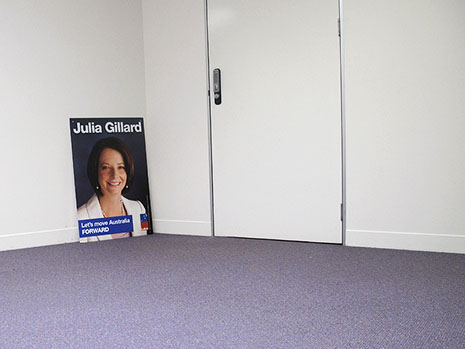