Australia’s history of international broadcasting is littered with mis-steps, writes Rodney Tiffen. Will the government’s current tendering process see it turn its back on the ABC, and embrace Sky, just as Rupert Murdoch’s stake in that company is set to grow? 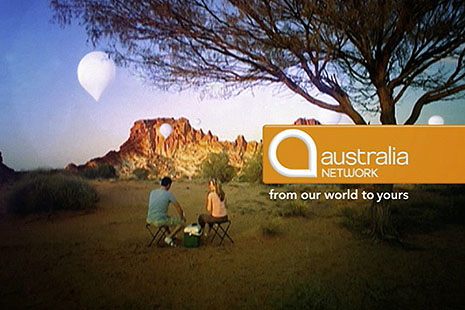 Australia Network (above) broadcasts into more than forty-four countries in the region.

TENDERS are open for a ten-year contract to operate Australia Network, the country’s international television broadcaster. Only two groups are likely to apply: the ABC, which currently operates the service, and pay TV network Sky News. The history of Australia’s overseas television service has sometimes been less than rational, but if the government did decide to dump the ABC, it would need measures that would prevent Rupert Murdoch’s News Limited from enlarging its stake in Sky News.

The service we now call Australia Network was launched in 1993 by the ABC in fulfilment of its charter obligation to provide international television. The ABC had been involved in international broadcasting almost continuously since the Menzies government launched Radio Australia as a short-wave broadcaster in December 1939. When a new ABC Act was introduced in 1983, turning the commission into a corporation, international television broadcasting was inserted as a charter obligation. But until the advent of Australia Television International, or ATI, in 1993, the ABC had only served this charter responsibility in the very weak sense of selling the odd program overseas.

The driving force for the service was ABC managing director David Hill. In Whose ABC?, the second volume of his authoritative history of the broadcaster, Ken Inglis shows how the Keating government made it clear that it would only support the proposed service if it included advertising, both as a means of financial support and to help showcase Australian enterprises in Asia. The decision was taken amid general antipathy to the ABC among members of the Keating cabinet, with the prime minister himself harbouring considerable doubts about the whole project. The government gave only a one-off grant of $5.4 million to launch the service.

Inside the ABC, the advent of ATI was greeted with some alarm. There were doubts about the implications of the first ABC service to be funded partly by advertising, about whether an already over-stretched and cash-strapped broadcaster could take on such a major new venture, and about the optimistic financial projections for the project. And all this occurred when the much bigger issue inside the ABC was its apparently imminent entry into pay TV.

ATI began operating in early 1993 on a shoestring budget. Soon its failure to attract advertising and its call on funds from elsewhere in the ABC earned the ire of Keating’s communications minister, Michael Lee, and the attention of a Senate committee. After a series of controversies and a growing sense of internal crisis at the ABC, the government promised in October 1995 to spend $6.2 million each year on the service for three years from July 1996.

By 1996, ably led by Michael Mann, ATI was operating within its budget and its revenue and audiences were increasing. A December 1995 survey suggested that its penetration of the Asian market equalled that of CNN and the BBC and was second only to Hong Kong Star Television.

In the lead-up to the March 1996 election, the Coalition gave guarantees that there would be no cuts to the ABC’s funding, a position it reversed with a vengeance once the size of the Keating deficit became official. In July 1996 it announced an immediate cut of 2 per cent in the ABC’s budget and foreshadowed that deeper cuts would be made in the next funding triennium. The government also announced that a public inquiry – to be conducted by businessman Bob Mansfield – would identify a “more focused” role for the ABC in line with its reduced budget. Perhaps contrary to the government’s expectations, the Mansfield Inquiry elicited an outpouring of positive public sentiment towards the ABC. Around 11,000 submissions were received – possibly the biggest public response to any government inquiry. The message of public support for the ABC was unequivocal.

When Mansfield reported in January 1997 his one nomination for a substantial funding cut was Radio Australia. Before the election, the Coalition had said that it was “strongly supportive of Radio Australia’s existing services and will ensure that they are not prejudiced or downgraded in any way.” Now, the communications minister, Richard Alston, accepted Mansfield’s recommendation that international broadcasting should be abolished.

Mansfield’s recommendation was politically opportune. It meant the government could punish the ABC financially without suffering the opprobrium of having forced cuts in popular services or programs. The decision also held some attraction for ABC management because the saving in transmission costs – not previously included in the ABC’s budget – would constitute a sizable proportion of the overall savings from cutting Radio Australia. Moreover, Radio Australia was still principally a short-wave broadcaster; in the age of FM broadcasting, CDs and satellite television, this was clearly a medium in decline.

Radio Australia might well have disappeared altogether if not for the fact that its complete abolition required legislation and the government lacked a majority in the Senate. Moreover, a furious public campaign followed the announcement. The repercussions abroad were probably also greater than the government had expected. (Papua New Guinea’s prime minister, Julius Chan, for instance, offered to give some aid money back to keep the service operating.) For a government already viewed in the region as being too soft on Pauline Hanson’s racist views, this was diplomatically uncomfortable. So Radio Australia was saved, but at a radically reduced level. Its budget – and hence its services and staff – were drastically cut and its major transmission site, near Darwin, was closed, eventually to be leased to an evangelical Christian broadcaster.

Meanwhile, the government – without any warning, and without preparatory work of any kind by the bureaucracy – had announced its intended privatisation of ATI. This initiative of the prime minister, John Howard, was a complete shock to the ABC and to the head of ATI. At the time, there were strong rumours that it followed suggestions made by a business figure close to the Liberal Party who was interested in buying the service. Mansfield subsequently endorsed this sell-off.

A year later it was announced that the successful tenderer was Kerry Stokes’s Seven network. The commercial attractiveness of the service was damaged almost immediately by the onset of the Asian financial crisis. Then, after the fall of President Suharto and with increased unrest in the region (most dramatically in East Timor), the government rediscovered the importance of international broadcasting. The major objection to Radio Australia for the previous two decades had been that its Indonesian language broadcasts upset the Suharto government, a backhanded testimony to its popularity in Indonesia.

By 2001, with its three-year agreement due for renewal, Seven had lost interest in the international service. It was closed for several months and the government called for new tenders. Several organisations made submissions, but the ABC was not among them. To his credit, foreign minister Alexander Downer, recognising there was only one organisation with the credibility and capacity to deliver a service of this kind, privately asked the ABC to apply. As a result, ABC Asia-Pacific was born, and began broadcasting at the end of 2001. Since that time, the government has continued to fund an Australian international television service – now known as Australia Network – through the ABC.

RECENTLY, however, foreign minister Kevin Rudd has called for a public tendering process. With the experience of a failed commercial foray into international broadcasting and the proven capacity of the ABC to deliver highly credible and consistent programming, it would have seemed safe to assume that the contract renewal would normally go to the national broadcaster. But the attractions of a switch to Sky News have been canvassed, at least in the Murdoch press. As far as I know, no other government in the world outsources its international broadcasting to a private company.

The major commercial contender, Sky News, was born following a brazen exercise of power by Rupert Murdoch. After protracted debate on pay TV policy, the government had decided to allocate two channels on a ten-channel satellite transponder to the ABC, one for children’s TV and a dedicated news channel. The government gave the ABC $12.5 million to develop the new services. In December 1994 a new organisation to run the news channel, AIM, was formed by the ABC in partnership with Fairfax newspapers. It engaged more than one hundred employees, including many distinguished journalists, created a digital news production centre, and worked out the logistical and institutional routines to run a high-quality, 24-hour dedicated news channel.

Then, on 31 July 1995, during a flying visit to Australia, Rupert Murdoch, angered by a report in a Fairfax paper, reversed the decision of the Foxtel officials in Australia, and said they would have nothing to do with the ABC service. The two other players in Australia’s infant pay TV industry followed suit.

The Keating government simply rolled over; there were some cries of pain from the ABC, especially the people facing unemployment. But Murdoch got his way and the venture was dead. The closure had nothing to do with the working of market forces; rather, it was an exercise of monopoly power that denied a market choice to consumers. Indeed, in the short term it was injurious to the pay TV operations that Murdoch and others were starting. In the early days, the industry was marked by low take up and high “churn” (cancellation) rates; a high-quality news channel would have been more attractive than the very cheap Sky News service that was cobbled together as a substitute.

Despite this inauspicious beginning, Sky News has developed into a valuable news outlet, a welcome addition to Australia’s media mix. If the government chose to go the commercial route, the major objection to Sky News would not be its performance thus far, but its current and possible future ownership structure.

At the moment Sky News is owned in one-third shares by Nine, Seven and Britain’s BSkyB. It is ironic – and far from helpful to Sky News’s case – that during the tender process Rupert Murdoch’s News Limited has moved from being the largest shareholder to total ownership of BSkyB. Amid controversy, the British government has approved Murdoch’s takeover attempt, which will mean News holds a full one-third of Sky News through BSkyB.

The record of Murdoch’s companies in international broadcasting is far from encouraging. Most infamously, in 1994, Murdoch kicked the BBC off his Star satellite service, which broadcasts into Asia, in order to curry favour with the Chinese government. At the time, Murdoch was keen to expand his business in China and the BBC had displeased Beijing with its independent reporting. Murdoch simply replaced the world’s most credible broadcaster with a music channel. Less well known is the fact that around this time, as he was trying to expand the availability of the Hong Kong–based satellite service he had bought, he gave guarantees to the Malaysian government as well. According to the Malaysian prime minister, Mahathir Mohammad, Murdoch promised that Malaysia could simply block any material it didn’t like on Star.

If the Australian government did give the contract to Sky News, Australia would not only be outsourcing its international broadcasting to a private operator, but would be outsourcing it to an operator that is one-third owned by a company that has blurred the line between commercial interests and independent news in its international programming. •