Will the Liberals ever learn? 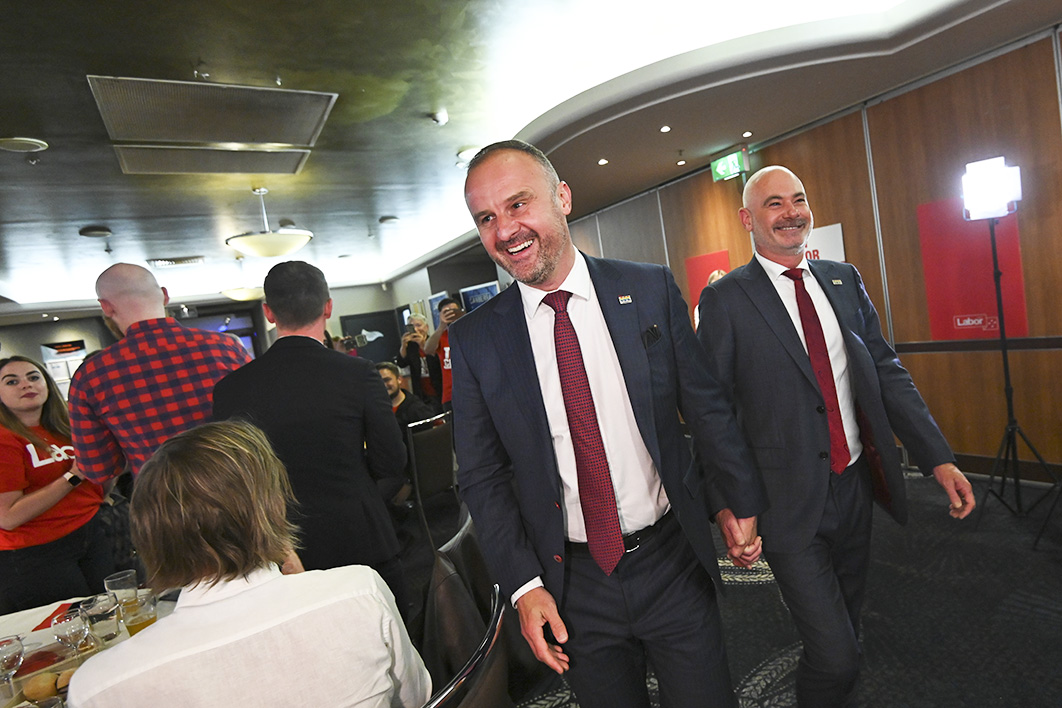 The ACT election was a historic win for Labor and an even bigger one for the Greens. Across the Tasman, the reverse: Jacinda Ardern’s Labour won a landslide victory so complete it no longer needs the Greens to govern.

Neither victory was a surprise, but their extent was. In the ACT’s case, that’s partly because media commentary (apart from Inside Story’s) ignored the only reputable opinion poll and last year’s federal election voting in assuming the Liberals had a strong chance of victory.

Covid-19 certainly played a role in both Labo(u)r victories: it has demonstrated the importance of good government as nothing else has since the second world war, and that gave the parties in government an unequalled platform to demonstrate their competence — or otherwise.

These two election outcomes add to the probability that Annastacia Palaszczuk will receive a similar endorsement from her voters on 31 October — and that Donald Trump will be turfed out for his incompetence in handling the virus when Americans vote four days later.

ACT chief minister Andrew Barr’s handling of the Covid-19 crisis was smooth and successful. The city has had only 113 cases, mostly acquired overseas. No cases have been diagnosed for three months. Some restrictions remain, but the crisis has been handled with less panic and more pragmatism than in most of Australia.

It has allowed a leader whose popularity was wearing thin to re-establish himself in the eyes of his electorate. In the televised leaders’ debate two weeks ago, Barr came over well: warm, reassuring, an apparently safe pair of hands. By contrast, Liberal leader Alistair Coe campaigned by staging a series of juvenile stunts — in the final one, pulling a rates notice out of an esky to publicise his pledge to freeze rates. He seemed to underrate the intelligence of Canberra’s voters.

The biggest winners were ACT Greens leader Shane Rattenbury and his team. After two disappointing territory elections, the Greens have surged back, winning close to the vote they get there at federal elections. They have earned the right to take on a much bigger role in the next Labor–Greens coalition government.

That government, which began back in 2001, will continue until at least 2024, matching the twenty-three-year federal government of Sir Robert Menzies and his successors from 1949 to 1972.

In net terms, the Greens have gained either three or four seats. The Liberals have lost either two or three, and Labor could end up with no net change, or a loss of one or two seats.

(Yes, these are different from the figures Antony Green gave last night in wrapping up the ACT’s election coverage. Antony is usually excellent, and I can only assume that last night he was on screen so much that he didn’t have time to take a close look at the complex preference distributions circulated by the ACT Electoral Commission, showing provisional results based on votes cast electronically in pre-poll booths.)

Because of Covid-19 fears, even the Covid-free ACT had its election shaped by the virus. Everyone was urged to vote at one of thirteen pre-poll centres, and two-thirds of the voters did so. Almost all of them voted using an electronic screen, which meant their votes could be counted and preferences distributed and posted by 9pm.

The Liberals’ position will improve slightly today and in coming days as postal votes and pre-poll votes on the traditional paper ballots are counted. But this is where the votes ended up last night in the ACT’s five Senate-style electorates:

Brindabella (outer south, district of Tuggeranong): was Liberals three, Labor two; now two-all with one in doubt. The three-party swing against the Liberals was 7 per cent, mostly to the Greens. Liberal MLA Andrew Wall’s seat has been lost to either Labor or the Greens. Last night Labor led by thirty-five votes or just 0.08 per cent.

Murrumbidgee (middle south, Woden and Weston Creek): was Liberals two, Labor two, Greens one. Despite Liberal expectations of gaining a third seat, thanks to a favourable redistribution and the retirement of the Greens MLA, those numbers remain the same. Emma Davidson will be the new Greens MLA, replacing Caroline Le Couteur, while Labor MLA Bec Cody lost her seat to running mate Marisa Paterson.

Kurrajong (inner suburbs, north and south of the lake): was Liberals two, Labor two, Greens one; now Liberals one, Labor two, Greens two. As in last year’s federal election on the same turf, the Greens outpolled the Liberals after preferences. At the cut-off point on the provisional preference distribution, the Greens’ second candidate, Rebecca Vassarotti, had 15.2 per cent of the vote to 13.3 per cent for Liberal MLA Candice Burch. That’s too big a gap to make up on the count remaining.

Ginninderra (middle northern suburbs, Belconnen): was Liberals two, Labor three; now Liberals one, Labor two, Greens one, and one in doubt. This is where the Coalition hoped its veteran one-time leader, Bill Stefaniak, could take a seat from Labor for his Belco party, based on resentment that Belconnen has been left out of the Barr government’s largesse. Not so: instead, the Greens’ Jo Clay has claimed one seat, probably from the Liberals, but possibly at the cost of Labor attorney-general Gordon Ramsay.

Yerrabi (outer north, district of Gungahlin): was Liberals two, Labor three. Now Liberals two, Labor two, Greens one. Alistair Coe’s own electorate was the only one to record a swing to the Liberals, and a strong one at that — but still not big enough to claim the last seat. Instead the Greens’ Andrew Braddock has unseated the capital’s first Indian-Australian MLA, Deepak-Raj Gupta.

On first preferences, the night finished with Labor on 38.4 per cent, the Liberals 33.1, the Greens 13.9 per cent and others 14.7. But whereas the preferences of the “others” in 2016 largely favoured the Liberals, this time they have spread more evenly among the three biggest parties. Crucially, that has lifted the Greens’ share of the three-party vote to 18 per cent — in a voting system where 16.67 per cent is the threshold to win a seat.

Hence the dramatic rise in their representation from two seats to five or six, almost a quarter of the Assembly. It still fell short of the 20 per cent the Greens won at last year’s federal election, but it makes the partnership with Labor less unequal, and lifts them to a new level of importance in the government.

After patiently biding his time as the Greens’ sole minister since 2012, Rattenbury hinted last night that he will demand a bigger share of portfolios: particularly planning, where Labor’s pro-development policies have put it offside with resident groups. Barr might well be happy to pass on that hot potato to his coalition partner.

As in New Zealand, a new term will intensify demands on the government to implement Labor’s stated goals of looking after those worst-off: something the Barr and Ardern governments have both failed to do. Coe had promised, if he won, to appoint former Labor chief minister Jon Stanhope — one of Barr’s sharpest critics — to chair an inquiry into poverty in the ACT. Barr would be well advised to try to make peace with his old boss, and invite him back inside the tent to help shape policy.

A dark fiscal cloud overshadowing the coming term will be the government’s pledge to build a second tramline from the city to southern Canberra, in the wake of its popular but expensive tramline to Gungahlin in the outer north. Canberra has been designed for cars, not trams, and the new line will be costly both to build and to operate. Initial estimates are around $2 billion, in a city of 430,000 people.

The impact of building something you can’t afford is that everything else has to make room for it, and therefore becomes a lesser priority. Canberra’s rates and taxes have risen, and its service levels in many areas have fallen. Labor’s 2016 plan to redevelop Canberra Hospital was recycled as its plan for the 2020 election.

So why weren’t the Liberals able to take advantage of this? On Saturday night, retiring MLA Vicki Dunne blamed the failure on the way Covid-19 has put governments centre-stage in controlling the agenda. With respect, that hardly applies in Covid-free Canberra. Part of the Liberals’ problem, surely, was that their young, stunt-addicted, ultraconservative leader did not come across as a credible chief minister for a place like the ACT.

In Massachusetts, the Republicans keep winning government because they put up liberal leaders who fit the state’s political culture. In Victoria, the Liberals have won just one election this century, and that was under the liberal Ted Baillieu. In New South Wales, they have won three elections in a row under three moderate leaders. It’s not a hard lesson to learn; it’s just too hard for the conservative wing of the party to accept. And in the ACT, the conservative wing rules.

Counting on Thursday effectively confirmed that the Greens have relegated the Liberals to third place in the central electorate of Kurrajong. Rebecca Vassarotti, a community activist with wide experience, is set to replace Liberal MLA Candice Burch in the Assembly. The Greens recovered lost ground in the first preference count, while Vassarotti expanded her lead in the count after preferences to 786 votes.

In Ginninderra (Belconnen), after preferences, Liberal lawyer Peter Cain maintains a ninety-eight vote lead over Labor’s attorney-general Gordon Ramsay. Labor still hopes it can hold the seat, as it is doing better on the postal vote count in Ginninderra than elsewhere. But it has to spread those votes between three candidates, whereas the Liberals only have two in the race.

The southern seat of Brindabella (Tuggeranong) remains on a knife-edge. At the end of Thursday’s counting, Green candidate Johnathan Davis was twenty-three votes ahead of Labor’s Taimus Werner-Gibbings. But between them is Andrew Wall, the Liberal MLA whose seat one of them will take. Wall can’t win the seat, but if Labor can overtake him when postal votes are distributed, it believes his preferences could then lift its man over the Green, and secure him the final seat. Possibly — but first he has to overtake Wall, and in Brindabella the Liberals have outpolled Labor in postal votes.

The first preference count is now almost over and the deadline for postal votes to be received ends at 5 pm tonight. The roughly 20,000 postal votes are being scanned into electronic form, and the computer will distribute their preferences on Saturday to give us the final result.

On the current count, Labor would win ten seats (down two), the Greens six (up four) and the Liberals nine (down two).

Greens members voted on Wednesday night in favour of remaining with Labor in a coalition government. This is expected to see them have two ministers in the next government instead of one, with leader Shane Rattenbury in a key portfolio.

Tim Colebatch is a regular contributor to Inside Story, a long-time Canberra resident and a former economics editor and columnist for the Age.