“Yes, I know we disobey orders. But what else can I do?” 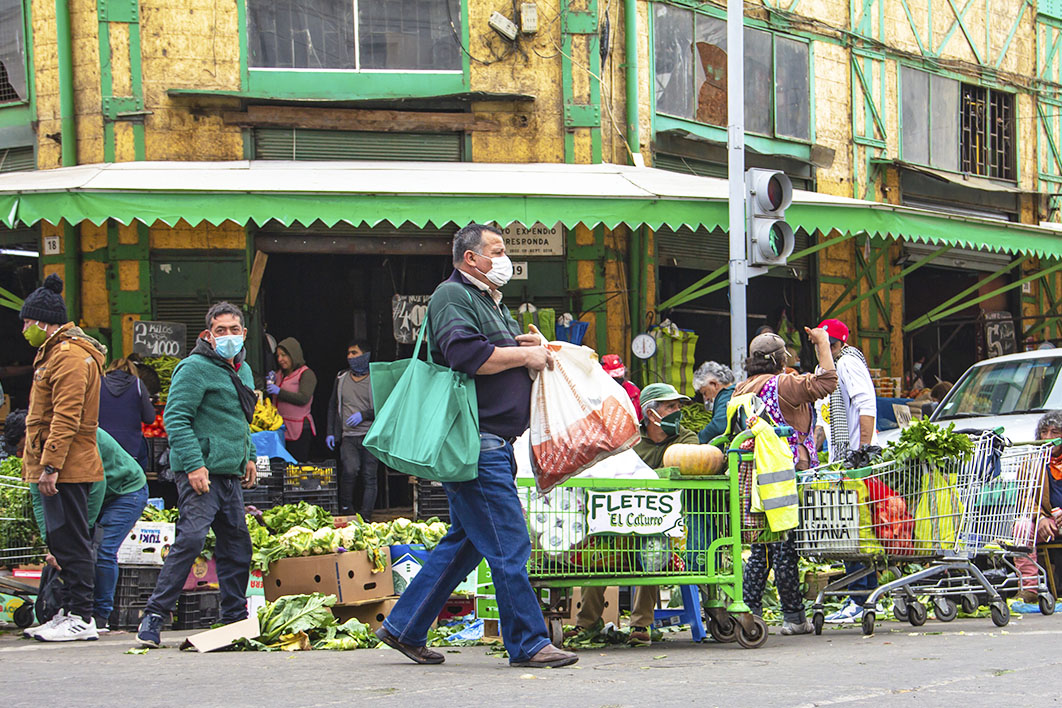 Just two years ago, on a sweltering day in the Peruvian capital, Lima, Silvana was telling me that she couldn’t remember how long she’d been selling pineapple juice on Miguel Grau Avenue. “I was perhaps fifteen? I tried to do something else, but this is the only thing I can do.” I wonder, now, how she is coping during the Covid-19 pandemic, if she is safe. It will be a long time before I can visit in person, so I call.

Her number is not connected. Perhaps she has changed it; I hope so. The pandemic has been disastrous for workers like Silvana in Latin America’s informal economy — the bread sellers on the streets in La Paz, the cardboard collectors in Buenos Aires, the domestic workers in Santiago, the fruit sellers on the streets of Lima — and she will have encountered many hardships since we last met.

The coronavirus arrived in Latin America on 26 February 2020 when Brazil confirmed the first case in Sao Paulo — a sixty-one-year-old man. The region is currently a global epicentre of Covid-19.

The pandemic struck Latin America and the Caribbean at a difficult economic time, with the region already experiencing low economic growth. The Economic Commission for Latin America and the Caribbean, or ECLAC, now projects a 9.1 per cent drop in the gross domestic product across the region, which is home to more than 652 million people. “Preliminary estimates so far indicate that we are experiencing the worst economic recession since we started recording it,” says Fabio Bertranou from the International Labor Organization’s South Cone of Latin America section. A recent report from the US Congressional Research Service notes that “the decline in economic growth in 2020 is expected to exacerbate income inequality and poverty throughout the region.”

In the region’s largest sector, informal work, the effects of this health and economic crisis are particularly brutal. Nearly 140 million people — about half the working population — make up the informal economy in Latin America and the Caribbean, and present what Bertranou describes as “a huge structural labour challenge.” These workers have “low or no labour rights, and lack social security, occupational safety, and health and unemployment protection.” The only way out, he says, is to achieve the ILO’s goal of promoting decent and productive work for all people.

This goal is particularly daunting now, though. In May 2020, the ILO estimated that in Latin America and the Caribbean 89 per cent of informal workers would be severely affected by the pandemic; and it is likely that the informal economy will only increase in the near future. “We can speculate that when confinement measures are relaxed and economic activities open up, informal employment will increase considerably again,” says Bertranou. To minimise this problem, the ILO is “providing technical assistance to governments, workers’ organisations and employers.” The final objective, he says, is “to transition to the formal sector of the economy.”

Peru, home to approximately thirty-three million people, has one of the largest informal economies in Latin America. At the time of writing, the country also has one of the world’s highest Covid-19 mortality rates, with over 45,000 deaths.

“Plague has been throughout history one of humanity’s worst nightmares,” Peruvian writer and 2010 Nobel Prize winner Mario Vargas Llosa wrote in March 2020. And in his own country, the pandemic has indeed sparked nightmarish human and economic conditions.

The Peruvian formal economy has lost over six million jobs, according to the country’s National Institute of Statistics and Informatics. At the same time, the informal economy has bloated. “Millions of Peruvians who have lost their jobs have been forced to work on the streets,” says Armando Chunga, president of the Association of Street Vendors of Metropolitan Lima. There were approximately 300,000 street workers in metropolitan Lima before the pandemic hit. “Now there are more than 900,000,” Chunga says. “And around 10 per cent of them are infected.”

Born and bred in this city of nine million, Chunga fears the virus. In the streets of Lima’s historic centre, he sells “clothing, leggings, track pants and t-shirts.” He fears for his life every time he hits the streets, he tells me. When we speak on a Saturday evening, he is coming back from fourteen hours of street work. “In this pandemic, when we go to the street, we are risking our lives,” he says. “But my family depends on me.”

And he is not alone. In Peru, 70 per cent of households depend on the informal economy. It is the economy of the poor, and serves not only those who sell but also those who come to the streets to buy — mostly low-income people.

Lima’s Central Market, for example, has been a source of affordable food since its foundation in 1850. But in May last year, the Municipality of Lima closed it after fifty-nine traders tested positive for the coronavirus. This came after former president Martín Vizcarra described Lima’s food markets as one of the primary sources of contagion. After enormous public pressure, however, the market opened up again only a few days later. “All the evidence suggests that informal food sellers are playing a key role in food security in general and for the urban poor in particular,” says Caroline Skinner from the global organisation Women in Informal Employment: Globalizing and Organizing. The closure of the markets, she tells me, could “lead to increased food insecurity, poverty and exclusion.”

But while those who sell essential products can, for now, continue to work in the markets and on the streets, the majority of informal workers, like Armando Chunga, trade in non-essential goods and have not been so lucky. Chunga says that street vendors and other informal workers are concerned with the rising level of violence they are suffering at the hands of the police. “They are using the pandemic as an excuse to harass us,” Chunga tells me. “The police brutality against us is on the rise.”

Chunga’s association has denounced the police treatment of vendors, which includes arrests and confiscation of merchandise. “According to our information, more than 21,000 people, including street vendors and other workers in the informal economy, have been arrested,” says Chunga. “They have been arrested for not staying at home, but if we stay at home, where will our food come from?”

It’s a problem that extends well beyond Lima. In Chile’s capital, Santiago, the coleros are also struggling. Literally translated as “those in the queue,” coleros are street vendors found around the margins of the established city markets. They’re on the streets, without official permits, displaying their merchandise on blankets while keeping an eye out for the police.

Jorge Vitta is the president of the Independent Workers’ Union of Santiago. “We sell products that are not essential,” he tells me. “We sell whatever.” On one day, he says, he might sell socks, on another, body cream, stationery or hats. “Yes, I know we disobey orders. Yes, we don’t have permission. But what else can I do?”

In the Chilean city of Ovalle, 400 kilometres north of Santiago, the city market has been a source of food security and affordable products since 1986. Ovalle is situated in one of the most impoverished regional zones of Chile. “To close the market, where a large number of farmers sell their products, would have caused a major problem,” Pia López Eccher, media officer at the city’s council, tells me.

Ovalle, the birthplace of internationally celebrated writer Luis Sepúlveda — who died of Covid-19 in April 2020 — is among the Chilean cities worst affected by the virus. Many residents blame street vendors for the sharp spike in cases in mid August 2020, after Ovalle was flooded by street vendors from the neighbouring cities of La Serena and Coquimbo after both went into lockdown at the end of July.

Street vendors feel stigmatised as spreaders of the virus, but Dr Carlos Flores, an epidemiologist from Ovalle, tells me, “There is no medical evidence that the visiting street vendors caused the surge of cases in the city. My study shows that most cases emerged from inside the city.”

There is concern and anger among street-vendor organisations across Chile — and throughout Latin America — that authorities are using the pandemic to stigmatise and bully an already marginalised group of workers. “To demonise us is not new,” says Vitta. “We have always been associated with delinquency, with drug trafficking, and now we have been accused of spreading the virus.”

Of the two billion informal workers worldwide, just over 740 million are women, and the pandemic has hit them hard. The ILO reported in May 2020 that most lack access to social protection and don’t have sufficient savings to deal with the crisis. Many are domestic workers who “work for private households, often without clear terms of employment, unregistered in any book, and excluded from the scope of labour legislation.”

In Latin America, between eleven and eighteen million people are employed as domestic workers, 93 per cent of whom are women, according to a 2020 report from UN Women, ECLAC and the ILO. The report notes that more than 77 per cent of female domestic workers are informal, working in precarious conditions and without access to social protection.

Frequently, domestic workers must travel a long way to reach their employers’ home. “When I was working, it took me around one and a half hours to get to work,” Cristina Quintanilla tells me. Quintanilla lives in La Pintana — an impoverished suburb of Santiago. “I had to leave home at 4am and take two buses to get to my employers’ home at 5.30am.” Her employers live a world apart from La Pintana, in Las Condes, one of Santiago’s wealthiest suburbs.

Like Peru, Chile has been severely affected by Covid-19. And since March 2020, Santiago has been in and out of different stages of lockdown. “I can’t go to work now, but la señora told me she would employ me back after the pandemic,” Quintanilla says. Only time will tell if “the madam” — as domestic workers usually refer to their employers — will honour her promise. After all, I’m told by Chile’s Private House Workers’ Union, thousands of domestic workers have already been dumped by their employers during the pandemic, a considerable number of them fired because their employers saw them as a possible source of contagion.

According to the union, approximately 300,000 women are employed as domestic workers in Chile. A spokesperson from Chile’s National Coordinator of Private Home Workers’ Organizations tells me that the Covid-19 crisis has left more than 120,000 of them out of a job, “in a state of total vulnerability” with no state social protection.

For people who work in the vast informal economy of Latin America and the Caribbean, the pandemic has added to their daily human drama and further revealed their abandonment and marginalisation. As the ILO notes, “Not working and staying home means losing their jobs and their livelihoods. ‘To die from hunger or from the virus’ is the all-too-real dilemma faced by many informal economy workers.”

“From the crack of dawn to the end of the day — every single day — we roam the streets selling what we can sell,” Armando Chunga tells me in an exhausted voice. “You know, we are fathers, mothers and children, like anybody else — we just need to work.”

Antonio Castillo is a Latin American journalist who teaches journalism at RMIT University in Melbourne. He is the author of Journalism in the Chilean Transition to Democracy, co-author of Cosmopolitan Sydney, and co-managing editor of Global Media Journal.