A good day for democracy

Boris Johnson the showman needs to become a statesman. Can he? 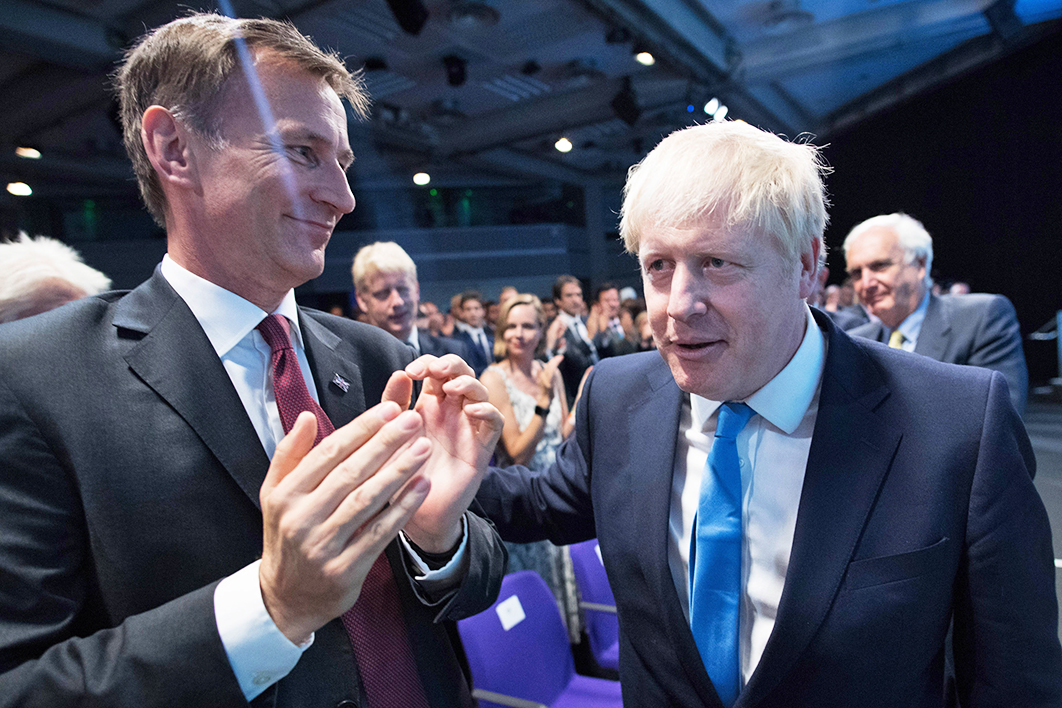 Boris Johnson (right) with the man he defeated for the Conservative Party leadership, foreign secretary Jeremy Hunt, after the outcome of the ballot was announced in London yesterday. Stefan Rousseau/EPA

A tarnished figure, unfit to be prime minister, whose honeymoon is over before he even lands the role. This damning verdict on Boris Johnson in swathes of the media, European and American as well as British, has been endlessly rehearsed during the two-month slog between Theresa May’s resignation and his capture of the top job. Overlooked amid all the venom is that this interlude, in its grotesque length, is one more symptom of the British polity’s debasement.

At last the finale — which is also a prelude to a new crunch — is imminent. Johnson’s 66–34 per cent win over Jeremy Hunt in the Conservative Party leadership run-off, announced on Tuesday morning in London, is followed at Wednesday lunchtime by May’s last House of Commons question time. Then come Boris’s anointing at Buckingham Palace, the limousine ride to Downing Street, and the obligatory pieties on the steps of Number 10. In Britain, rituals ever run smooth while policies (from Brexit downwards) ever mean pratfalls. Go figure.

Now that the ball has indeed “come loose from the back of the scrum,” as Johnson wittered in 2013, and this “great, great thing to have a crack at” is almost in his hands, what else awaits but satisfying confirmation of that verdict?

The fifty-five-year-old’s charge sheet is long. His sacking from the Times for embellishing an article with an invented quote from his godfather, an Oxford historian. His taped conversation humouring an old schoolmate (a fellow Etonian, inevitably) who plans to beat up a journalist. His years painting the European Union in lurid colours for the Telegraph and Spectator, seducing credulous minds (it is said) to fatal pro-Brexit effect. His affairs as a faithless husband, and his lying about one costing him his shadow cabinet place. His parodic language, as lovingly rumpled as his blond moptop, that strays towards insult of minorities. His woeful stint as foreign secretary and affinity with Donald Trump. His criminally bad book about Churchill, one might add (Shakespeare is forthcoming). And these are just the headlines.

Even in an era of brazen politicians, this bounder’s CV (to use Johnson’s own picaresque argot) has seemed prohibitive. That it has proved a stepladder rather than a barrier testifies to the upside-down world inaugurated by the UK-wide vote to leave the European Union. The vacuum of leadership and direction since then has sent emotions as well as democracy haywire. The feeling of malaise now feeds the despairing hope of Tory members, and more widely of Brexiteers, that Boris’s “can do,” “guts,” “will,” “drive,” “optimism,” and “do or die” resolve will at last honour the 2016 vote.

But personality politics of this kind horrifies anti-Johnsonites and supplies the other leg of their scathing verdict. So politically divided is Britain, so vulnerable its global status, so economically perilous the threat of a no-deal crash out of the EU, so tight the parliamentary arithmetic, that the madcap man-child Boris is the last type in charge the country now needs.

Look around and shudder, continues the prosecution. Iran’s bold seizure of a British-flagged merchant ship in the Persian Gulf, compounded by London’s lack of foresight and infirm response, is the tip of Britain’s foreign policy drift. After the European Union, a future squeezed between a wayward United States and an overbearing China beckons. A hard Brexit will deepen cross-border tension with Ireland and refuel Scottish separatism. A currency already listing amid Brexit uncertainty, yet bringing no improvement in the alarming trade deficit, faces a whirlpool. Domestic social problems — housing, health and elderly care, education, prisons, transport — are neglected, ill-funded or poorly managed. A wrong ’un in his own right, the blustery, attention-deficient Johnson is set to worsen already grave problems.

This swingeing critique reaches far inside his own party. Johnson’s arrival is already provoking resignations among ministers, including chancellor Philip Hammond, opposed to no-deal or to Brexit in any form (the categories are still blurred in practice). In depriving him of even the wafer-thin working majority inherited from May, their departures augur more of the grinding procedural combat that saw the deadlocked chamber vote down May’s deal with the EU three times, though without endorsing an alternative.

Johnson promises to break the logjam. He is adamant that, by agreement or not, Britain will exit on 31 October — the date decreed by the EU after the British government missed its initial deadline — which in turn became a pledge crucial to his leadership win and chances of outflanking Nigel Farage’s insurgent Brexit Party. With the domestic and European arms of his challenge so intertwined, he will need agile diplomatic skills at Westminster as well as among an understandably sour EU. Yet the repertoire needed in each is subtly different: hand-to-hand versus jaw-to-jaw.

In the House of Commons, a fiercely motivated ad hoc coalition will use every means — including seizing the legislature’s timetable — to prevent a no-deal Brexit. The numbers are there to stall the process. But 31 October is the current default: to reverse course, the rebels need to overturn MPs’ decision in 2017 to invoke Article 50 of an EU treaty that compels departure. Short of that, the EU is free to say “nee, c’est fini. te vas, Tschüss…” And who could blame it?

In any case, the EU’s own half-decade leadership carousel, the latest particularly bruising, leaves scarce appetite for more negotiations with London. A government now led by a man committed to (or trapped by) his offer of a quick Brexit further limits negotiating room. Any such narrow ground (a term once used to characterise the Northern Irish dispute) may yet lie in a codicil to the withdrawal agreement that amends the contentious “backstop,” which, as it stands, guarantees a frictionless Irish border at the cost of UK sovereignty. Add other small concessions, eased by frank personal contacts across the divide, and let Boris present the deal as diplomatic triumph.

That might prove too much for either Johnson or the EU to swallow. Much depends on how the shock of highest office changes him. So far, he lacks the statesman’s art of dousing as well as arousing fervour among his supporters, and indeed of successful negotiation. The ambiguous rationale of his no-deal case is relevant here. Only such a threat will shift Brussels’s position, his backers argue, and thus facilitate compromise — but many have come to believe in it for its own sake, embracing “very well, alone” as a positive strategy. This is just one side of Britain’s mutual radicalisation into hard leave and remain camps: May’s most harmful legacy, if not hers alone.

The tribal stand-off is the undertow of every Westminster discussion. Tories are fixated on avoiding a general election before Brexit is done, while Labour demands one. Outright pro-remain parties — Greens, Welsh nationalists, and Liberal Democrats (led by Jo Swinson since their own leadership election this week) — have reached a single by-election pact to dislodge a sitting Tory, which may be a harbinger. They want a second referendum to cancel the first, the term “confirmatory vote” having succeeded “people’s vote.” In Scotland, the priority is different, as the nationalist government is eager to use the English toff’s unpopularity north of the border to secure a repeat independence ballot.

For his part, Johnson’s aim is to get Brexit through before levering a mandate, perhaps in early 2020 if he lasts until then. (George Canning’s 117 days in Downing Street in 1827 is the unwanted record to beat.) With no majority, a no-confidence motion looms. But not yet, for after the 24 July drama the Commons goes into recess until 3 September. Unless, as so often in history, an August crisis intervenes.

Brexit accomplished and a general election win are the two routes to Boris Johnson’s holy grail. One could conceivably happen without the other. But without the first, a quick unravelling of his premiership is likely. Do or die, all or nothing: the stakes could not be higher. That unforgiving verdict aside, such absolutism of choice and the prime minister with the task of navigating it look perfectly matched.

But this also focuses his great political challenge. Brexit’s polarisation, buttressed daily across the twittified political–media world, now squeezes classic politics as “the art of the possible.” Johnson, the former’s beneficiary and target, can only succeed, even in his own terms, by using its logic. That means bringing the less committed onside, in practice via a big-tent populism lodged in a recognisable Conservative–British idiom. His victory speech hinted at this before it descended to blather: “[At] this pivotal moment in our history, we again have to reconcile two noble sets of instincts. Between the deep desire for friendship and free trade and mutual support in security and defence between Britain and our European partners. And the simultaneous desire, equally deep and heartfelt, for democratic self-government in this country.”

It might be hoped that his cabinet jigsaw and the larger tone he sets will bring greater clarity. But that is not Johnson’s way. The blah-blah, with all its hostages to fortune, is integral to the act. In this sense there is pathos in his remark that, across two centuries, “we Conservatives have had the best insights into how to manage the jostling sets of instincts in the human heart.”

His more ideological allies, today exultant, are strangers to such complexity. Mature friends make a subtler case. They cite Boris’s ability as mayor of London to build a team, delegate and win loyalty as a template for his government. Harry Mount, who edited his Telegraph column for five years (“always late, always word-perfect”), calls him “essentially a cerebral introvert” whose various influences — a Turkish grandfather named Kemal, a mother stricken by mental illness, childhood semi-deafness, his family’s financial insecurity (albeit at high level) — gave him an “outsider status” that renders him “strangely unknowable.” They also “made him play up his P.G. Wodehouse Englishness.”

Such portraits occupy the narrow ground between adulation and hatred, as do Sonia Purnell’s critical biography and Andrew Gimson’s more sympathetic one. The formulaic animosity is feeding on itself to an extraordinary degree, as Brexit catastrophists seek new channels for their addictive fury. Many high-profile writers and publications, already hugely invested in a disastrous Brexit outcome, now equally have bet their reputational house on a Johnson government taking the UK to perdition.

In fact, there is no certain outcome of this or any other kind. The European Union does not represent “reality” and Britain “fantasy,” as is obsessively said. What is happening in the UK, and between the UK and EU, is politics rather than destiny. Boris Johnson may be more likely to fail, or at best reach another messy trade-off, than to reach his grail. But in the end it’s not about him. After three years on Theresa May’s desolation row, politics — old and new mixed — is breathing a little freer. Whatever happens next, this is a good day for democracy. •

Television | Does The Loudest Voice let the former Fox News supremo off too lightly? 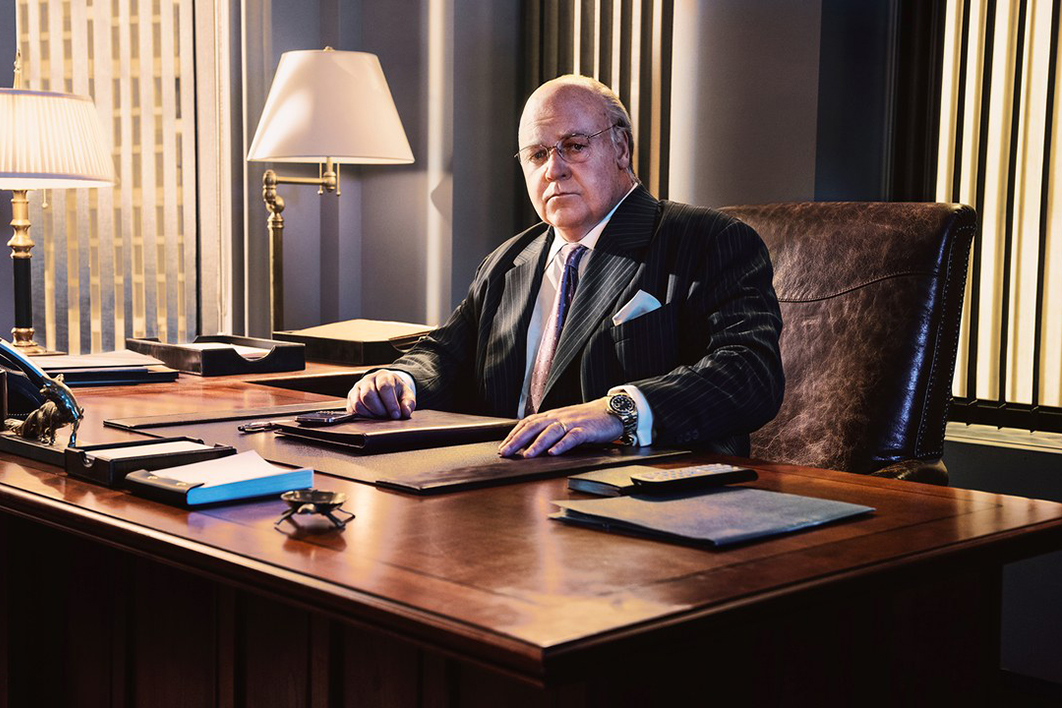